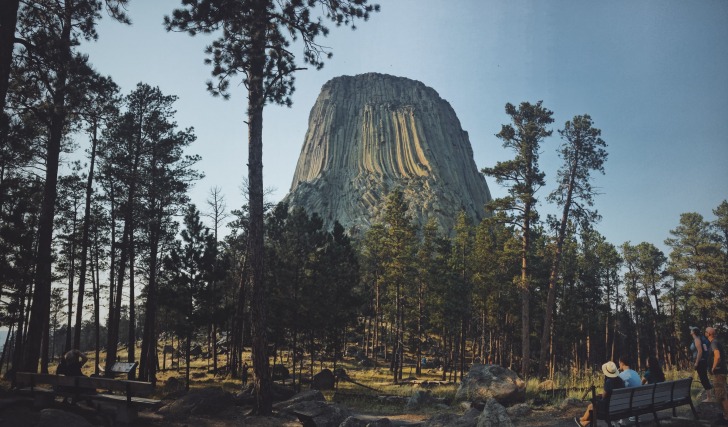 Wyoming is a beautiful mountainous rural state with the smallest population in the nation with 578,000 residents.

There are 30 cities in the United States with more people.

It is not the smallest state but has the second-fewest people per square mile in the nation at six.

Wyoming is filled with natural wonders.

Yellowstone National Park is northwest of the Rocky Mountains.

It is famous for cowboys, rodeo, and the great outdoors.

There are huge mountains, deserts, lush wilderness, and sometimes you can drive for hours without seeing another person.

Cheyenne is the biggest city, and Casper is second.

Both have a lot of Old West history.

They are the only two towns with more than 50,000 people.

There are very few pickpockets in Wyoming. This crime is rarely reported. People carrying less cash, and cards being more secure, has made this crime less desirable than it used to be.

Wyoming has the seventh-highest rate of earthquakes in the nation. Fortunately, most are not in populated areas, but that there are a lot gives one pause. This also leads to a lot of mudslides. There is not much, if any, flooding, but the mountainous areas present their dangers. There can also be heavy snow in winter.

The violent crime rate is very low in Wyoming, below the national average in many categories, including mugging. It does not happen a lot in rural areas. More common crimes are property crimes when doors are left unlocked.

Terrorists have not attacked rural areas, and they have never attacked Wyoming. In recent years there has been growing concern about domestic terrorists from extremist groups. The state does have a high gun death rate, but that has not been due to terrorism.

Tourists are rarely scammed. In tourist areas, sometimes tourists are charged more than locals, but you can also see that as locals getting a discount. Scammers are usually trying to do identity theft or take advantage of elderly people. It is rare, but at times people add charges to credit cards.

Women often travel alone in Wyoming, and it is not seen as unusual. Women even hike alone in wilderness areas and are safe. The dangers here are the same as they are for men. Most of them are from natural causes.

Most tap water comes from underground and is very safe. There are no known issues with any of the state’s water systems. The concern in Wyoming is having enough water. It is a dry state and getting dryer with global warming. The concern then is the availability of water, more than the quality of water.

Safest Places to Visit in Wyoming

Surprisingly, perhaps, the safest places to visit in Wyoming might be the two biggest cities, Cheyenne and Casper.

Both have very low crime rates, and both are small enough to not feel overwhelmed.

Both have a lot of history and interesting things to see.

Yellowstone National park and Grand Teton National Park are also safe places to visit because of the low crime rate.

There are natural dangers in Yellowstone.

These are great natural areas, and they are tourist areas.

There are a lot of safety precautions built-in with these areas.

If you stay on the beaten path there is little danger.

The small towns of Worland, Torrington, and Green River have very low crime rates and are safe any hour of the day.

In many states, the rural areas are the safest and that may not be the case with Wyoming.

Placess to Avoid in Wyoming

It sounds strange, but the highways are the most dangerous place in Wyoming with one of the highest deaths per capita in car crashes.

U.S. Highway 287 is a two-lane road that goes through two mountain ranges.

Severe weather and low visibility are common. It is one of the most traveled roads in the state.

While Yellowstone National Park is generally safe, there are dangers from geysers, hot springs, and animals like bears.

In the western part of the state, avalanches and mudslides are a problem and can surprise the unwary traveler.

One of the most dangerous towns in Douglas.

It has the highest property crime rate in the state but is still just barely above the national average.

The most dangerous mountain bike trail in the world could be Lunatic Fringe on the Green River.

A four-mile trail has a four-mile elevation change of 6,155 feet and drops as high as seven feet.

Safety Tips for Traveling to Wyoming

So... How Safe Is Wyoming Really?

Wyoming is unique among the states when it comes to danger.

Crime is the biggest danger in most states, but that is low here.

In Wyoming, you are more likely to be injured in a car crash or hurt while out in nature.

Wyoming has 19.2 deaths per 100,000 people on the highways, which has been in the top five nationally for several years.

Wyoming is the least-populated state, and its’ total number of car-related deaths, 100 last year is among the lowest totals.

Speed limits are high and there are remote areas.

You can drive 70 mph on two-lane highways, and 50 on dirt roads, which is above the national average as well.

There are also a lot of remote two-lane highways through the mountains where the weather can be an issue, with a lot of turns and steep roads.

There are geysers and hot springs, as well as black bears, which is dangerous if not respected.

Crime rates have been below the national average for a few years.

The low level of crime is one thing, but how concerned local people are about the crime is another great measure.

Wyoming leads the nation in having the fewest number of people concerned about crime, with only 26 percent saying they have any concern about being a crime victim.

Wyoming residents are much less concerned about things like violent crime, property crime, and gun violence than any people in any other state.

How Does Wyoming Compare?