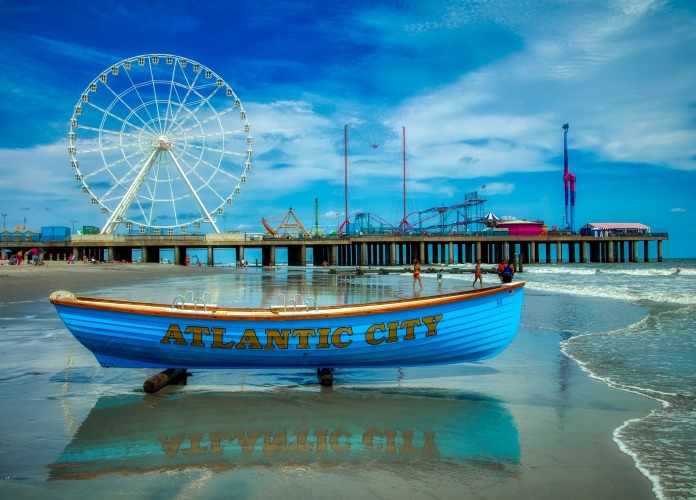 New Jersey has a reputation for being the home of the mob and organized crime, but that may be more theater than reality.

Some recent crime studies suggest it may be one of the safest states in the country.

New Jersey is known for Atlantic City, which is a crowded tourist spot.

It is also known for beaches and boardwalks as well as charming coastal towns.

New Jersey is the most densely populated state in the nation.

There are not many rural areas in this state, but there is a lot to see and a lot of people around.

If you want an action-packed vacation, New Jersey would be a good place to consider.

Every county in the state is listed as an urban area.

One unique feature is that New Jersey is one of the few states where an attendant pumps gas for your car.

USA Today ranks New Jersey as the fifth safest state in the nation. Its violent crime rate of 208 per 100,000 people is the lowest in the nation. There is still a good bit of crime in certain areas. If you stay in good areas, it is very safe.

New Jersey has the third-largest public transport system in the nation. The system is huge, but it is also well run for the most part. Taxis use certified drivers, which makes them safer than Uber in most cases. The taxi company is liable if the driver causes an accident. It may be hard to figure the system out, but once you do, it's clear sailing.

Pickpockets seem to be a dying breed. There were reports of an increase in this crime in some areas of New Jersey, but for the most part, it is not a problem. Maybe it is because people are carrying less cash, and credit cards are more secure than ever, but it seems to be a crime that is fading away.

There are occasional hurricanes that can create a disaster, but this far north they are rarely all that strong. New Jersey is relatively flat, so there is little earthquake activity. There can be heavy snow that can cause problems on a wide scale at times.

A lot of New Jersey is safe and there is little risk of being mugged. There are certain towns though, that has a high crime rate, like Trenton and Camden, and you could get mugged there. You can get lost and end up in a bad area, which raises the danger level to medium.

We rate this medium more because of the potential for terrorism than actual events. There has been very little terrorism here. There has been some domestic terrorism small scale. Still, in a densely populated state like New Jersey, the area could be an inviting target.

Scams in New Jersey tend to target older residents, as opposed to tourists. Common scams are done over the phone, with people pretending to be from a government agency, trying to get personal information from people. Identity theft has been a real issue.

New Jersey has the lowest rate of rape in the nation, which is one good sign. It is safe in general though, as people in New Jersey are used to seeing women traveling alone. Standard precautions you would take anywhere should keep you safe in New Jersey.

Water is safe when it leaves the water treatment plant. The problem is aging pipes that contaminate the water at times. The city of Newark has had boil orders a few times. There have not been any deaths reported, but there are signs that pollution is relatively common.

New Jersey has a low crime rate, and many cities are well below the national average in crime.

Atlantic City has its good and bad sides.

The good side is the northern part, where the crime rate is extremely low, but the city itself is above the national average.

Beaches are generally safe as well.

Most small towns around the state are safe as well.

The low crime rate speaks for itself.

There is still crime though, so it is best to remain vigilant and protect yourself and your property.

Placess to Avoid in New Jersey

There are some towns with a high crime rate and a bad reputation, such as Newark, Trenton, Patterson, and Camden.

There are more cars stolen n Newark than in any other city in the nation.

In Atlantic City, local officials warn against wandering off the beaten path, especially at night.

Asbury Park is also a town with a high crime rate.

Check out crime maps of various parts of New Jersey to get a feel about where most crime happens.

While some areas are dangerous, crime is often a matter of opportunity.

Be smart and don’t put yourself in a position to be robbed.

So... How Safe Is New Jersey Really?

According to law enforcement statistics, it is pretty safe.

There are still areas where it is not safe, but New Jersey has one of the lowest crime rates in the nation.

USA Today rated it the fifth safest state in the country.

This is well below the national average.

New Jersey is at the top of the list for low crime in several categories.

New Jersey also has a fairly low poverty rate at 9.5 percent, which would also cut down on crime.

The main areas where tourists would be going, such as the beach or Atlantic City, have a high presence of law enforcement, which also cuts down on crime.

If you stay in the tourist areas and don’t wander too far from the beaten path, there is little risk of having any trouble.

Camden has the highest crime rate, with Patterson, Asbury Park, Newark, and Trenton all having crime rates above the national average.

Even those areas are fairly safe in the daytime.

It has improved but still has a high crime rate.

There are a lot of people living in New Jersey, and it can be crowded in densely populated areas.

Still, there seems to be not all that much crime reported.

There are several good-sized cities in the state and they all have typical problems that cities have.

Given the dense population, it is a little surprising that the crime rate is so low, but law enforcement takes a proactive approach to prevent crime.

A strong police presence can be a deterrent to some crimes.

How Does New Jersey Compare?