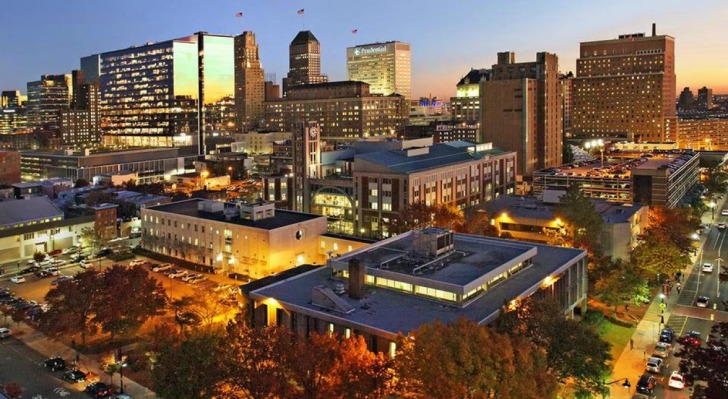 Less than 20 miles from the Manhattan skyline, Newark, New Jersey, sits just across the state line and in what feels like a different world.

This is a working-class community, away from the New York penthouses, with a charm all its own.

Newark might sound a lot like the words New York, but it’s a whole different conversation we need to have about what to see and do here.

Newark is also the home of Rutgers University, a busy port, and its own busy airport.

Most of the hotels are centered around Newark International, but it’s a perfect location for busy travelers who want to be part of it – New York – while still enjoying a different side of the region.

You’ll have a lot of train traffic going through this railroad hub too, but you also have unique places to explore.

Ironbound is a neighborhood known for its fantastic dining for all budgets.

This historical neighborhood was built by immigrants looking for industrial jobs.

The Newark area keeps a lot of economic movement going 24/7 for one of the most populated portions of the country and international trade.

The average income here is less than $37,000 a year, and 26%of the city lives in poverty, so you shouldn’t look for bougie places to stay or play.

When you want salt-of-the-earth people with working-class culture, this is a great place to visit.

Newark was one of the most dangerous cities in the country in the late 90s. It was a place we'd likely advise against you visiting for any reason. The tides have turned with a stronger police presence and strategic policing. While there's still a medium risk here, we celebrate the improvements made in the past 25 years and hope it continues for the next 25.

NJ Transit can get you anywhere in New Jersey and connects to New York City. Buses are available as well. Taxis and rideshares are easy to find, and if you prefer to drive a rental car, you have major highways that can get you anywhere on the eastern seaboard. There's low risk with any option, but extra caution should be used when using public transportation.

The pickpocket and purse snatching risk here are surprisingly low, with less than 100 reported for the past six years. In 2021, just one pickpocket was reported. That should not, in any way, cause you to let your guard down. Be especially vigilant when riding crowded buses or trains and during loading and unloading.

Harsh winter weather, impacts from hurricanes and tropical storms, plus the risk of flooding are the major concerns here. It's a medium risk when the weather is acting up, but overall, if you can handle cold and wintry weather, you'll be just fine here.

The robbery risk is about 30% higher than the national average, so you should still use an abundance of caution when you're out - especially at night. Stay away from industrial areas, and don't go into neighborhoods if you don't have a reason to be there.

Since it's part of a massive population area and such a huge shipping port, there's medium risk. This risk comes with a lot of extra security, on top of the airport security that prevents danger from entering the country by air.

Locals face scam risks like fake contractors or bogus utility payment demands, but there isn't anything a tourist should worry about other than being long-hauled by a taxi driver. You still should always have your guard up and avoid anyone who appears randomly offering a "great deal."

Women actually have a 13% lower risk of being a victim of a violent crime than men, according to 2021 crime data. The sexual assault rate is half the national average. While the same guidance of "don't walk around at night alone" still holds, there's the same risk for women and men. Nothing in the crime data suggests women are at a greater risk of any specific crime.

Newark is the first city in the nation to replace all outdated lead pipes, which contribute to water quality issues beyond the point where the water treatment plant can fix them. That's an outstanding step. The 2021 Water Quality Report showed one violation that wasn't related to dirty water. It was a reporting issue and was quickly fixed to show full compliance with all requirements.

Safest Places to Visit in Newark

It’s worth noting a Google search for Newark will bring up some websites in Newark, California, which is nowhere near New Jersey.

You can download the Newark Walks app to get free walking tours of the historical and unique parts of the city.

The Grammy Museum Experience at Prudential Center is much more than a series of pictures on a wall and stories of the greatest artists ever to sing or pick up an instrument.

Sure, that is included, but you can also have a virtual experience of accepting your own Grammy, hopping on stage, and playing an instrument, with special exhibits like “A Hip Hope Life” exploring the legacy of this music to Americans.

When you walk out of Neward Penn Station, you’ll be in the Ironbound neighborhoods.

The name was given to this area because it is “bound” by railroads.

When you see it on the map, it looks like a big industrial area (which it kinda is), but there’s an idyllic Main Street feeling with New Jersey vibes that brings you dining, bars, and shopping that can best be described as urban charm.

There’s a riverfront park on the Passaic River with playgrounds, walking/biking paths, boat rides in the summer, and a soccer field.

This is the only park on the water in the city.

With more than 5,000 trees across 360 acres, it’s a sight itself, but you’ll be mesmerized by the beautiful Cathedral Basilica standing in majestic glory nearby.

Places to Avoid in Newark

Try to stick north of I-280 and east of Broad Street.

The neighborhoods west of that area are hit or miss when it comes to crime, and some of the neighborhoods, like South Broad, West Side, and Springfield-Belmont.

There isn’t much to lure you into these neighborhoods anyway.

While Newark is the biggest city in New Jersey, you have to remember that New Jersey is a small state.

Do not touch or swim in the Passaic River water.

It’s one of the most polluted in the country, and even the EPA is involved with pulling toxic mud from the water as just one step in a massive undertaking.

You’ll see rowers on the water, but that still doesn’t mean you should attempt to do so.

I am not being extra cautious with this advice – I’m just being honest.

That water is nasty and potentially dangerous for a variety of toxins.

Safety Tips for Traveling to Newark

So... How Safe Is Newark Really?

It’s so much safer than it used to be, but that shouldn’t give you a false sense of safety.

At one point, it was at or near the top of the “Most Dangerous City in America” list.

Now it doesn’t even make it into the Top 100 Most Dangerous Cities.

The violent crime rate is 15% higher than the national average, and robberies are 30% higher.

What’s particularly impressive about the improvements here is that this is an underserved community with historically high poverty rates and low-income levels.

For half a century, this was a “Most Dangerous City.”

Poverty usually breeds more crime, but the Newark plan of community policing is working where other cities can’t seem to connect the dots.

“One of the things that’s happening in Newark is that we’re seeing a real paradigm shift around this idea that law enforcement exists as this ubiquitous agency that is responsible for all of safety and community,” Aqeela Sherrills of the Newark Community Street Team, said.

“The development of community violence intervention, or what we call community-based public safety, has been really important in the city of Newark as a complementary strategy to our policing.”

I actually thought there was a computer issue when I started looking at the data here.

However, improving “awful” can still result in “bad.”

The noteworthy part is that change is happening.

To bring a dose of reality back, tourists need to know that 64% of violent crimes happen in public, and 34% of those were against strangers.

A whopping 74% of robberies happen in public places.

On top of all that, Newark has odd smells and a polluted river.

If you’re coming here to seek out your New York region dreams, you won’t find that in Newark – no matter how good the hotel deal is.

Consider all the factors before booking a hotel room here.

How Does Newark Compare?