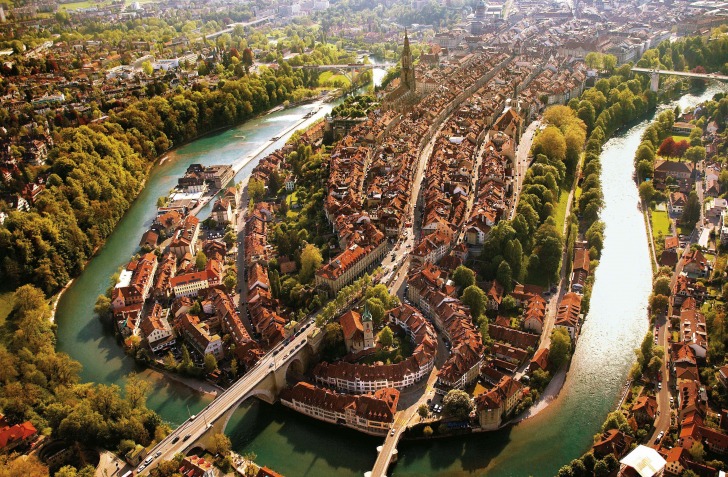 Switzerland - safety as a country

Bern is the capital of Switzerland, it’s a medium-sized city with a population of about 130,000.

It sits on a peninsula formed by the meandering turns of the river Aare.

Also, of interest to visit are stunning natural places and parks:

The Gurten Hill –  is a lovely hill just outside the city. It features a park and great view over the city on one side and a nice panorama of the Bernese Alps on the other.

Bern is a safe enough city, the level of crime is low. Travelers should be vigilant, use common sense and follow the same safety precautions as you’ll be used in every Europe country.

Taxis and public transport are absolutely safe to travel at any time of the day or night. Public transport runs on a clear schedule and you can always know exactly when to expect a bus or tram.

Petty robberies as pickpockets happen in Bern, mainly in public transport or in crowd tourist places. Be on the alert.

Most often, the Bern region is not prone to natural disasters. There is little risk of an earthquake. As usual, check out reliable sources of information on this subject before traveling here.

Stealing vehicles in Bern may occur if you don't lock your car or bicycle. Travelers may become a victim of a robbery on streets if they appear at late night in city suburbs. Be careful while walking by the city late at night.

There no terror cases in Bern last time. However, as elsewhere, you should be alert and study the news before a visit.

Normally in Bern, there is no scamming. However, like in every capital city, petty cheats with tourists can occur. Be careful and book your accommodation and entrance fees to museums/performances in licensed sources.

Women traveling alone in Bern can feel absolutely safe at any time of the day or night.

So... How Safe Is Bern Really?

Traveling in Switzerland is safe, it’s highly ranked on the list of the safest countries.

Petty crimes like pickpocketing and phone and handbag snatching are on the rise in recent years.

But anyway Bern has a low index of crimes.

However, as it is the capital, political demonstrations occur here and sometimes leading to police intervention.

On the central railway station often you can see drunks and vagrants at night, but they are rarely dangerous.

The real problem is groups of drunkards, who should be avoided as they sometimes look for a fight.

Police officers in Bern always help you out if you are in trouble or need information.

They are also can ask for documents to “suspicious” persons.

Be sure you carry a photocopy of your passport and your onward ticket with you and stay calm and polite.

It is also necessary to keep in a safe place your vehicles: there are cases of theft of bicycles and scooters, as well as carjacking.

However, tourists should provide normal caution for free of violent crimes.

Walking alone at nights usually safe if you follow the basic precautions.

How Does Bern Compare?