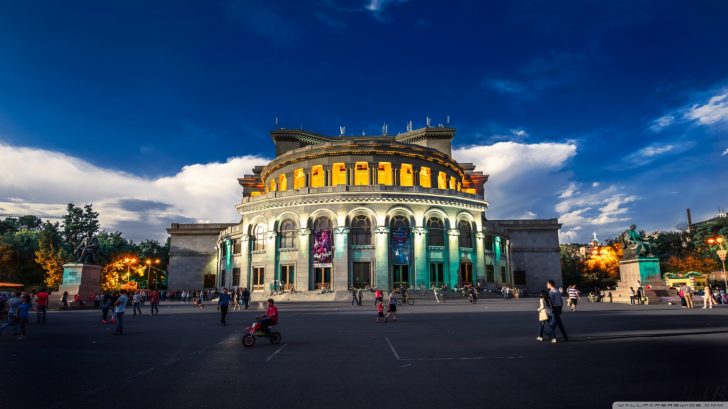 Armenia, officially known as the Republic of Armenia is a country located in the South Caucasus region of Eurasia.

This landlocked country shares its borders with Turkey to the west, Georgia to the north, Iran to the south, Azerbaijan to the east, and Azerbaijan’s Naxcivan exclave to the southwest.

Geographically, an interesting fact about this country is that – as high as 5% of Armenia’s territory consists of Lake Sevan (Sevana Lich), which is the largest lake in the Lesser Caucasus mountain range.

Apart from this, Armenia flaunts remarkable natural landscapes: due to its mountains and mountain valleys, Armenia’s climate varies a great deal, and it’s not just climate that varies from region to region: Armenia’s scenery is gorgeous, with dry areas to a lush forest at the top of mountain ridges.

As for attractions in this country – you can choose from medieval monasteries all over the country (known as the number-one attraction), gorgeous landscapes perfect for hiking and climbing (if you’re the nature-loving type), and the wonderful experience of visiting Yerevan – which many say is the most endearing landmark to visit while here.

Armenia is overall safe to travel to, with considerably low crime rates and even pickpockets not being that much of an issue. However, it is advised that you remain vigilant at all times, especially when crossing the streets.

Transport is generally safe in Armenia, but be careful when taking a taxi, especially at Zvartnots International Airport. There might be taxi drivers trying to overcharge you ridiculously for a drive to town.

Pickpocketing exists in Armenia and you should remain vigilant and make sure not to flash your belongings in crowded places such as bus or train stations, or public transport. Be careful and keep your valuables close by your side.

Floods are the biggest natural threat in Armenia: there was a flooding in 2010 that caused an estimated US$ 10 million in damage. Armenia also faces droughts, hail storms and landslides.

It is not likely you will get mugged or kidnapped in Armenia. Crime rates are generally not too high and violent crime against tourists is unlikely. Still, don't let your guard down and stay away from dark and deserted areas of bigger cities.

Even though there haven't been any terrorist attacks in Armenia's recent history, they shouldn't be ruled out, so be aware of your surroundings at all times.

There is the issue of scams in Armenia, just like in any other country, and the most common ones are credit card and ATM scams. Be careful when picking up your many from ATMs, especially those that accept VISA credit cards: they might withdraw money from your account but not deliver it to you! Always negotiate everything in advance, double check your change and never pay anything upfront. Never accept drinks from strange people or leave your drink unattended.

Armenia is definitely safe for solitary female. Just use your common sense and have your wits with you. Avoid poorly lit and deserted areas at night and finding yourself in places filled with drunken people.

So... How Safe Is Armenia Really?

Generally, Armenia is safe to travel to and Yerevan is really not a dangerous city to be in.

However, even though crime rates in Armenia are not through the roof, it is still recommended that you remain vigilant at all times, especially at night.

Use common sense if you’re going out at night, especially if you plan on drinking because you might encounter people willing to start a fight.

As for scams, there are some well-known scams related to ATM machines, particularly ATMs that accept VISA cards, where the machine withdraws cash from your account, but you receive no money!

Another known scam happens on Zvartnots International Airport, with people asking tourists if they need a taxi, and when they find people who do, they take them to a taxi that costs two or three times more than a regular taxi.

Whatever they say, do not trust those people, even if they’ve already packed up all your luggage in the trunk: taxi rides from the airports usually cost around 2,000-3,000 dram instead of the 10,000 drams they are asking.

They can be very convincing saying that the ride really costs that much, and that’s how many tourists have been tricked.

Generally, be careful when using taxis and other means of transport: if you want to check if a car is a real taxi, look at the number plate: if it is yellow or the first are 3 digit numbers (and NOT 2 digit), then it is a taxi you can use and not worry about getting scammed.

How Does Armenia Compare?