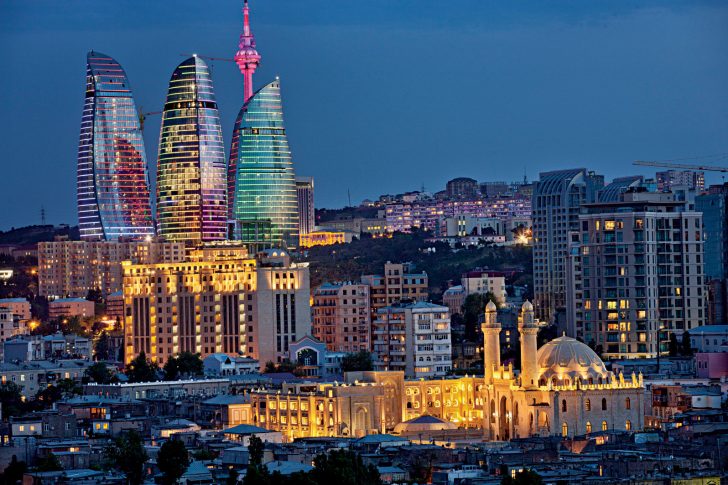 Azerbaijan is a former Soviet republic that lies on the Caspian Sea, in the Caucasus.

It shares borders with Russia and Georgia to the north, Armenia to the west, and Iran in the south.

Through the autonomous exclave of Nakhchivan, located between Armenia and Iran, Azerbaijan also borders with Turkey.

Azerbaijan often referred to as the “land of wonders” is a country of many wonders.

It’s capital, Baku offers amazing architecture and traces of this country’s ancient history are visible with every step you take in this city.

This country that is neither in Europe nor in Asia offers geographical variety with mud volcanoes and the curious fire phenomena in the surrounding desert area, and if you move further, you will encounter rural villages surrounded by orchards in front of timeless Great Caucasus Mountains.

Such natural contrasts are a rarity and if you do visit Azerbaijan, though these wonders will amaze you, the warmth of its people is what will make you want to stay.

Azerbaijan is overall relatively safe to travel to, with both petty and violent crime to keep in mind and watch out for. It is advised that you remain vigilant at all times, especially when crossing the streets.

Transport in Azerbaijan is generally reliable and safe, though you should be careful when on public transport as you might encounter pickpockets. Taxi drivers might overcharge you for a ride so negotiate everything in advance.

Pickpocketing levels are extremely high and you should remain vigilant at all times, making sure not to flash your belongings in crowded places such as bus or train stations, or public transport. It is especially widespread around Baku. Be careful and keep your valuables close by your side.

Azerbaijan is susceptible to many natural disasters such as earthquakes, seasonal floods and landslides, though man-made disasters add to this number: there are many industrial disasters and transport accidents.

Mugging and other forms of violent crimes are on the rise currently in Azerbaijan. Avoid going out at night especially around areas filled with bars and clubs, where you can encounter intoxicated people. Male tourists are more targeted for violent attacks than female.

There is a certain likelihood of terrorist trying to carry out attacks in Azerbaijan, and these attacks could hit at any times and affect locals as well as tourists. Remain vigilant and aware of your surroundings at all times.

There are many scams and frauds performed on tourists in Azerbaijan: street vendors and cab drivers might try to cheat you and rip you off if you are not careful. ATM frauds happen, though they are not too common. You may encounter people pretending to be police officers, targeting tourists and extorting money. "Fake" tickets can also be issued on roadways by fake policemen. Be wary of women approaching you in clubs and leaving you with a ridiculously high tab to pay.

For a woman, especially if she's a lone in Azerbaijan, it can be pretty tough. A golden rule for women is that they shouldn't be out alone after 9pm. Of course, the general rules of precaution apply for all other times of day: avoid poorly lit and deserted areas at night and never find yourself in places filled with drunken people.

So... How Safe Is Azerbaijan Really?

Azerbaijan is relatively safe to visit but you should watch out for both petty and violent crime.

In Baku, the capital of Azerbaijan, you should expect crime like in many cities around the world, but the problem here is that petty crime made way for more violent types of crime, some of them involving foreigners.

Surprisingly, male tourists are more targeted than female ones and these attacks occur with groups of men just approaching and attacking unsuspecting tourists.

These crimes happen more during the winter months.

So avoid drinking and roaming around the tourist frequented areas such as Fountain Square and the Maiden’s Tower, and know that in case something happens, you can’t really rely on the police.

Expect corruption in this country – the police will expect you to pay if you want anything from them.

Avoid giving them any bribe.

If you are traveling outside of the city, do it during the daytime.

The roads are filled with potholes and bumps and driving at night is advised against.

Apart from the potholes, drivers in Azerbaijan often drive with dimly lit cars, so accidents are common.

Keep in mind that you might easily get scammed or attacked in this country, especially if you go drinking to a tourist bar.

One of the scams involves a woman approaching you for a drink and leaving you an astronomically high tab.

If you refuse to pay, a group of men approach you and demand you do, threatening to beat you up.

Azerbaijan is filled with scammers so be very careful.

How Does Azerbaijan Compare?