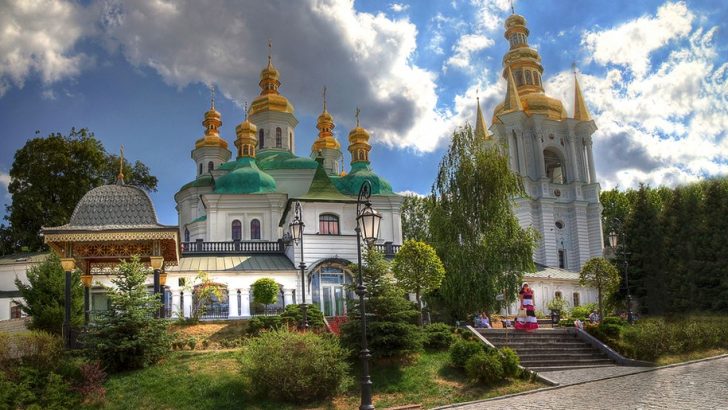 Ukraine is a country located in Eastern Europe, situated at the northwest end of the Black Sea, sharing its borders with Russia to the east, Belarus to the north, Poland to the northwest, Slovakia and Hungary to the west, and Romania to the southwest and south, with Moldova in between.

Unfortunately, Ukraine is partly occupied by Russia and troubled by political turmoil, so visiting it is not entirely safe.

There are many sights Ukraine offers to its visitors like UNESCO listed Lviv center, Residence of Bukovinian and Dalmatian Metropolitans in Chernivtsi, Saint-Sophia Cathedral, and Pechersk Lavra in Kyiv.

If you’re more of a nature lover, you can visit the Carpathian Mountains which are one of the most visited attractions in this country.

They are considered to be the Green Pearl of Ukraine, with popular tourist resorts, offering a mix of natural areas, forests, meadows, and sights like shepherds and locals enjoying being surrounded by pure nature.

Generally speaking, Ukraine is not too safe for visitors. It is a country where travelers aren't too common, but if you do visit, there are areas that should be avoided at all costs.

Pickpockets are a serious issue in Ukraine, and it occurs everywhere so you should be careful particularly in crowded places, in tourist areas, in bars and nightclubs, and on public transportation.

As for natural disasters, what still represents the biggest issue in Ukraine is the legacy of the Chernobyl disaster. It is also susceptible to frequent flooding, freezing winters, storms, and mine disasters.

As for violent crime, it has been on the rise in Central Kyiv, especially after dark. This includes muggings, and armed robbery, particularly in the larger cities.

Terrorists are likely to try and carry out attacks in Ukraine, and the authorities in Ukraine have announced that they have already disrupted numerous planned attacks, including in the capital, Kyiv.

Scamming is also an issue in Ukraine. There are famous scams over dating sites where the victims are asked to send money to their prospective date in order for the date to be able to leave Ukraine, and then after the money is sent, the relationship ends. Apart from online scams, be careful on the streets, keep an eye on your drink and check your change twice.

Ukraine is not a safe place for solo female travelers. Crime is widespread throughout the country and there is political turmoil as well as terrorism threats disrupting peace in the country. Do not go anywhere alone and avoid dark and deserted areas.

So... How Safe Is Ukraine Really?

Ukraine is not safe for travelers, and there’s a huge threat if you plan on traveling near parts occupied by Russia.

These parts are Luhansk, Donetsk and Crimean regions and the Ukrainian government currently has no jurisdiction there.

And even though bad blood between Russia and Ukraine is unlikely to affect tourists, you should know that there are no government services like police, hospitals, firefighters, ambulance services, etc.

Crossing from Russia into this part of Ukraine is illegal while crossing into Russia is also strongly recommended against.

Avoid traveling to Chornobyl and the whole radiation zone, including the ghost city of Pripyat’, but if you still want to visit it, go accompanied by a tour, as traveling alone to these parts of the country is forbidden.

Do not leave your tour group or separate from them, as it can result in fines and radiation that may cause serious illnesses and health issues.

As for crime, you should try and lay low and refrain from showing the fact that you’re a tourist or your belongings.

Try to fit in as foreigners are still rare in this country.

Kyiv, Odesa and other major cities are more accustomed to tourists, which is why pickpockets here are more common, especially in crowded places like metro, bus and train stations.

How Does Ukraine Compare?