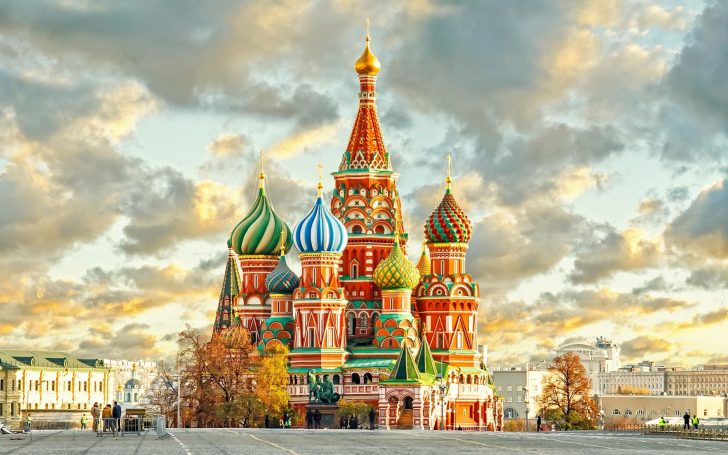 Russia is the largest country in the world, spreading over more than one-eighth of the world’s inhabited land area, stretching over two continents – Eastern Europe and northern Asia.

Russia is an immensely large country, and it offers an extremely large amount of tourist attractions, though many of them can be found on the remote and hard-to-reach parts of the country.

However, the best-known ones are precisely in the urban parts and cities like Moscow and Saint Petersburg.

Talking about Russia’s landmarks and attractions itself would take a couple of hours.

Russia’s history attracts the most tourists, as they are fascinated by its surreal and sometimes brutal but nevertheless thrilling and jawdropping national story.

It is told in Russia’s numerous museums some of which are among the world’s greatest, for example, the Hermitage Museum in Saint Petersburg, which is truly known all around the world.

However, there’s plenty to see and do if you’re a nature lover too.

Though there are large spaces between them, Russia offers many natural wonders.

In this sense, Siberia is the first to be mentioned, with Lake Baikal like a perfect ornament, known as its “jewel”.

Generally speaking, Russia today is safe as much as other countries in Europe, despite its problematic history with criminal activity in the 90s. However, if you’re planning on traveling to Russia, keep in mind that you should avoid regions close to the Ukraine border, this is not recommended, because of the high level of risk and unstable situation in the region of Donetsk, Lugansk, and Kharkiv.

Generally speaking, transportation in Russia is safe, but you should bear in mind that kidnappings have been known to happen, mostly in unlicensed taxis, so be careful when hailing one on the streets. Keep in mind that the most dangerous areas where small crime tends to occur are the underground walkways, called “perekhods”. Only use official services like Yandex Taxi, Uber or Gett taxi.

Pickpocketing is very common in Russia, and surprisingly it is mostly performed by groups of children. Pay attention to your belongings, don’t leave them in plain sight and be especially careful in crowded places like stations or near tourist attractions.

Russia isn’t particularly susceptible to natural disasters. Some blizzards are possible during winter which can cause affect the traffic and delay your flights. Also, in areas near Mongolia and Kazakhstan, earthquakes can happen sporadically.

Kidnappings for political reasons have happened in the North Caucasus, and there have been reports of foreigners being attacked there. Generally, never accept free drinks or food when you’re in a club or a bar. Drink spiking and then attacking and robbing the victim have been reported on numerous occasions.

Recent military interventions in Syria have caused high terrorism activity in the areas of Chechnya, Dagestan, Ingushetia, North Ossetia, the south-east part of Stavropol bordering Chechnya, Gabardine-Balkaria (including the Mount Elbrus area), and Karachay-Cherkessia. Apart from that, terrorist attacks have recently taken place in St. Petersburg.

There is a world-known scam typical for Russia: scamming people through dating websites. When the victim gets to know a person from Russia via a dating website, and the relationship develops, the victim is asked by his/her (usually men are the victims here) partner to transfer some money to the country where the future partner lives, to make her/his trip to the victim’s country possible. After the money is transferred, the relationship ends. As for scams on the streets, you should avoid playing street gambling games.

Women are generally safe in Russia, though you should avoid finding yourself alone in clubs or bars, and of course, apply all normal precaution measures like avoiding remote and poorly lit streets and areas.

So... How Safe Is Russia Really?

Russia experienced a rise when it came to crime rates during the 1990s.

Violent crime, as well as petty crime and scams,  have increased, but the biggest part of the violence was within the criminal groups themselves, and it didn’t affect foreigners that much.

However, it decreased since the 90s, so right now, for tourists, major cities like Moscow and St. Petersburg aren’t more dangerous than any other European city, they’re even less so.

The crime rate in Moscow, for example, is fairly lower than one in New York, London or Paris, so you should feel safe here.

When it comes to the authority officials, you should keep in mind that they usually don’t speak English, so don’t expect any English by them outside of the major cities.

Speaking about the officials, don’t ever try to bribe them: you will be charged with bribery.

Bear in mind that if you are a member of LGBT community, there is no reason to avoid Russia altogether but you should refrain from any public displays of affection since, as of June 2013, “homosexual propaganda to minors” is prohibited, which basically means that any discussion of gay rights or homosexuality issues in the presence minors is punishable by law.

Tourists are also strongly advised against traveling to the North Caucasus, as that region is considered to be the most dangerous in the entire country.

The area has a bad reputation as there have been incidents of terrorist and criminal activities there as well as cases of both corruption and lawlessness.

How Does Russia Compare?