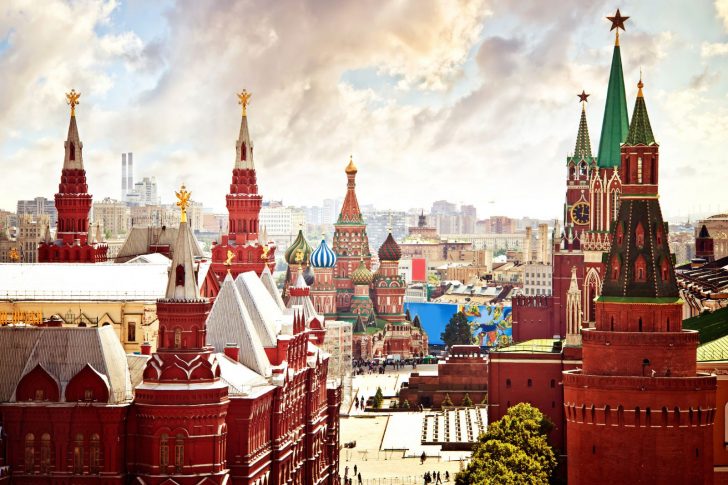 Moscow, the capital of Russia, is a political, scientific, historical, architectural and business center of this huge country.

It’s one of the most visited places in Russia, and for good reason.

The best-known parts of Russia are concentrated precisely in the urban areas and cities like Moscow and Saint Petersburg.

Moscow’s history attracts the most tourists, as they are fascinated by it is a surreal and sometimes brutal but nevertheless thrilling and jaw-dropping national story.

In this city, visited by 17 million tourists annually, the history, told in its numerous museums, some of which are the world’s greatest, interacts with modernity.

For example, in the Garden of Fallen Monuments (Fallen Monument Park), you can see entire clusters of modern art contrasting with the very non-conceptual Communist monuments.

Generally speaking, Moscow today is safe as much as other cities in Europe, despite its problematic history with criminal activity in the 90s. However, if you’re planning on traveling to Moscow, keep in mind that you should always keep your guard up and remain aware of your surroundings, just in case.

Generally speaking, transportation in Moscow is safe, but you should bear in mind that kidnappings have been known to happen, mostly in unlicensed taxis, so be careful when hailing one on the streets. Keep in mind that the most dangerous areas where small crime tends to occur are the underground walkways, called “perekhods”. Only use official services like Yandex Taxi, Uber or Gett taxi.

Pickpocketing is very common in Moscow, and surprisingly it is mostly performed by groups of children. Pay attention to your belongings, don’t leave them in plain sight and be especially careful in crowded places like stations or near tourist attractions.

Moscow isn’t particularly susceptible to natural disasters. Some blizzards and snowstorms are possible during winter which can affect the traffic and delay your flights. During winter, be prepared to face the below-freezing temperatures.

The situation improved drastically when it comes to kidnappings and muggings. Generally, never accept free drinks or food when you’re in a club or a bar. Drink spiking and then attacking and robbing the victim have been reported on numerous occasions.

After the recent terrorist attack in the subway in St. Petersburg the probability of this situation happening again in Moscow is very high.

There are many scams in Moscow, usually performed by children trying to distract you and then steal some money from you. Never talk to strange kids on the street. Also, you should avoid playing street gambling games.

Women are generally safe in Moscow, though you should avoid finding yourself alone in clubs or bars, and of course, apply all normal precaution measures like avoiding remote and poorly lit streets and areas.

So... How Safe Is Moscow Really?

Moscow experienced a rise when it came to crime rates during the 1990s.

Violent crime, as well as petty crime and scams,  had increased, but the biggest part of the violence was within the criminal groups themselves, and it didn’t affect foreigners that much.

However, it decreased since the 90s, so right now, for tourists, Moscow isn’t more dangerous than any other European city, it’s even less so.

The crime rate in Moscow is fairly lower than one in New York, London or Paris, so you should feel safe here.

Also, you can count on the officials to be uncorrupted – don’t ever try to bribe them: you will be charged with bribery.

Bear in mind that if you are a member of the LGBT community, there is no reason to avoid Moscow altogether but you should refrain from any public displays of affection.

While you walk around Moscow, you might encounter police officials that may demand to see your papers to check if you have been registered within 7 business days of your arrival into Moscow.

You shouldn’t have any problems with this, because if you stay in a hotel then you are automatically registered and will be handed a confirmation paper.

How Does Moscow Compare?