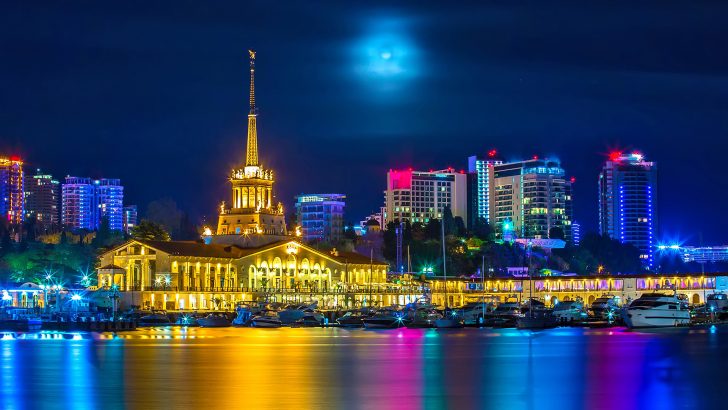 Sochi is located in the south of Russia and is the second-largest city of Krasnodar Krai.

It has an exit onto the Black Sea coast, and you can arrive by traveling around 600km south of Moscow.

Given that it exits the Black Sea, Sochi is known and often called the ‘Summer Capital’ of Russia or the Black Sea Pearl.

This is because this city is Russia’s most popular and busiest summer resort.

Yes, you heard it correctly, a summer resort in cold Russia!

And tourism works great here, too, attracting more than four million visitors annually: as it has to offer fantastic mountainous views, great beaches, and vibrant nightlife.

It’s so successful that Russian celebrities love to spend their holidays here, too.

The most famous international visitor of Sochi was Bono, who was invited to spend some time at President Medvedev’s residence back in 2010.

As a popular summer tourist destination, Sochi is safe as much as other cities in Europe. However, if you’re planning on traveling to Sochi, keep in mind that you should always keep your guard up and remain aware of your surroundings, just in case.

Generally speaking, transportation in Sochi is safe, but you should remain vigilant on public transport, especially in the buses called “Marshrutka”. Keep in mind that the most dangerous areas where small crime tends to occur are the underground walkways, called “perekhods”. Only use official services like Yandex Taxi, Uber or Gett taxi.

Pickpocketing is common in Sochi, especially around resorts and beaches. Pay attention to your belongings, don’t leave them in plain sight and be especially careful in crowded places like stations or near tourist attractions.

Sochi isn’t particularly susceptible to natural disasters. Though Russia is famous for blizzards and snowstorms, this isn't the case in Sochi.

The situation is pretty good when it comes to kidnappings and muggings in Sochi. Generally, never accept free drinks or food when you’re in a club or a bar. Drink spiking and then attacking and robbing the victim have been reported on numerous occasions.

After the recent terrorist attack in the subway in St. Petersburg the probability of this situation happening again anywhere in Russia is rather high.

There are many scams in Sochi, usually performed by children trying to distract you and then steal some money from you. Never talk to strange kids on the street. Also, you should avoid playing street gambling games.

Women are generally safe in Sochi, though you should avoid finding yourself alone in clubs or bars, and of course, apply all normal precaution measures like avoiding remote and poorly lit streets and areas.

So... How Safe Is Sochi Really?

You’ll be pretty safe in Sochi, don’t worry, because Krasnodar Krai is probably one of Southern Russia’s most safe regions.

Sochi has never had higher crime rates, and that’s still true today, though it does pay to be a little extra cautious.

What you should bear in mind, following the Russian saying “Nights are dark in Sochi”, is that during nights it is fairly easy to get lost in this city.

This is why you should try and avoid poorly lit areas and dark spaces.

Also, petty crime might be your biggest concern here, when it comes to crime.

Beware of pickpockets in crowded places, such as markets and transport terminals, as well as beggars at stations and beaches.

When it comes to authority officials, you should keep in mind that they usually don’t speak English, so don’t expect any English by them outside of the major cities.

Bear in mind that if you are a member of the LGBT community, there is no reason to avoid Sochi altogether but you should refrain from any public displays of affection.

How Does Sochi Compare?