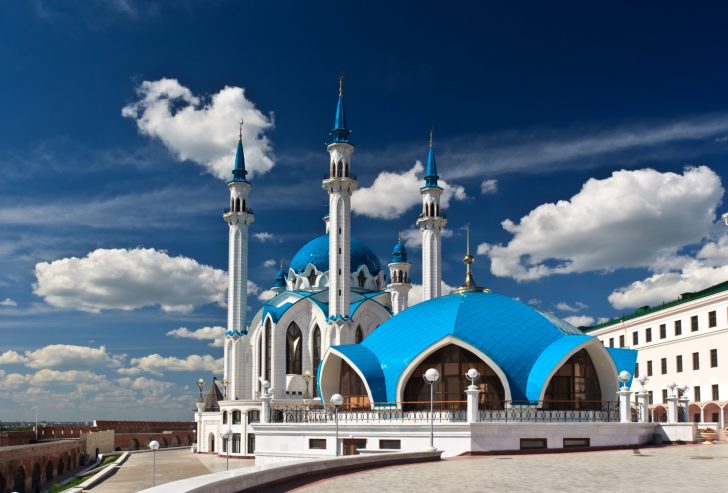 Kazan, the most multinational city in Russia, is the capital of Russia’s republic of Tatarstan and the center of the world Tatar culture.

There are more than 115 nationalities in Kazan.

In the recent past, Kazan has earned the reputation of a sports city.

Its recent investments in this domain include hosting of numerous sports events, such as the 2013 Summer Universiade, the 2015 World Aquatics Championship, the FIFA Confederation Cup 2017 and the FIFA World Cup 2018.

These sports events cause a huge influx of tourists, in fact, annually, more than 2 million tourists visit Kazan.

But that’s not all tourists get to see in this amazing Russian city.

It offers a rich history, deep culture, and strong economic influence, and to top it all off, Kazan has one of the highest standards of living in Russia, making the visitors feel safe and sound.

Generally speaking, Kazan today is safe as much as other cities in Europe, despite its problematic history with criminal activity in the 90s. Kazan is now as safe, if not safer, than the main capitals of Europe.

Generally speaking, transportation in Kazan is safe, but you should bear in mind that kidnappings have been known to happen, mostly in unlicensed taxis, so be careful when hailing one on the streets. Keep in mind that the most dangerous areas where small crime tends to occur are the underground walkways, called “perekhods”. Only use official services like Yandex Taxi, Uber or Gett taxi.

Pickpocketing is common in Kazan, and surprisingly it is mostly performed by groups of children. Pay attention to your belongings, don’t leave them in plain sight and be especially careful in crowded places like stations or near tourist attractions.

Russia isn’t particularly susceptible to natural disasters. Some blizzards are possible during winter which can cause affect the traffic and delay your flights. Also, in areas near Mongolia and Kazakhstan, earthquakes can happen sporadically.

There's no risk of getting mugged or kidnapped in Kazan. Generally, though, never accept free drinks or food when you’re in a club or a bar. Drink spiking and then attacking and robbing the victim have been reported on numerous occasions.

Kazan hasn't been recently targeted by any terrorist groups. Still, it's best to remain vigilant at all times and aware of your surroundings, since terrorist attacks should never be completely ruled out.

There aren't many scammers active in Kazan. As for scams on the streets, you should avoid playing street gambling games. Double-check your change and agree on everything in advance.

Women are generally safe in Kazan, though you should avoid finding yourself alone in clubs or bars, and of course, apply all normal precaution measures like avoiding remote and poorly lit streets and areas.

So... How Safe Is Kazan Really?

Since the ’70s, Kazan has carried the reputation of one of Russia’s least safe cities.

There’s even a concept known as the “Kazan phenomenon” concerning gangs on the streets of this city, and this concept, in time, grew into a journalistic and sociological concept.

However, since the late ’90s, tables started to turn, and the situation changed completely, turning Kazan into one of the most tourist welcoming cities, where people feel welcome and safe.

Kazan has become a host city for a lot of large international events which changed its old reputation and caused a modernization of police, which lead to crime rates decreasing significantly.

The officials on the streets of Kazan are decent in doing their job and uncorrupted: don’t ever try to bribe them: you will be charged with bribery.

Bear in mind that if you are a member of the LGBT community, there is no reason to avoid Kazan altogether but you should refrain from any public displays of affection.

How Does Kazan Compare?