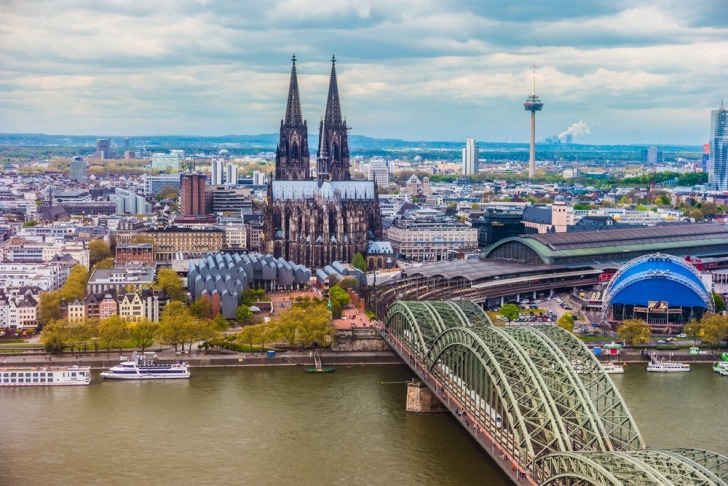 Cologne is situated on the river Rhine and the fourth largest city in Germany with more than 1.000.000 inhabitants.

It is one of the nation’s media, tourism, and business hot spots.

Cologne is known to be one of the most liberal cities in Germany.

The city has interesting sightseeing such as Cologne Cathedral/ Cologne Dom – is a masterpiece of High Gothic architecture, and a UNESCO World Heritage Site.

Also, Cologne has one of the world’s best collections of museums and galleries for a city of its size.

Travelers come here to visit Cologne Carnival – the biggest festivity in the city is the Winter streets carnival in February.

In general, the city is quite safe, you should avoid some areas at night and watch your pockets in crowded places.

Public transportation and taxis are safe. Use common sense and watch your pockets.

There are many pickpockets in Cologne, especially in tourist places, at festivals and in public transport. Be careful.

The main hazard in Cologne comes from a river spill. This occurs in spring when the snow melts in the mountains and leads to flooding.

Regarding mugging and kidnapping risks, Cologne is a safe place. Just be watchful and avoid dangerous areas.

Terrorism not an issue in Cologne but it's an issue in Europe. Every time you are in a touristic place or at the festival - be watchful.

Fraud can occur on the streets when someone tries to distract or talk to you. Sometimes it can even be beggars. Don't do stop to talk with strangers.

Women can safely travel to Cologne alone. Just use common sense and you won’t get into trouble.

So... How Safe Is Cologne Really?

Cologne calm European city, but has a moderate level of crime and it increases in recent years.

Travelers should be especially careful around the train station and near the Cologne Dom – most touristic place.

There are a lot of pickpockets here.

In Cologne, you should avoid get drunk at night clubs and do not participate in street fights.

The outskirts of the city and the square near the station, especially at night, also remain non-safe places.

Try to avoid these places.

Violent crime is rare in Cologne.

But, like any big city, theft is a problem here.

Keep your valuables close while traveling in public transport.

Passport and jewelry better keep in the hotel’s safe. Do not leave wallets or bags unattended.

After the winter, due to the melting snow in the mountains, the Rhine carries much more water than usual.

Sometimes this leads to severe flooding.

Explore this information before your visit to Cologne.

Avoid being in the Altstadt area at night, it’s good in the daytime, but at night it considers to be a dangerous place.

Change your money at the banks or use ATM at banks to avoid scams.

How Does Cologne Compare?