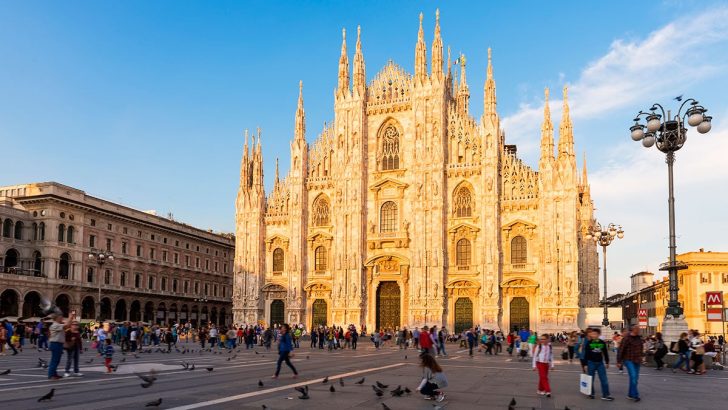 Milan is the most important city in Italy and the second-most populous city in the country.

It is one of the most ancient cities in Europe with more than 26 centuries of history and heritage.

Unfortunately, it has been partly destroyed during the Second World War and the city has rebuilt itself into a business capital.

Tourists are attracted to Milan because it is a perfect destination for shopping, football, opera, and nightlife.

Milan is famous for the Duomo, one of the biggest and grandest Gothic cathedrals in the world, La Scala, one of the best-established opera houses and the UNESCO’s World Heritage Site Santa Maria alle Grazie Basilica, containing Leonardo da Vinci’s The Last Supper.

Milan is a very safe city, although some areas attract a lot of pickpockets. There are neighborhoods outside the city that are best to be avoided. Some scams are possible at the center of the Duomo where people will ask you for some money. Besides a large police presence in the area, some pickpockets still operate, as well as bag-snatchers.

Tourist needs to be aware of the fake taxis and uses only the licensed ones, which have a taxi sign on the roof. Make sure the meter in the taxi has been turned on and reset. Buses are comfortable, punctual and clean, so they can be a good option to travel around the city. Pedestrians should take care of Zebra crossings because vehicles do not always stop, even though they are required to.

Milan is very prone to pickpockets. There are even maps with the most frequent pickpocket’s locations. The city center is the place where thieves use a variety of methods to distract you and rob you. Take care on public transport and in crowded areas since the risk exists. However, the vigilant person will not encounter any problems.

When the natural hazards are in question, Italy is prone to some minor tremors and earthquakes. But they are not very frequent and do not represent a serious threat.

Milan is a safe place where mugging almost does not exist. There are sometimes robberies of cars, so always lock your vehicle and never leave valuables on show. There were no reports of kidnapping, especially not the kidnapping of foreigners.

Since terrorists are likely to try to carry out attacks in major cities in Europe, Milan might be the target. Terrorists are motivated by the conflict in Iraq and Syria and the place where they might attack cannot be predicted. You should be vigilant and avoid gatherings and demonstrations.

There are a lot of scammers in Milan, and they will do their best to fool a distracted tourist, to take the money from them. They are located around major landmarks in Milan. Their aim is only to take your valuables, passport or money, so do not show off with the latest gadgets and expensive jewelry. Around Galleria Vittorio Emanuele II, you may be approached by women who would ask you for petition signatures for an "anti-drug, anti-AIDS for youth" organization. Do not start a conversation with them.

Milan is safe for women travelers since they do not encounter any kind of trouble here. Female travelers have not had issues in Milan.

So... How Safe Is Milan Really?

Even though there are certain areas near Loreto, Central station, and Porto di Mare which can be unsafe in the night, Milan is a rather safe city.

It is full of grand palaces and fine churches in the center, a lot of parks and museums.

To remain safe, travelers should not seek help from people who are offering to help because they will ask for money in return.

The best thing is to ignore them.

Be careful when crossing the street, because the pedestrian crossings are not respected, except when a red light for the vehicle is on.

Most of the visits are trouble-free, so do not allow thieves and scammers to destroy your journey.

As long as you are watchful and vigilant, you will not encounter any problems in Milan.

How Does Milan Compare?