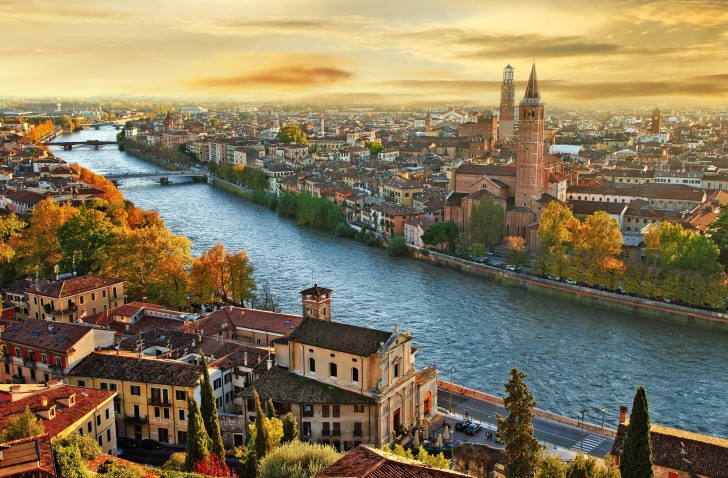 Verona is a city located in north-eastern Italy’s Veneto region.

Verona is a majestic cultural Italian gem, astonishingly full of art and history.

Its architecture is unbelievably beautiful and if you’re a hedonist Verona can easily satisfy your needs with loads of wineries, excellent restaurants, breathtaking panoramic views.

Also living in Verona gets you easy access to the Lake Garda area, to the mountains and the sea – near Venice.

It might feel a bit provincial if you come from a big city.

But then, there are plenty of places to escape to nearby if that’s the case.

The only possible risk in Verona is the pickpocket risk as in any other city frequented by tourists. However, the overall risk is low and there are almost no reports of serious criminal acts.

In Verona, you need to have cash with you as some taxis won't accept cards. Taxis in Verona are relatively expensive and it might be dangerous to hail them late at night. Only use officially licensed taxis with a taxi sign on the roof and make sure the meter in the taxi is turned on.

Pickpocket risk in Verona is very high and petty crime like bag-snatching in the city center and public transport is common. Use a hotel safe where possible and do not take too much money with you.

Some of the worst natural disasters that could strike Verona are earthquakes, though it is somewhat improbable they will.

Verona is relatively safe when it comes to mugging and kidnapping, and such cases rarely happen, even more so to tourists, but do pay attention to your surroundings.

Scam risk exists in Verona and even though it is of medium level, you should pay attention to all the usual tricks, fake petitions and strangely looking people trying to help you.

So... How Safe Is Verona Really?

Just like most popular cities in Italy, Verona is generally safe especially the Centro Storico (town center) where you can find the vast majority of tourists.

Verona is also considered a way safer than other touristic cities such as Milan, Rome, and Naples.

The crime rate is quite low and you can walk around town at night without the fear of being robbed or assaulted.

A similar thing happens with beggars – they work in organizations and because of that begging is pretty common in Verona, like in every Italian major city, but tourists are unlikely to experience aggressive beggars.

Of course, caution should be used as some neighborhoods may be a little more eventful than others but generally speaking, Verona is definitely safe.

How Does Verona Compare?