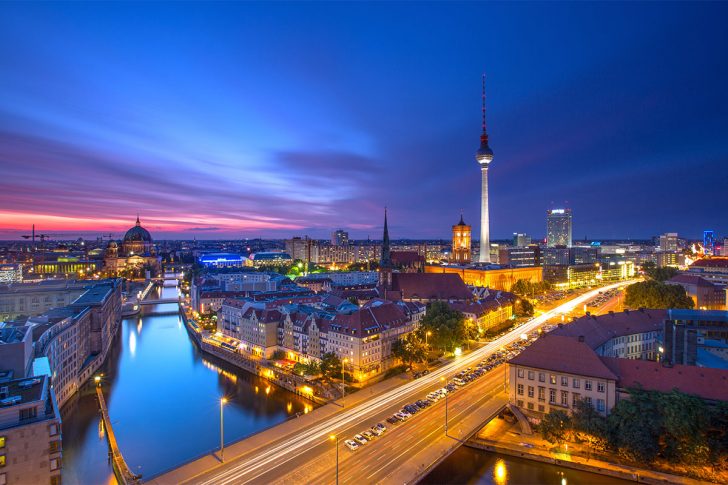 Berlin is the capital, the largest and the most populous city in Germany, with more than 4 million citizens.

Due to its history and culture, it is a center of marvelous architecture, interesting museums, and galleries, gorgeous palaces, as well as a vibrant nightlife with numerous cafés, clubs, bars.

If you are interested in history and education, the best part of the city is Mitte, which is full of must-see landmarks such as the Brandenburg Tor, the MuseumInsel, Alexanderplatz, and the TV tower.

On the other hand, for those who search for some shopping, the neighborhoods of Charlottenburg, Schoneberg, Wilmersdorf, Tiergarten and Moabit are the best solution.

Considering its location score of 78, Berlin can be seen as a very safe city, both at night and in the daytime. As in any other major city, there are some areas where you can encounter criminal activity. As long as you are cautioned, you can feel safe while in Berlin.

When public transport and taxis are in question, Berlin can be considered generally safe. However, there is always a possibility of becoming easy prey if you are not attentive, so you should remain vigilant. Taxi scams do not exist in Berlin.

Pickpockets are the main problem not only in the public transportation and tourist areas but also in clubs or pubs, just as in any other capital. Their techniques and strategies are so sophisticated and not only tourists are the target, but the Berliners as well. You should keep an eye on your possessions.

There is no threat of a serious natural disaster in Berlin. The only possible disaster is flooding which can happen in the spring due to the snow melting or heavy rain.

Mugging and kidnapping are rare in Berlin, and there are very few reports on tourists being assaulted. In case it happens, it is usually against locals. Dangerous zones should be avoided.

Due to the recent history, which reports terrorist attacks in Berlin on Christmas Market, there is a possibility of further terrorist attacks. The main targets can be events with a lot of people or crowded streets. Even though tourists are not the direct target, in case of the attack, they can become victims.

Scammers exist, and tourists are their main target. They will try to distract your attention and take your valuables. The best advice is not to accept the offer to help with your luggage.

Berlin is one of the most accessible destinations for solo travelers and women do not need to worry while in Berlin. Any possible problems against females can happen in those areas of the city that tourists never go to.

So... How Safe Is Berlin Really?

Berlin is a city that is extremely attractive to tourists, and that is why the authorities are doing their best to make it a perfect tourist destination where safety would not be questionable.

Berlin police are not corrupted and it is investigating crimes, even in plain clothes, to prevent and stop it.

Berlin is generally not dangerous in terms of serious criminal acts, but some bordering neighborhoods have increased the risk of violence and robberies and should be avoided by tourists, especially at night.

Petty crimes, like pickpocketing and purse snatching, are common in the Kurfürstendamm area and the KaDeWE department store, so tourists should remain attentive while visiting these areas.

Even though there are crooks who take advantage of the crowds on the city’s streets and thieves that may try to rob you, traveling gives you the freedom to discover the city you want to explore and you should put Berlin on your agenda.

How Does Berlin Compare?