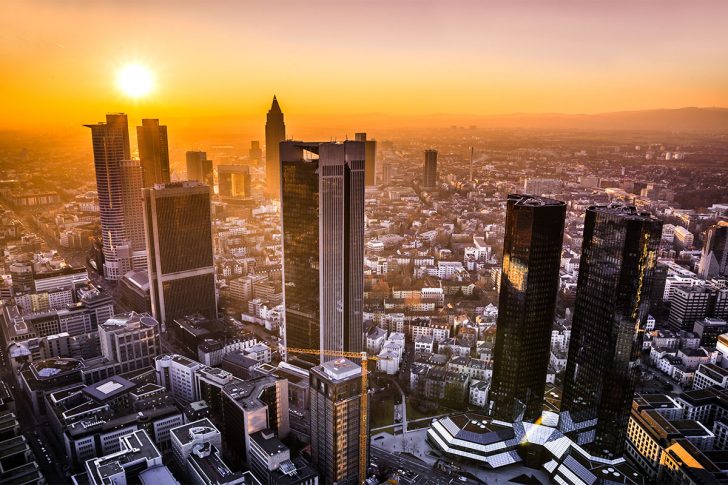 Because it is the business and financial center of Germany and one of the largest cities, it is also the city with the busiest German airport.

Frankfurt is home to the European Central Bank and the German Stock Exchange located on the river Main.

There are some of the highest skyscrapers of Europe and the city center, as well as the museums at the River Main to attract millions of tourists every year.

Some of the must-see historical buildings are Römerberg, Dom, the main Gothic-style cathedral and Eiserner Steg.

When the safety index is taken into consideration, Frankfurt is an overall safe city, as well as a whole of Germany. However, in comparison to other cities in Germany, the city is dangerous. Violent crime is not very common, but tourists should be particularly vigilant on the streets, stations and crowded public places at night.

Since many travelers come here for business, there are numerous taxi drivers in Frankfurt. Even though the risk of being overcharged or toured around the city is very low, there might be some taxi drivers that will try to take advantage of if they notice that you are not familiar with the city. Avoid driving here, and if you do, pay attention to where you park your car.

Pickpockets are operating in crowded places in Frankfurt. Even though the risk of being robbed is not very high, tourists should do their best to prevent thieves from stealing their possessions. The central station area has many homeless people, beggars, and drug users, who might bother tourists, so try to avoid them.

The risk of natural disasters is low because Germany has a great location when natural hazards are in question.

There are very few chances of being mugged or kidnapped in Frankfurt, but still, it is better to avoid dangerous zones. Vigilance is always advised.

Although Frankfurt was not the target of the terrorist’s attacks, the possibility of the attack exists and the German government practice increased security especially on major events and public gatherings. UK and British nationals can become victims since groups and individuals are motivated by the conflict in Iraq and Syria and may attack them.

Although the scam risk is low in Frankfurt, do not accept help from people who try to distract you by offering help. Be aware of fake police officers who want to check your money, because a real officer will never do that.

Female travelers can feel very safe while in Frankfurt and traveling solo on German trains is also not considered risky as in other major cities.

So... How Safe Is Frankfurt Really?

Frankfurt is the center of culture, history, banking and business in Europe.

It’s a modern city and it becomes a well-visited tourist destination nowadays.

Being the host of numerous festivals, it offers the tourist a chance to enjoy river activities or relax in parks, restaurants, and cafés.

However, a great amount of tourists is usually followed by criminals.

The good thing is that violent crime is not frequent in Frankfurt and there is almost no possibility of being a victim of armed robbery or some other serious assault.

Germany is not a dangerous country, but Frankfurt is one of the less safe cities here.

Tourists need to pay attention to some petty criminal acts around the stations, where many drug dealers can be found, and avoid drunken, strange-looking or aggressive people, particularly at night.

They need to be watchful in the center of Frankfurt especially in the Romer area where pickpockets operate mostly.

Regardless of the fact that Frankfurt has the highest levels of crime in Germany which proves its nickname the German “crime capital”, it is still less dangerous than many other metropolitan cities worldwide, and tourists who want to visit it should not hesitate, because they can feel safe here, as long as they practice common sense and remain vigilant.

How Does Frankfurt Compare?