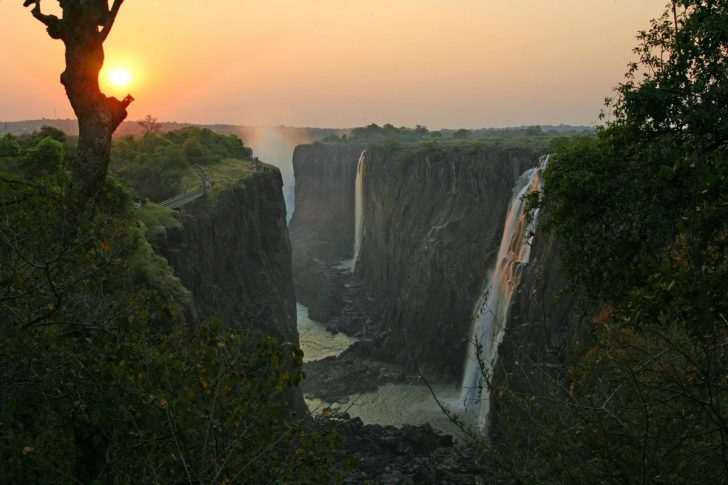 Zambia is a landlocked country in Southern Africa that shares its borders with Tanzania to the northeast, Malawi to the east, Mozambique to the southeast, Zimbabwe and Botswana to the south, a narrow strip of Namibia, often referred to as the Caprivi Strip to the southwest, Angola to the west, and the Democratic Republic of the Congo to the northwest.

Now, what makes Zambia such an appealing destination for tourists is the fact that some of the world’s best safari opportunities are concentrated here, and it also offers a glimpse of Victoria Falls, which is one of the World’s Seven Natural Wonders and a UNESCO World Heritage Site.

Zambia is slowly developing into a very desired tourist destination, a must-visit if you’re at all into safari.

The people of Zambia call their country “the real Africa” and everyone who has visited other South African reserves before going to Zambia can attest to that.

If you want to enjoy a proper safari, this is the way to go.

No fences between the popular national parks and reserves, no cars crowding around them, no hordes of tourists scaring animals away.

It really is a true African experience.

Zambia is, for the most part, a safe country to visit. However, it does have a rather high crime rate, though it's mainly ridden with a petty street crime because the population is desperately poor. You should be vigilant and take all possible precaution measures in order to minimize the risk of getting stolen from.

Transport is generally safe in Zambia, You can travel everywhere by bus (though you should remain vigilant for pickpockets) and taxis. Make sure the taxi drivers don't rip you off. If you opt for driving yourself it is a good idea to carry some spares and tools with you. Two spare wheels and a couple of spare tubes are necessary due to the condition of the roads.

Floods are the biggest natural threats in Zambia. Flood disasters in Zambia are often caused by river flooding from heavy or severe rainfall. Sometimes they originate from hailstorms that cause immense damage to the crops and buildings along the way.

Muggings are not a major threat in Zambia, though they do happen. Always get a taxi to and from bars at night, never walk the streets after dark and generally avoid poorly lit areas which are common in Zambia. African cities, in general, are not safe for tourists at night.

There haven't been any terrorist attacks recently in Zambia, but they shouldn't be ruled out. There is a risk of explosives that are remnants of war in areas near the borders with Angola, Mozambique and the Democratic Republic of Congo.

You should avoid changing money with groups of men on the streets as they are likely to scam you. Always aim for the official banks when it comes to handling money. Other scams involve tourists being frequently requested to pay bogus "fees" to be paid to various Zambian officials and groups. Always insist on a receipt from the Government of Zambia for any fines and duties paid.

Zambia is relatively safe for solo women travelers but not at night. Avoid going anywhere after dark. Use your common sense and be aware of your surroundings at all times. Avoid wearing purses and do not walk alone or ride in taxis at night.

So... How Safe Is Zambia Really?

It is one of the few African safe countries where crime levels are similar to those in a European country.

However, this doesn’t mean you should relax: this country is filled with genuinely and desperately poor people and because of this, you should be aware of your surroundings at all times.

Zambians are, in general, very friendly people, but you should still avoid walking at night, especially in the unknown or poorly lit areas, which are common in Zambia, since its streets are covered with only a small number of street lights.

It is not recommended to drink at night or move in areas where you might encounter intoxicated people.

Women aren’t recommended to go to bars alone or be on the streets after dark.

Bear in mind that corruption is very widespread throughout Zambia, though this has improved under the new president Edgar Lungu.

However, don’t expect the police to be on your side and help you.

If you need their help, you might have to pay.

During this season, the Batoka Gorge section of the river becomes unpredictable and there have been cases of fatal accidents.

How Does Zambia Compare?