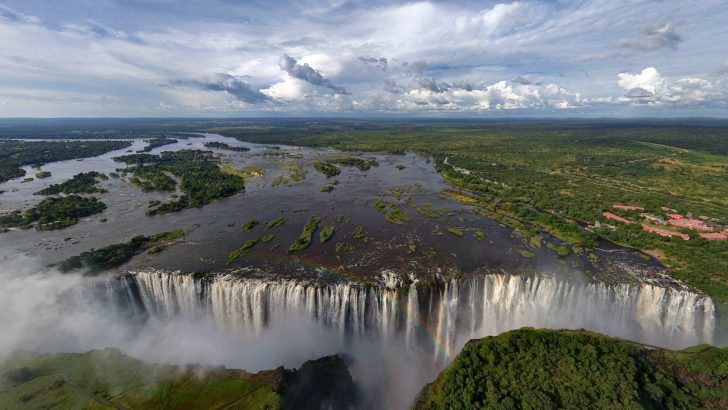 Zimbabwe is a landlocked country located Southern Africa, sharing its borders with South Africa to the south, Botswana to the Southwest, Zambia to the Northwest, and Mozambique to the east and north.

What is truly stunning about this country, making it a top tourist destination is the fact that the Zambezi river forms the natural boundary with Zambia and when in full flood (which usually takes place from February to April) the massive Victoria Falls forms the world’s most impressive water curtain.

The Victoria Falls are a major tourist attraction and one of the greatest natural wonders in the entire world, which makes Zimbabwe a country where tourism flourishes.

Apart from the great Victoria Falls, there are other tourist highlights in this country, and it is truly a destination of many wonders.

There are the ruins of Great Zimbabwe, the gorgeous Lake Kariba, and two major cities: Harare and Bulawayo.

Move further to the east and you will find the so-called Eastern Highlands, a country ideal for smaller pleasures like fine walking and fishing.

It is actually sometimes so breezy that during certain parts of the year, the grass in the morning is trimmed with frost.

Move away and go to the west, and you will find the Matopos National Park, known for the famous jumble of granite rocks.

Zimbabwe is, for the most part, a safe country to visit. However, it does have an extremely high rate of both petty and violent crime, though it's mainly ridden with petty street crime. You should be vigilant and take all possible precaution measures in order to minimize the risk of getting stolen from.

Means of transportation in Zimbabwe are limited and not very reliable. Driving in Zimbabwe is not recommended since the driving conditions are really bad and the country is filled with irresponsible drivers. Taxis are available, but be wary as drivers might jack up prices for tourists. Always negotiate the price before your ride.

As for natural disasters, the greatest risks in Zimbabwe are the floods that are known to kill people and leave large numbers of homeless people, causing irreparable damage.

Violent crime is also a common occurrence in Zimbabwe and you have to be very careful. If you are visiting Nyanga, you should avoid Pungwe Falls, Mterazi Falls, and the Honde Falls, as there have been many instances of armed robbery, theft, all kinds of assaults, and attempted rapes reported at these sites.

There haven't been any recent terrorist attacks in Zimbabwe's recent history, but they shouldn't be ruled out. Be aware of your surroundings at all times.

Scams are an everyday occurrence in this country. There are a number of scams performed on tourists, and the locals use every situation to try and get money from you. Double-check everything, and negotiate everything in advance. Be careful when taking a taxi and make sure they use the meter or negotiate the ride before getting into the cab.

Zimbabwe isn't the safest place for a woman to be visiting alone. If you do, be sure to avoid remote streets, both during day and night, and do not flash your belongings or handle money in public. Stay out of the streets at night and be vigilant for any possible dangers at all times.

So... How Safe Is Zimbabwe Really?

Zimbabwe is a somewhat safe country to visit.

Currently and during the past couple of decades it has hit a rough patch and its troubles aren’t over.

Due to bad economic conditions and the fragile government, many have turned to crime so petty theft is very common as is a violent crime, such as muggings, bag snatching, and carjacking, especially in urban centers and tourist areas.

You are advised to always move in groups, preferably with an organized tour group.

Avoid being on the streets at night – you may become targeted by criminals.

Another issue to watch out for is bad traveling conditions.

Many crimes happen precisely on the roads.

Theft from vehicles is common and you are recommended to drive with your windows up and your doors locked.

Also, when driving, do it without flashy valuables as criminals are known to target cars that stop at intersections.

Tire slashing is also a common occurrence as are accidents due to irresponsible driving and many local reckless drivers.

At night, they usually avoid stopping at red lights and then just proceed after checking the road is clear.

How Does Zimbabwe Compare?