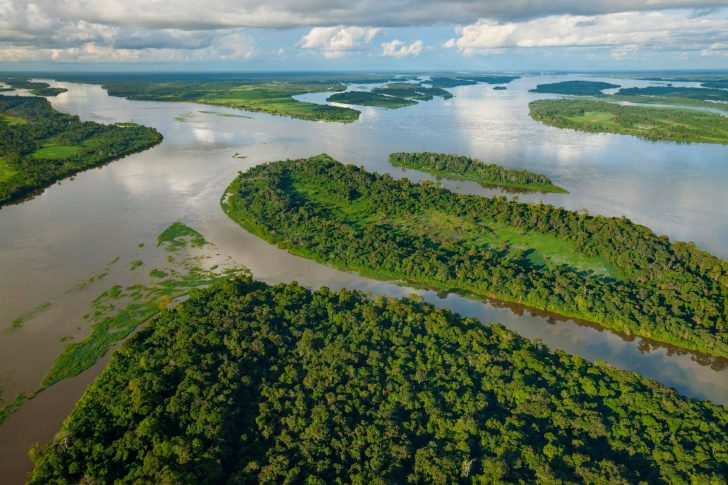 The Republic of Congo shares its borders with Gabon, Cameroon, the Central African Republic, the Democratic Republic of the Congo and Angola (the exclave of Cabinda).

What is interesting about this country is that its sparse population is mostly concentrated in the southwestern part of the country, while the entirety of about 80% of the country is actually a vast tropical jungle that is completely uninhabited.

Bearing this in mind, Congo is actually one of the most urbanized countries in Africa, given the fact that about 85% of its total population lives in Brazzaville, it’s capital and largest city, Pointe-Noire, or one of the small cities along the railway connecting these two cities.

Since there is about 80% of the entire country that is covered in nothing by nature, namely the dense Congo Rainforest, many tourists rush here to enjoy touring the river and rapids somewhere between the picturesque riverside villages, restaurants, hotels and the country’s capital Brazzaville.

Tourist agencies take tourists to explore the breathtaking nature of the Republic of the Congo in arranged motorized and traditional boats and this experience is as unique as it is mesmerizing.

Warnings & Dangers in Republic of the Congo

The Republic of the Congo is, for the most part, a safe country to visit, though it's not without its dangers. You should be vigilant and take all possible precaution measures in order to minimize the risk of getting stolen from.

Transportation roads within the capital are relatively stable and the public transport is, overall, safe, though remain vigilant for pickpockets. The rainy season that lasts from September to December and from February to May makes any non-primary roads outside of the capital basically unusable.

There is a threat of petty crime. Pickpockets are an everyday occurrence, especially on the beaches, so you should be extremely careful when handling your valuables and never carry your money in a purse or a pocket. Never carry all your money in the same place, and be aware of your surroundings at all times.

There are some natural threats in the Republic of the Congo, such as volcanic eruptions, earthquakes, flooding, and droughts. There is also extreme weather and climate variability due to rainy seasons that last from September to December and from February to May.

Violent crime is not that common in the Republic of Congo, but you should still remain vigilant at all times. If you stay alert and tend to remain unnoticeable with your dress code and mannerisms, you should be just fine.

There haven't been any recent terrorist attacks in the Republic of Congo's recent history, but they shouldn't be ruled out. Be aware of your surroundings at all times.

As in most countries, scams are very likely for tourists visiting. You should double-check every change, and negotiate everything in advance. Beware of people posing as officials and trying to extort money from you, and always ask for a badge, though it's not that common. Never accept drinks from strange people.

You should bear in mind that women traveling alone might experience greater verbal harassment. If you are a female visiting the Republic of Congo alone, be sure to avoid remote streets, both during day and night, and do not flash your belongings or handle money in public. Stay out of the streets at night and be vigilant for any possible dangers at all times.

So... How Safe Is Republic of the Congo Really?

The Republic of Congo is safe to visit.

It is a developing country in Africa and it’s actually one of the safest on this continent.

Petty crime targeting foreigners isn’t that common, though it happens and you should keep in mind that the beaches are where petty crime is often committed.

Tourists are recommended to not carry their valuables when visiting the beaches.

The Embassy of the Republic of Congo even recommends avoiding all beaches completely at night, since this is a popular pickpockets’ destination and evenings are perfect for such crimes.

When it comes to Brazzaville, crime is common on its streets, and many tourists have been targeted, though the situation is still not as dangerous as in many other African countries.

Tourists may become targets depending on the way they dress, behave or speak.

There have even been reports of violent crime in Brazzaville.

Bear in mind that women travelers in this country may experience unwanted attention or even verbal harassment.

They are also greater targets for petty theft since they are perceived as not being able to defend themselves.

How Does Republic of the Congo Compare?

1 Review on Republic of the Congo