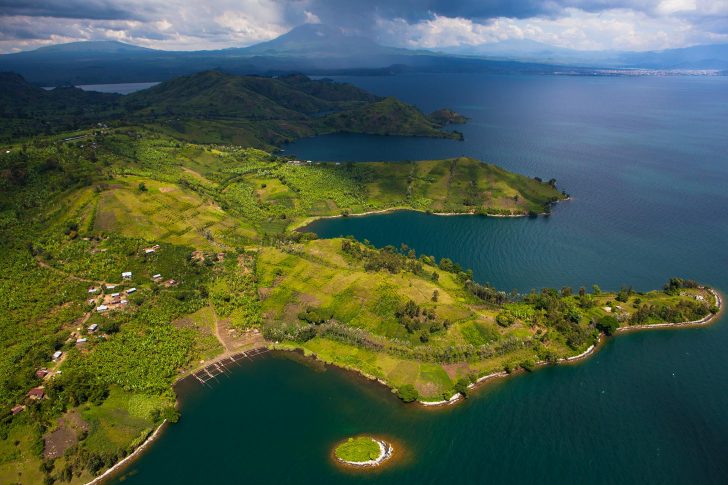 The Democratic Republic of the Congo often referred to as its abbreviation – DRC or D.R. Congo is the single largest and most populous country in Central Africa.

This country has suffered tragic times and has had an extremely tumultuous history.

The presence of armed troupes makes it dangerous for tourists to visit DRC currently.

However, those who manage to enter DRC and are brave enough to spend some time here, are definitely in for an adventure.

Geographically, DRC is diverse and can offer many options for all nature lovers: in the east, you can see volcanic peaks rising above the rainforests surrounding them, with misty clouds descending upon them.

Mount Nyiragongo is especially interesting for hikers who can spend the night on the rim above an active lava lake.

If you’re into jungles, tourists are permitted to trek to families of gorillas daily, but in smaller groups.

You can also spend some quality time on the mighty Congo River, floating hundreds of kilometers on barges and roaming around the lively markets in every corner of the country.

Warnings & Dangers in Democratic Republic of the Congo

DRC isn't a safe destination for travelers. You should know that many governments advise their citizens not to travel to the country as it is considered very high risk. Be very aware of your surroundings at all times. Both petty and violent crimes are normal here.

Be extremely careful when traveling anywhere in DRC. Transport here is risky and tourists should be cautious at all times. There have been many incidents of highway robberies and carjacking by armed bandits outside urban areas, often resulting in violence.

As you would expect, petty theft and pickpocketing is widespread in DRC. Make sure you don't flash your valuables and generally don't look like you're wealthy. Dangling cameras, flashing money or credit cards or expensive jewelry is strongly recommended against. Be particularly careful in crowded areas. Bear in mind that crime in this country is a way of life.

The DRC is susceptible to numerous natural hazards such as volcanic and limnic eruptions, earthquakes, flooding, and drought. What heightens the susceptability to these hazards are factors like extreme poverty and political turmoil.

Violent crime happens in DRC during all times of day, so do not think that daylight makes you safe. You can expect muggings, burglaries, carjackings and armed banditry on the roads. These occurrences are common and the risk increases after dark, so avoid going anywhere after nightfall.

Terrorists are likely to carry out attacks in DRC. The presence of armed forces in some parts of DRC makes the situation in the country extremely tense. Attacks can't be ruled out, so be extremely vigilant at all times.

There are many scams in DRC, like in most poor and dangerous countries. Be wary of people trying to distract you in order to steal from you and of taxi drivers overcharging you for a ride. We advise you to be extremely careful when handling money and around ATMs.

DRC is definitely not safe for solo female travelers. They are advised, if it is absolutely necessary that they leave their accommodation at night, to go out accompanied by someone. Be sure to avoid remote streets, both during day and night, and do not flash your belongings or handle money in public.

So... How Safe Is Democratic Republic of the Congo Really?

The Democratic Republic of the Congo is dangerous for travelers, and traveling here is strongly advised against due to the potential for large scale demonstrations and civil unrest.

The presence of armed forces in North and South Kivu, Orientale provinces northern and central regions of the Katanga province, and the eastern section of Maniema, makes the atmosphere in the country particularly tense as these groups have been known to perform all kinds of crimes like stealing cars, taking hostages, assaulting people and sexually assaulting women, murdering and kidnapping civilians.

The LRA (The Lord Resistance Army) rebel group continues to wander the jungles near the border with the CAR/South Sudan/Uganda, in the northeastern part of the country.

There are some parts of the country that are close to the Ugandan border and yet still safe to visit, but even so, it’s still not recommended to travel anywhere north and east of Kisangani & Bumba is dangerous.

The traffic conditions in DRC are extremely poor: the road network is in dire need of improvement, as traveling along these roads can take weeks, especially during the wetter seasons.

How Does Democratic Republic of the Congo Compare?

7 Reviews on Democratic Republic of the Congo