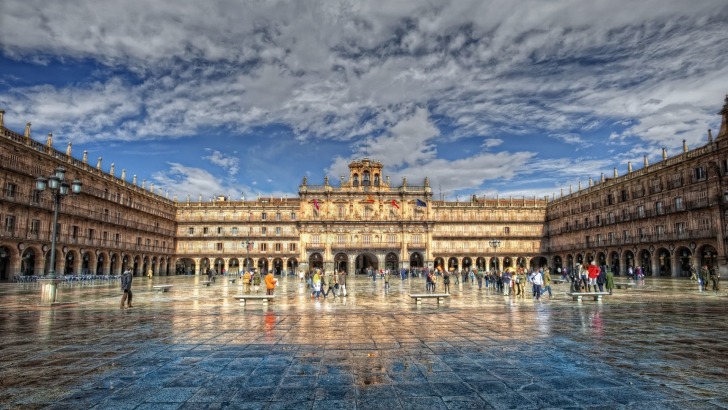 Salamanca is the capital of Salamanca province, situated in western-central Spain

Salamanca truly is one of the most beautiful cities in Spain.

You can breathe culture and history everywhere.

However, nowadays there is too much party: bars are full every night of the week (more rarely so during the period of exams), they are plenty and they constantly try to out-market the others.

However, Salamanca is worldwide known by its university so if you do come here, follow the ethical rules and enjoy the city and its people.

It’s a very cheap place and most of the interesting aspects of it are concentrated in its very center.

Salamanca is overall safe to travel to, with somewhat low crime rates where pickpockets are the biggest issue. However, it is advised that you remain vigilant at all times, especially when crossing the streets.

Transportation in Salamanca is very safe and reliable, even though taxi drivers might try to overcharge their services or demand a tip. Also, be careful on public transport, as it's the place where pickpockets operate.

Pickpocketing exists in Salamanca and you should remain vigilant and make sure not to flash your belongings in crowded places such as bus or train stations, or public transport. Be careful and keep your valuables close by your side.

There are no known natural disasters in Salamanca, and in Spain altogether, so you can relax when it comes to nature while you're here.

It is not likely you will get mugged or kidnapped in Salamanca. Crime rates are generally not too high and violent crime against tourists is unlikely. Still, don't let your guard down and stay away from dark and deserted areas of bigger cities.

There is the issue of scams in Salamanca, just like in any other country, and the most common ones are credit card and ATM scams. Be careful when picking up your many from ATMs. Always negotiate everything in advance, double check your change and never pay anything upfront. Never accept drinks from strange people or leave your drink unattended.

So... How Safe Is Salamanca Really?

Salamanca is considered to be one of the safest cities in Spain, but in reality, it does have some dangers that you should be aware of.

It’s considered to be the safest mostly because, in Salamanca, violent crime is for the most part unheard of.

Even though violent crime is non-existent, it is recommended that you take some basic precautions measures since it is known to be crawling with pickpockets, especially around popular tourist landmarks.

Salamanca, like all other cities, has some safer and less safe neighborhoods.

Neighborhoods beyond the river line, on the outskirts of town, are not-so-good, and they aren’t recommended to foreign visitors.

The closer to the city center – Plaza Mayor that you can get, the housing gets more expensive, but also more crowded any time and safer.

They will probably rip you off you if you play.

How Does Salamanca Compare?