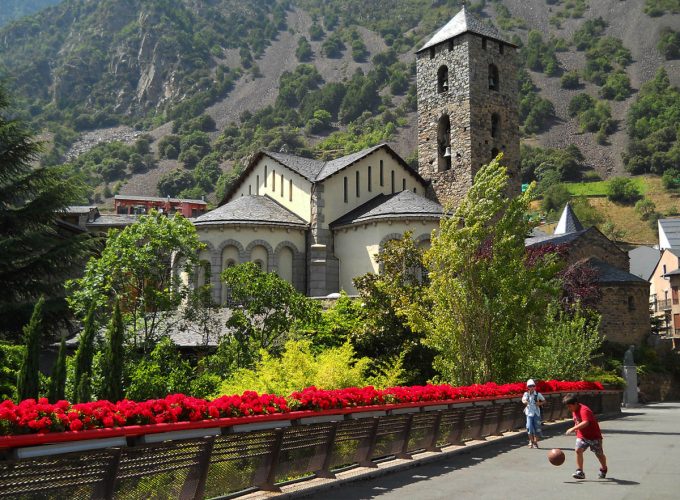 Andorra la Vella is located high in the east Pyrenees, between France and Spain.

This vibrant city is the center of all local events.

Just go and visit the piazza outside of the parliament building and get swept away with the town music festivals and cultural happenings every year.

This city is divided into two parts.

The newer section is located at the North end of the town, and that’s where you can spend some quality time shopping surrounded by commercial local shops.

The other half is the older part of town, located across the river.

It’s also filled with shops and places to eat and relax but it does have some history, too.

You can easily cover both of these areas on foot solely, but that’s a task for the lovers of a good walk because it will take you a good half hour to cover each part on foot.

Andorra la Vella is very safe to visit. Apart from the occasional pickpocket that might cross your path, which is common in this city, tourists should encounter no other problems. Use your common sense and your trip should go smoothly.

Transportation in Andorra la Vella is very safe and reliable, even though taxi drivers might try to overcharge their services or demand a tip. Also, be careful on public transport, as it's the place where pickpockets operate.

There are no pickpockets in the city of Andorra la Vella. Still, you should be careful when carrying your valuables and never leave them out of your sight - just in case.

Mugging is a rather rare occurrence here. Still, do not accept any unsolicited help or drinks from anyone you don't know (even though drink spiking is also not an issue in this city).

There haven't been recent terrorist attacks in Andorra la Vella, but in the light of recent events in this part of Europe, they shouldn't be ruled out, so you should remain vigilant and be aware of your surroundings at all times

Scammers are not too active in Andorra la Vella. Always check the bill twice in restaurants and bars since the staff may try to overcharge you or charge for something you did not order.

Women traveling alone should have no problems in this city. You should use your common sense, and be careful at night, avoid desert and poorly lit streets, and finding yourself alone with strange people in abandoned areas. Apart from that, you should have no safety problems in Andorra la Vella.

So... How Safe Is Andorra la Vella Really?

Andorra la Vella is a safe city to visit, but it is recommended that you take some basic precautions measures since tourists have been known to be targeted by occasional pickpockets, especially around popular tourist landmarks.

Be extremely careful in bus or train stations and other similar crowded places, since pickpocketing, although not too common, has been reported in such crowded places and areas frequented by tourists.

Scams are also not too common, but you should still be cautious at times, as this can happen with taxi drivers trying to trick you into paying a fixed price even though they have a visible fare table.

How Does Andorra la Vella Compare?