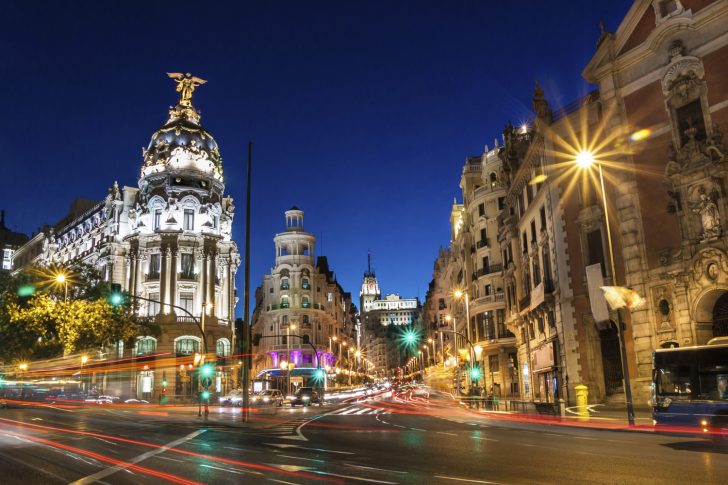 Madrid is the capital of Spain, and also the largest one in the county.

It has a population of roughly 3.3 million and a huge amount of tourists annually.

It’s no wonder that attracts as many tourists, because this city is one of the European prettiest capitals, with a great cultural and artistic heritage (just think of the enormous El Prado Museum) and rich history.

Madrid is also one of those cities where it only gets livelier as the sun goes down – it has some of the most vibrant nightlife in the world.

So, if you’re planning on visiting Madrid, you should know you’re in for a good time: it’s brimming with its famous plazas, parks, shopping opportunities, indoor and outdoor markets, gorgeous buildings and the amazingly fun nightlife we’ve mentioned before.

Madrid is very safe to visit. Apart from the pickpockets, which are common in this city due to an enormous amount of visitors, tourists should encounter no other problems. Use your common sense and your trip should go smoothly.

Transportation in Madrid is very safe and reliable, even though taxi drivers might try to overcharge their services or demand a tip. Also, be careful on public transport, as it's the place where pickpockets operate.

Madrid, much like Barcelona, is filled with tourists, and naturally, it attracts a bunch of pickpockets so watch out in crowded places such as bus and train stations. There is even a message played on repeat at stations, reminding you to be wary of pickpockets. Be careful when carrying your valuables and never leave them out of your sight.

There's no need to be afraid of getting mugged or kidnapped in Madrid since it is a rare occurrence here. Still, do not accept any unsolicited help or drinks from anyone you don't know (even though drink spiking is also not an issue in this city).

There haven't been recent terrorist attacks in Madrid, but in the light of recent events in Barcelona, they shouldn't be ruled out, so you should remain vigilant and be aware of your surroundings at all times.

There are a couple of ways to get scammed in Madrid. You should avoid gypsy women offering you some rosemary: they will read your future and ask for some money or pick your pockets with the help of another gypsy woman. Be wary of "trileros" and their "shell game" where you might get ripped off or stolen from. Always check the bill twice in restaurants and bars since the staff may try to overcharge you or charge for something you did not order.

So... How Safe Is Madrid Really?

Madrid is a safe city to visit, but it is recommended that you take some basic precautions measures since it is known to be crawling with pickpockets, especially around popular tourist landmarks and larger cities.

Also, exercise caution at the Spanish Flea Market (el Rastro) in Madrid over the weekends.

Here, the pickpockets operate in groups.

This can happen with taxi drivers trying to trick you into paying a fixed price from an airport to a city, even though they have a visible fare table. They may also demand a tip.

They will probably rip you off you if you play, and if you stop to see other people play, they’ll probably pick your pockets.

How Does Madrid Compare?