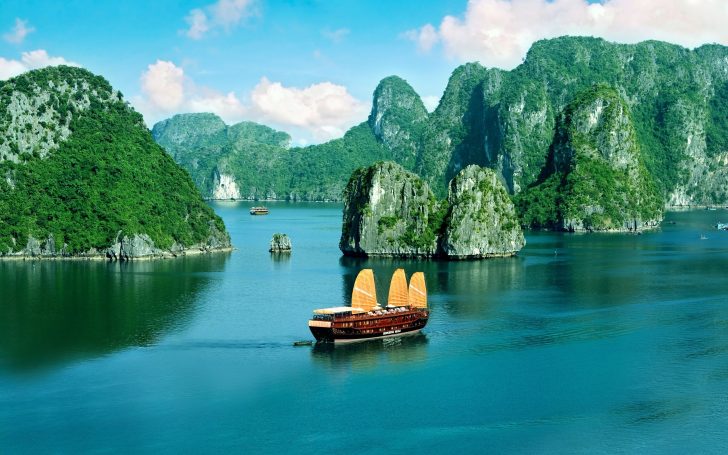 Halong city is a town located on the northern side of the Ha Long Bay Archipelago of Vietnam.

This city is primarily a transit point and is divided into two parts: Bai Chay and Hon Gai.

The Bai Chay part is perfect for tourists, offering them an abundance of hotels and restaurants.

Hon Gai is the local, more economic part with business and markets.

The two parts are connected by the enormous Bai Chay bridge.

This city has one of the biggest seaports in entire Vietnam, which is what makes it a major industrial center in Northern Vietnam.

This port receives imported fuel and oil supplying the whole of North Vietnam.

Unfortunately, during the war, the city of Halong was partly damaged, since it was a major target of the American Air Force.

Halong is a safe city to travel to. It is primarily a transit point, so tourists are not targeted by pickpockets nor are there instances of violent crimes towards them. There is some street crime, but much less than in Hanoi.

Means of transport and taxis aren't very safe in Halong. Even though you'll probably travel in a ‘private van’ throughout Halong, the road conditions are pretty bad, and fatalities are common.

Pickpocketing and bag snatching isn't a very common issue in Halong. Still, you should keep your belongings by your side at all times and try to leave all your valuables in a security deposit box of your hotel.

Natural threats include occasional typhoons (from May to January) with extensive flooding. In case of a natural disaster, follow the instructions of local authorities.

You can get overcharged by rental services in Halong, and pretty much everyone: street vendors, taxi and bus drivers, hotel owners and worst of all - the police. Double-check every information and payor negotiate everything in advance.

There is a certain risk for women traveling to Halong. Avoid overnight trains and buses, and parts of the city that are filled with bars and clubs, since there is a higher chance of running into intoxicated people. Follow basic common sense and avoid walking alone at night and in poorly lit and secluded areas.

So... How Safe Is Halong Really?

Halong Bay is a rather destination for both male and female tourists when it comes to petty crimes like pickpocketing and bag snatching.

As in any country, there are parts of this city that may be dangerous, as the entire trip from Hanoi to the point of boarding in Halong.

Though you’ll probably travel in a ‘private van’, the road conditions are pretty bad.

The most common risk for tourists in this city remains petty crime such as pickpocketing, purse snatching, and valuables theft, usually not involving violence of any kind.

One of the common issues in Halong is motorbike snatching.

As for streets, they are generally safe but some areas should be avoided, such as parts of cities filled with clubs and bars that are usually filled with suspicious individuals.

How Does Halong Compare?