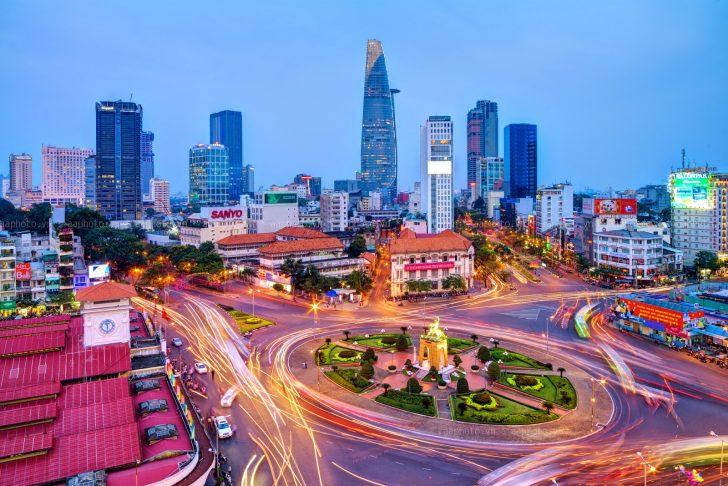 Ho Chi Minh City, also commonly referred to as Saigon is the largest city in Vietnam and the former capital of the Republic of Vietnam.

It has been “officially” renamed Ho Chi Minh City following the fall of Saigon in 1975, but before that it was known as Saigon and is still sometimes called that by both Vietnamese and foreigners.

An abundance of investments and construction boom lead to a huge change in the face of the city and the construction of many new skyscrapers all over the city.

Through all that, Ho Chi Minh preserved its own identity.

To this day, tourists rush to see the shady alleys with low structure French-style buildings, elegant Notre-Dame cathedral and the magnificent pagodas.

In the evening, though, they rush to Ho Chi Minh’s famous restaurants with delicious food and indulge in its vibrant nightlife.

Ho Chi Minh is a relatively safe city to travel to. Its main source of income is tourism, so the tourists' safety is their number one concern. The street crime is more common in cities like Ho Chi Minh and Hanoi.

Means of transport and taxis aren't very safe in Ho Chi Minh. Many taxis in Ho Chi Minh and Hanoi have previously installed rigged meters that charge up to 2 to 8 times more. Your best chance is taking a taxi from reputable companies such as Mai Linh and Vinasun in Ho Chi Minh. You should consult some guidebooks and travel forums before you travel to Vietnam that will prepare you for petty scams. There is also a very popular scam where the buses break down and the tour operators force people to pay considerable amounts for crummy hotels "while the bus is repaired".

Pickpocketing and bag snatching is a very common issue in Ho Chi Minh, especially on the side of the roads where motorbike snatching may occur. Keep your belongings by your side at all times and try to leave all your valuables in a security deposit box of your hotel.

There are some areas in Ho Chi Minh where cases of mugging have been reported, but it is generally rare, and foreigners are rarely targeted.

There is a number of scams performed on tourists in Vietnam, such as gambling scams where, if you do venture in gambling, there is a great risk you will be scammed or ripped off or karaoke scams: since prostitution is forbidden, you can find prostitutes in various karaoke bars, which are actually one big scam and their clients often get ripped off, drink spiked and robbed. Apart from these scams, you can get overcharged by everyone: street vendors, taxi and bus drivers, hotel owners and worst of all - the police. Double-check every information and pay, or negotiate everything in advance.

Sexual assaults are common in Vietnam, especially in the following cities: Hanoi, Ho Chi Minh City, Da Nang, Nha Trang, Sapa, and Cat Ba Island. Avoid overnight trains and buses, and parts of cities that are filled with bars and clubs, since there is a higher chance of running into intoxicated people. Follow basic common sense and avoid walking alone at night and in poorly lit and secluded areas.

So... How Safe Is Ho Chi Minh City Really?

Ho Chi Minh is generally a safe city, as safe as other similar cities throughout the world.

One of the common issues in Vietnam is motorbike snatching. This usually involves thieves on motorbikes snatching pedestrians’ bags, mobile phones, cameras, and jewelry.

They especially target foreigners and it happens mostly in Ho Chi Minh City, Hanoi, and Nha Trang, and it is a crime committed so regularly that even local Vietnamese are commonly targeted.

Also infamously common are thefts of valuables left on popular beaches. Never leave your bag or anything of value unattended on beaches.

Tourists should avoid fights and shouting of any kind because people of Vietnam think of shouting as an insult and in such situations, one never knows what their reaction is going to be.

As for streets, they are generally safe but some areas should be avoided, such as parts of Ho Chi Minh filled with clubs and bars that are usually filled with suspicious individuals.