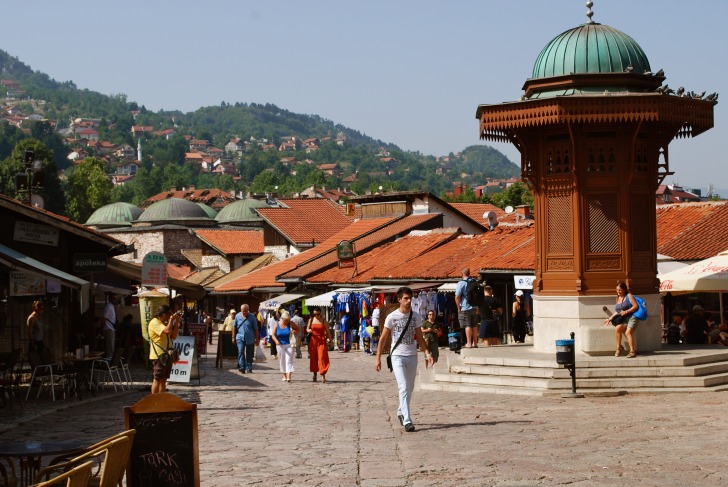 Bosnia and Herzegovina : Safety by City

Bosnia and Herzegovina - safety as a country

Sarajevo is one of the most historically interesting cities in Europe since it’s a site of great historical turbulence – more than once.

It has been severely damaged during the Yugoslav wars 1992-1995, but – by now, at least physically, it has mostly recovered.

Still, it’s also a place of hope where many cultures meet, live and tolerate each other.

The city is also known as a place of traditional religious diversity, with Islam, Orthodoxy, Catholicism, and Judaism coexisting there for centuries.

Sarajevo is generally a safe city. Its people are very kind and happy to help, and tourists especially shouldn't encounter any bigger problems in this country. Though crime is on the rise in this capital, it's still not a reason to worry, as it's mostly between organized crime gangs and doesn't concern tourists.

Transportation in Sarajevo is overall safe. Just be on the lookout for pickpockets on public transportation, and double-check if the taximeter is on when you enter a taxi.

Pickpocketing and bag snatching are the most common form of street crime in Sarajevo, so if you do encounter any problems it will probably be pickpocketing that mostly happens in public transportation. Be extremely careful when entering any bus in this country's capital, since its pickpockets are very skillful.

In the past couple of years, the only natural disaster that severely affected Sarajevo was flooding of large proportions, with even fatal results. The flooding in 2014 shifted some land mines and also some notices about unsafe areas.

Mugging exists in this city but is rare. There have been reports of kidnapping either as a consequence of someone failing to pay a debt, or kidnapping by rival criminal organizations since this sort of organized street crime is usually the most common of crime. Tourists are not under any sort of threat.

Terrorist attacks are more likely to happen in most popular European capitals such as Paris, London, etc., than in Sarajevo, even more so because it's mostly inhabited by people of the Muslim religion.

Any newcomer is in danger of scams when visiting a new city, and the same applies to Sarajevo. The most common scams are people ripping you off in bars or clubs, or by the street vendors, as well as drink spiking in strip clubs.

Sarajevo is very safe for women travelers. Attacks rarely happen, if ever, but still, be on the lookout at all times, especially at night, or in deserted areas, empty, poorly lit streets, etc.

So... How Safe Is Sarajevo Really?

Just like in the rest of Bosnia and Herzegovina, the biggest danger in this city is the fact that there are still many minefields and much-unexploded mines, bombs and explosive remnants left since the Yugoslav wars in the Sarajevo area, and its surrounding suburbs.

Never go into damaged buildings – and you’ll see them a lot in Sarajevo – and always stick to paved surfaces: by all means, also stay away from the grassy hills that surround the city.

Bear in mind that the areas that are not cleared are marked by yellow tape or signs.

As in most other cities, you should be aware of pickpockets who usually operate on public vehicles and in the old city.

Sarajevo is notorious for having petty street crime, unlike other cities in Bosnia and Herzegovina.

And while the city isn’t particularly dangerous for tourists when it comes to violent street crime, you should be careful when you cross the street since Bosnian drivers speed and don’t pay any mind to pedestrians.

Unfortunately, if you’re the driver – the same thing goes for pedestrians – there’s a general lack of respect towards traffic as a whole since every so often pedestrians too cross the street in the wrong place and don’t pay attention at all.

How Does Sarajevo Compare?