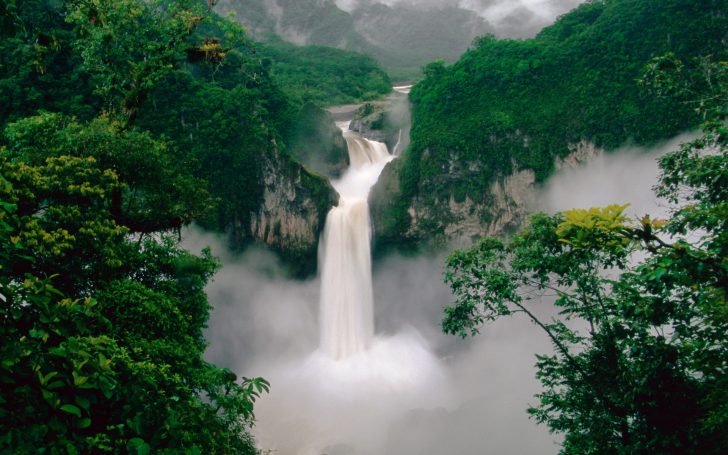 Ecuador is a country located in Northwestern South America, sharing its borders with Colombia, to the northeast, and Peru, to the south and east.

It also has a Pacific Ocean coastline which makes it especially interesting for summer lovers, but that’s not the main reason people visit this country in South America.

Its reputation is that of one of the most biodiverse countries in the world, with one hundred different types of hummingbirds and thousands of orchid varieties.

There are plenty of reserves and national parks such as Cuyabeno Wild Life Reserve, Mindo and San Luis de Pambil where you can spot many types of flora and fauna.

And don’t forget the Galapagos Islands, worldly famous for their wildlife.

But it’s not just jaw-dropping flaura and fauna that this country boasts.

There’s the world’s highest active volcano Cotopaxi and a number of cities and sites in Ecuador that are listed as UNESCO World Heritage Sites, such as the aforementioned Galapagos Islands, and the city of Cuenca.

Ecuador is a place for the real nature loving tourist, and a paradise for visitors trying to immerse themselves in breathtaking beaches like Salinas, Bahia de Caraquez, Manta, Crucita, San Jacinto, and San Clemente.

Ecuador is somewhat safe to visit, though it has many dangers. You should be aware that tourist hotspots, restaurants, shops and public transportation are places where most thefts and pickpocketing occur, and that violent crime exists on the streets, too.

Transportation is not very safe or reliable. There have been robberies in public transport operating in Quito, Riobamba, and Baños. Most of these robberies take place at night and on interstate buses. Be wary of unlicensed taxis since you might get kidnapped and robbed. You'll know the official cab by the orange license plates or white plates with an orange strip on the top and video cameras inside.

As for pickpocketing and bag snatching, it is a recurring concern on the streets of Ecuador, so be careful and hold your bags tightly by your side. There are pickpockets on motorcycles passing by and snatching everything they can from your car, so keep your car windows up.

During the rainy season lasting from December to May, you can expect common flooding and tsunamis. Apart from that volcanic eruptions and earthquakes are to be expected.

Though other South American countries are known for getting stabbed, mugged or kidnapped on the streets, the most common form of crime is petty theft and the weapons criminals use are mostly only there to scare you. However, there are kidnappings in taxis where the robbers keep you hostage until they take everything from you and make you withdraw all your money from the nearest ATM, so be very careful.

The risks of terrorist attacks in Ecuador are low, but since they shouldn't be ruled out, it is important that you remain vigilant at all times and aware of your surroundings.

As in almost any countries, there is a great risk of getting scammed. Always check everything twice and negotiate everything in advance. Taxi drivers might try to trick you into paying more, giving you wrongful information about the price of the ride.

Many women have traveled to Ecuador and haven't had any problems at all. However, this country isn't the safest in terms of females traveling solo, especially at night and you should exercise precaution measures at all times and avoid dark and empty streets and locations

So... How Safe Is Ecuador Really?

Ecuador is somewhat safe to visit, and though in other South American countries it’s common to get stabbed, mugged or kidnapped on the streets, the most common form of crime is petty theft and the weapons criminals use are mostly only there to scare you.

Keep in mind that taxi robbery is a danger in Quito, Guayaquil, Manta, Machala, Playas, and other coastal towns.

Typically, a tourist boards a taxi where the driver is the accomplice, and the criminals hop into the cab right after the victim, robbing, assaulting and keeping the victim hostage.

In some cases, they take you to the nearest ATM and force you to withdraw everything from your bank account.

Apart from the pickpockets, muggers and scammers, you should bear in mind that the biggest crooks in this country are the seemingly friendly experts who “just want to help you”, by telling you that they can get you a great deal on the Galapagos islands cruise, and then charge an astronomically high fee compared to the real cost of the cruise.

How Does Ecuador Compare?