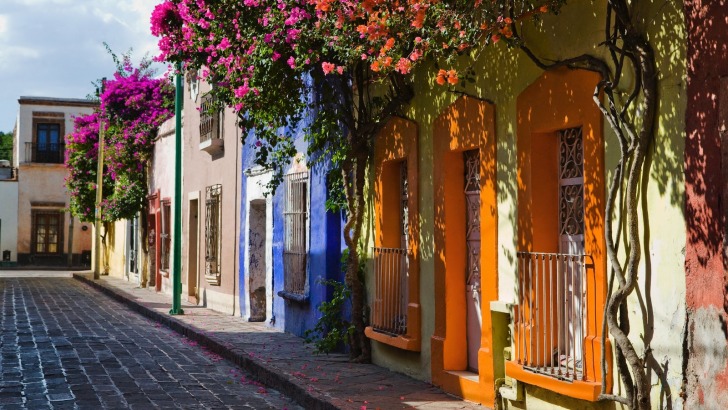 Queretaro is a city in central Mexico and the capital of the state of Queretaro.

The city’s full name is “Santiago de Queretaro” but nobody uses its full name.

For many, it’s an unbelievably safe city (safer than most US cities), has a great private education system, fantastic and affordable healthcare, some of the best restaurants in the world, the ideal weather, and one of the strongest economies in Mexico.

You also have a number of fantastic destinations within a few hours of driving.

San Miguel de Allende is an easy 45-minute drive and is a great place to wander, explore, and spend a day.

Bernal is another easy day trip.

Queretaro City is a very safe city: in fact, there isn't too much to worry about in this city compared to many other cities in Mexico. Just in case, you should apply all possible precaution measures, to minimize the chances of anything going wrong.

Even though public transport is an issue in Mexico, in general, Queretaro doesn't seem to have that problem. Still, be very careful as this is one of the primary places where pickpockets operate.

Pickpocketing and bag snatching is a somewhat common issue in Queretaro, especially in public and crowded places like bus and train stations and airports. Keep your belongings by your side at all times and try to leave all your valuables in a security deposit box of your hotel.

Queretaro isn't prone to suffer from natural disasters except for occasional earthquakes happening in the near vicinity of the city.

Muggings and kidnappings are not typical for this area since this is a very peaceful city when it comes to violent crimes. Still, avoid poorly lit and abandoned areas.

There haven't been any terrorist attacks in Queretaro's recent history, but they shouldn't be ruled out. Remain vigilant at all times and aware of your surroundings.

You should be very vigilant, decline all drinks sent by strangers, double-check all information and negotiate everything in advance. Be wary of people trying to distract you as it may be a scheme to try and steal from you.

Many women have traveled safely to Queretaro, without having any problems, and it's the norm here. Still, avoid parts of cities that are filled with bars and clubs, and visiting them alone, since there is a higher chance of running into intoxicated people.

So... How Safe Is Queretaro City Really?

Queretaro City is, overall, a safe place to be in and to visit: in fact, its residents claim that the quality of living in Queretaro is exceptionally high.

Queretaro certainly has a lower crime rate than most medium-large American cities.

Queretaro is considered one of the safest cities in Mexico.

Due to this, and to its buoyant industrial economy, it leads the country in internal migration statistics (people who migrate from other parts of Mexico).

Many of them are fleeing from the violence that is observed in other parts of the country.

While crime does happen, as it does everywhere in the world, your odds of being safe are very good if you stay in the tourist areas, keep a low profile and avoid lonely places – basically, just use good old common sense!

For the most part, crime in the city is isolated and limited to certain hot spots.

It would be best to avoid the areas around the boroughs of San José el Alto, Santa Rosa Járegui, Casa Blanca and Menchaca (where you probably have nothing to do anyway).

Downtown is beautiful and completely safe, the rural areas are great for a visit as well as the ancient ruins and the malls are safe, too.

How Does Queretaro City Compare?