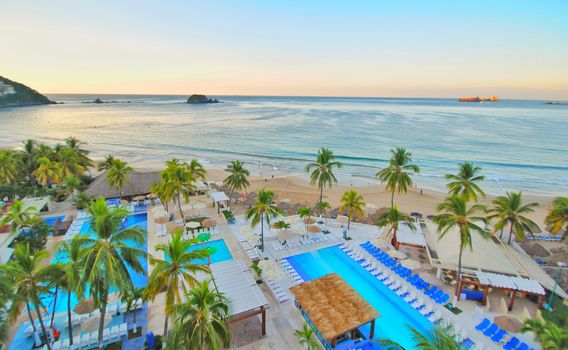 Ixtapa has transformed into a world-class resort city with its stunning beach.

If you do not have any idea on what to do when coming to Ixtapa, we suggest that Delfiniti should be on your list of places to visit.

Those interested in history should go to the Mayan Ruins of Xihuacan Museum and Archaeological Site.

There are also some luxurious activities that can be done here, so you can go to the Marina Ixtapa Nautica Golf Club.

Crime and violence are serious problems in Mexico and that is the reason why so many foreigners avoid visiting this beautify country, Generally, we can say that vigilant tourists would spend holidays in Ixtapa without having to worry about their security.

Those who decide to drive must keep car doors locked and windows closed, even at traffic lights. There have been a number of violent car-jackings and robberies, so avoid poor lit areas and do not leave valuables in the car.

Just as in any other city, pickpockets are everywhere around Ixtapa. You need to take care when walking the streets and when you are in public transport as those are locations where thieves operate.

One of the possible natural disasters is the hurricane and its season runs from June to November. Both the Pacific and Atlantic coasts can be affected.

There is a possibility of violent criminal acts and, in some instances, tourists were attacked or just happened to be in the wrong place at the wrong time.

Travelers should not worry about terrorism when in Mexico as there were no incidents in recent years. However, the attacks cannot be ruled out.

Taxi drivers might try to overcharge for their service so it is better to agree on the price prior to starting the ride. Also, the instances of spiked food and drink with the aim of assaulting and robbing are not rare, so be vigilant.

Being that women are easy prey for attackers, they need to be aware of their surroundings and avoid walking alone. It is better to be in a group than to regret later on.

So... How Safe Is Ixtapa Really?

Due to the fact that there is a possibility of tropical storms and hurricanes to happen in Ixtapa, which can cause flooding and landslides, travelers are suggested to get acquainted with the current situation prior to coming to a certain area.

It is not uncommon that police ask people to show their identification documents, so you should carry photocopies of your passport and of the stamped ‘Forma Migratoria Múltiple’ at all times.

Even though the Mexican government makes efforts to protect major tourist destinations and they have managed to achieve that these locations do not experience the levels of drug-related violence and crime experienced in some other cities, the incidents have been reported.

Tourists have not been the target of violent incidents in the majority of cases,  there is still the chance that anyone in the vicinity of an incident can be affected.

If in some cases you become the victim of a crime, you must report the incident immediately by going to the nearest branch of the police.