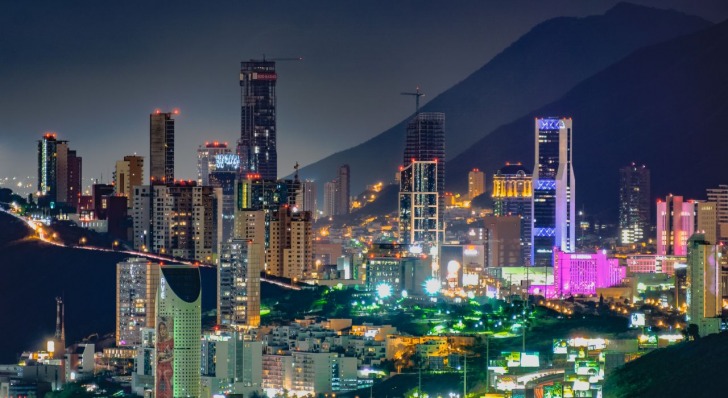 Monterrey is the third-largest city in the country of Mexico and the capital of Nuevo Leon.

Monterrey is also the commercial, industrial, educational, and transportation center of northern Mexico, not to mention that it’s economically the third in importance after Mexico City.

There are plenty of good restaurants, shopping malls, movie theaters but do not expect to find too many historical sites, museums, and the like.

One downside is that you need to own a car or take public transportation to get anywhere.

The city is divided by a river, and two big avenues along the river are the main corridors of the city.

Monterrey is somewhat safe, but it does have some very dangerous parts. You should apply all possible precaution measures, to minimize the chances of anything going wrong.

Public transportation in Mexico, in general, is the primary place where pickpockets operate. You should always try to call your reliable taxi driver instead of hailing one on the streets and be especially careful on railway and bus stations.

Pickpockets are a common occurrence here and bag snatching is a very common issue in Monterrey, especially in public and crowded places like bus and train stations and airports. Keep your belongings by your side at all times.

Monterrey is a city prone to floods, most of all. The situation isn't serious though, but it is one of the primary natural disasters that can hit this city. Apart from that, be careful when swimming on the beaches near Monterrey because people have been known to drown.

Muggings and kidnappings do happen but rarely to tourists or anyone who isn't involved in criminal activities. But just in case, avoid poorly lit areas and deserted streets.

There haven't been any terrorist attacks in Monterrey's recent history, but they shouldn't be ruled out. Remain vigilant at all times and aware of your surroundings.

You should be very street smart to avoid the many scams that might cross your way. Decline all drinks sent by strangers, double-check all information and negotiate everything in advance.

Unfortunately, many women will have a problem with being cat-called on the streets, while they might find whistles and comments directed at the offensive. Avoid parts of cities that are filled with bars and clubs. There aren't any more serious threats in Monterrey.

So... How Safe Is Monterrey Really?

Like any big city in the world is not crime-free and the usual precautions that you would take in NY or Chicago should be exercised here.

Sporadically there can be a gang-war shootout on the street but you will rarely hear of an innocent person being killed in such incidents.

Crime-wise, just like any bigger city, there are parts of town that you would be wise to skip, but it is as safe as any US city of its size: you can move around just as freely and with the same basic precautions.

All in all, Monterrey is much safer than it’s presented in the media: you can walk around, go to the malls, go running and do your daily chores with no problems.

The only thing that is somewhat out of the ordinary is the constant and very visible police presence.

You can see police cars on the roads very frequently, multiple times every single day doing their rounds.

This a good thing but a reminder that you should always remain vigilant and never completely relax.

The fact that it’s not as dangerous as you may have heard doesn’t mean that the safety level is high.

Namely, if you hail a cab, you may get in a situation where the cabbies will tell you they don’t go to certain parts of town at night and recommended to avoid those places.