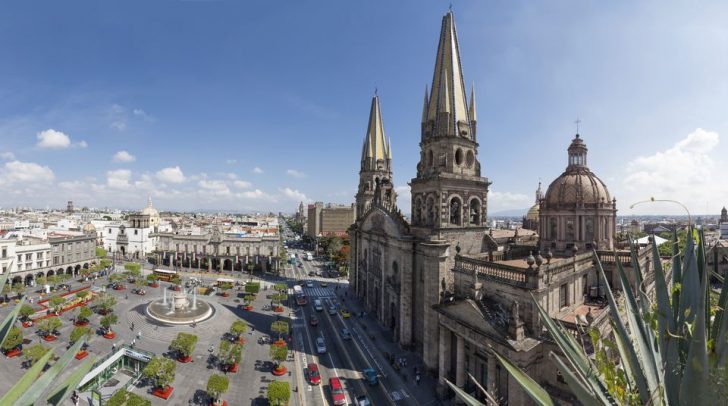 Guadalajara is the second-largest city in Mexico and is a cultural center with an inspiring combination of new and old.

The city is where Mariachi music began, and some say tequila also started here.

It is home to the Guadalajara International Film Festival.

The city also hosts the largest Spanish language book fair in the world.

The city is also a silicon valley of sorts for Mexico, with a lot of hi-tech companies operating here.

The colonial heritage also remains strong, with architecture in famous cathedrals and other public buildings.

It is bathed in tradition, but also vibrant in its modern cosmopolitan feel.

It is about 200 miles from the Pacific coast in a valley surrounded by mountains.

Guadalajara is a very large city with 4.4 million people, so some crime is to be expected.The U.S. State Dept. gives the state of Jalisco the second-highest warning level because of crime and Covid-19.Car theft is a major problem.Some caution is advised, but if you stay in tourist areas and don't venture out alone at night, you should not have any problems.

Registered taxis are safe, and hotels and restaurants will summon them for you.Do not hail taxis on the street or take rides with unregistered taxis.Buses and trains tend to be crowded and have pickpocket operators around. Armed robberies sometimes happen on buses. Chartered buses for groups are safe, but be careful on buses for the general public or trains.

Especially on a crowded bus, or bus or train station, a pickpocket can steal your wallet without you realizing it at the time.They tend to focus on tourist areas and people who appear careless or intoxicated. Don't look like a tourist, protect your valuables, and don't let anyone see your electronics or cash.Blend in with the crowd to be a less obvious target.

There seem to be two worlds at Guadalajara, one in the day and a different one at night.During the day it is very safe in tourist areas, but at night it can be dangerous.You should not be out alone, especially at night, and during the day don't get caught in areas where you could be trapped. Armed robberies involve buses or public transportation.

The risk was higher a few years ago when drug cartels were active in the area.The city has done a lot to distance itself from drug activities.Cartels and gangs are not very active now.There is very little terrorism in Mexico and not much at all in Guadalajara.

There are more and more tourists in Guadalajara, and that means more scam operators are showing up.Scammers like to work on tourists, from fake tours, fake souvenirs, fake taxies, and everything else.Restaurants sometimes have a different menu for tourists, with higher prices than what locals pay.Places of business will add to your credit card bill if you are not paying attention.

If women stay in groups and stay in tourist areas there is very little danger.It is dangerous for a woman alone, however, and especially outside of the tourist areas or at night.There have also been cases of people taking advantage of intoxicated women in clubs.Don't go out alone, and don't accept drinks from strangers in bars.There is some risk, but it is not more dangerous than any other big city.

If you drink tap water in Guadalajara, or anywhere in Mexico, you will very likely get sick for a day or two.Some of that is just differences in water, and some are due to pollution.Montezuma's Revenge is real.Don't take chances, even by using ice that restaurants may have made from tap water.

Safest Places to Visit in Guadalajara

The city’s historic center is a place you must see.

Amazing cultural and historic sights, museums, restaurants, and the best hotels. There is also added security.

Zapopan, a separate city within the greater city,  is home to the Basilica of Zapopan.

There are lots of concerts here and a great tourist area.

The fairgrounds and the exhibition center are home to many outstanding events.

The Chapalita district is home to many restaurants and some very nice homes.

It is a rich area of the city, and a pleasant cosmopolitan area to enjoy.

Tlaquepaque is an artisan area where pottery, textiles, and blown glass crafts are popular.

This is an artsy area, but some say it can be dangerous at night.

Colonia Americana is a trendy area with ancient buildings, trendy restaurants, and bars.

It has a thriving nightlife that many people enjoy, with a full dose of mariachi Mexican flair.

Places to Avoid in Guadalajara

There is no reason to come here.

Be careful anywhere in the city when you are not in a tourist zone.

Ask locals, and at your hotel, about which areas to avoid.

The east side of that tends to be underdeveloped, poor, and dangerous.

Oblatos is an area on the edge of town with majestic views of a canyon and the mountains.

It is safe during the day, but not at night.

It is a nice hiking area in the day, but at night there are a lot of drug deals and other unsavory types wandering around.

Safety Tips for Traveling to Guadalajara

This is constantly said about Mexico, and it is true.

It will make you sick for a couple of days and cost you some vacation time.

Avoid the ice too.

Many water systems are contaminated, and it is not worth the risk.

It is confusing and not well marked.

It is better to take tours or taxis.

Public transportation can also be even more dangerous at night.

Consider tour groups as a means of getting around.

3 Only use registered taxis, which are clearly labeled.

Your hotel or a restaurant will call a registered cab for you.

Fake taxis are used to rob people and rape women.

Don’t accept a ride from a random person on the street.

Keep your camera and other electronics hidden and use them discretely.

Always act like you know where you are going, even when you don’t.

Pickpockets and other criminals look for confused people to victimize and they won’t usually bother a person who looks confident.

5. Bring an umbrella and be prepared for rain.

In the summer months, rain is common in the afternoon, but it passes quickly and dries up fast.

Keep in mind summer can be very hot, so dress accordingly and use sunscreen.

If something doesn’t feel right, there is probably something wrong.

Get away from such a situation immediately and don’t worry about being polite.

Even if you turn out to be wrong, it is better to not risk getting into a bad situation.

This is common advice for any city anywhere in the world, but it is very good advice.

Criminals are out at night, and they look for people who are alone that they can rob, or worse.

Knowing a few key phrases and words will be a big help in a new city.

People are more likely to want to help you if they see you at least trying to speak their language.

9. No drugs and not much drinking.

Don’t get involved in any shady deals or drugs, and don’t drink too much.

These are usually dangerous and violent people, and you could easily get seriously injured.

If the police get involved, your problems will only increase.

You will get updates on your destination, and it will be easier for officials to find you if there is an emergency.

This will give you an app for your phone that will be very useful and will help keep you safe.

How Does Guadalajara Compare?