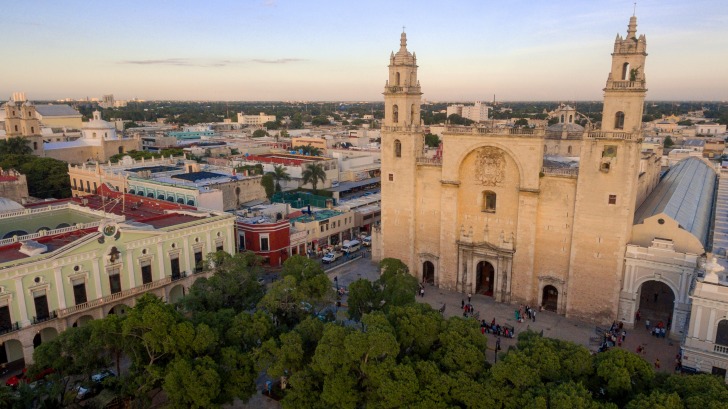 Merida is the capital of the Yucatán state in Mexico, and as such, serves as an important city of the country.

It’s a relatively peaceful city, more or less unscathed by the drug war.

This is possibly the case because of the rumors that the city is a safe zone for the families of the victims of drug cartels, a neutral spot of sorts.

The city also has a rich history with a very charming colonial center and wonderful well-preserved architecture.

Merida is a very safe city: in fact, many say that it's the safest city in Mexico. Just in case, you should apply all possible precaution measures, to minimize the chances of anything going wrong.

Even though public transport is an issue in Mexico, in general, Merida doesn't seem to have that problem. Still, be very careful as this is one of the primary places where pickpockets operate.

Pickpocketing and bag snatching is a somewhat common issue in Merida, especially in public and crowded places like bus and train stations and airports. Keep your belongings by your side at all times and try to leave all your valuables in a security deposit box of your hotel.

Merida isn't prone to suffer from natural disasters like many other cities in Mexico. The biggest risk for tourists lurks at the beaches of the Pacific Ocean as there have been reports of swimmers drowning.

Muggings and kidnappings are not typical for this area since this is a very peaceful city when it comes to violent crimes. Still, avoid poorly lit and abandoned areas.

There haven't been any terrorist attacks in Merida's recent history, but they shouldn't be ruled out. Remain vigilant at all times and aware of your surroundings.

You should be very vigilant, decline all drinks sent by strangers, double-check all information and negotiate everything in advance. Be wary of people trying to distract you as it may be a scheme to try and steal from you.

Many women have traveled safely to Merida, without having any problems, and it's the norm here. Still, avoid parts of cities that are filled with bars and clubs, and visiting them alone, since there is a higher chance of running into intoxicated people.

So... How Safe Is Merida Really?

In general Merida is a safe city, however, certain places are a little bit dangerous.

But this happens in every city in the world.

Many say that Merida is one of the safest cities in the continent, so there are no seriously bad neighborhoods.

Having said all this, you may want to be careful in the south side of the city since there have been rumors about violent gangs living in small private housing areas.

Other than that rumor I have never seen even a fight in the city.

It doesn’t have bad neighborhoods: instead, some of the neighborhoods are inhabited by a more affluent society while others by the working class.

Keep an eye on your things.

While safe and charming, it is the real world, too.

And while the city is safe as can be, tourists are still advised to stay in populated areas, avoid poor neighborhoods, and if they do visit them, not to go out at night.

And though they aren’t too common, you might encounter some beggars.

They are usually not a threat but avoid being surrounded by them because they might try to steal something.

How Does Merida Compare?