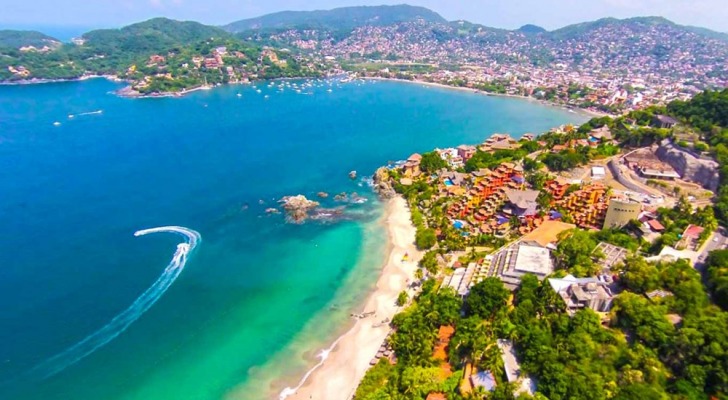 If you are thinking about what the best things to do in Zihuatanejo are, we have to say that not visiting its playas while there would be something you will regret later.

Zihuatanejo is a town on the Pacific Coast in the state of Guerrero which boasts with beaches that offer aquamarine waters to either swim or do snorkeling.

The reason why people choose Zihuatanejo rather than Ixtapa which is very close to it is that this place is not that urban, and allows you to see the bay under your own pace.

Do not miss Playa La Ropa which is 1.5 kilometers away from the town, as well as Playa las Gatas which has beach bars and restaurants amid the palms behind.

You should be watchful all the time while in Zihuatanejo and follow all the advice we have mentioned above. Have in mind that it is generally safer to use ATMs during the day and try to find those that are inside shops or malls.

You might be robbed while in public transport as those are places where thieves and robber work. If you decide to drive there, beware of vehicles moving slowly and do not stop in case somebody asks for help on a road.

Just like everywhere, pickpockets work in Zihuatanejo too. They tend to attack disoriented people, so never show that you are lost. Also, they might try to distract your attention and take your belongings.

Besides earthquakes and tremors which can be experienced in Mexico, the hurricane season runs from June to November and can affect both the Pacific and Atlantic coasts.

Being that there is a possibility of being mugged in Zihuatanejo, our suggestion is not to resist and give your money and possessions, as your life is more important.

Mexico is among those countries where terrorism has not happened in recent years, and the possibility of the attack to happen is low.

When scams risks are in question, tourists have to know that there might be people presenting themselves as police officers who would try to fine or arrest you. Always ask for identification if this happens to you.

Many of female tourists spend their holidays trouble-free. On the other hand, there are those who experience some troubles here. You are suggested to not to attract attention and do not go out alone at night.

So... How Safe Is Zihuatanejo Really?

In case a hurricane happens while you are in Zihuatanejo, you need to be aware that it can cause flooding and landslides, so be prepared to act wisely and listen to the advice of the authorities.

Foreign visitors are frequently targeted by scammers so be wary of strangers approaching you, especially in crowded areas.

If a person stops you and wants to fine you without any reason, it might be a thief dressed up as a police officer, so you should ask for identification and if he/she cannot provide it, call for help.

However, there might be the chance that a real police officer stops you, but he/she will not try to arrest you but would ask for your identification, so you should take the copy of your passport all the time with yourself and show it to them.

Be very careful when withdrawing money from ATMs, as thieves are observing these places and would follow you until they find the situation in which you are most vulnerable to attack you.

There were instances when people were kidnapped after they have exchanged money.

In case this happens to you, you should not resist, but give them what they want.

Your life is more important than your possessions.

How Does Zihuatanejo Compare?