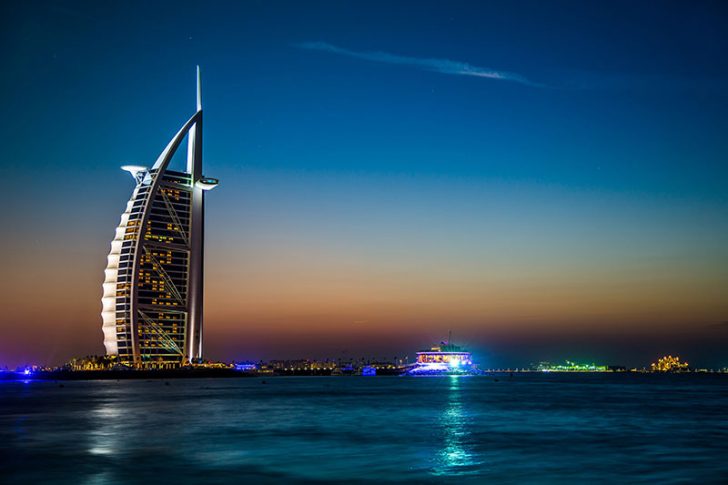 Dubai is one of the seven emirates that the United Arab Emirates is made of.

It is a relatively new destination that became popular during the recent years when its infrastructure started growing exponentially.

It can be considered something of an independent city-state and hands down the most modern and progressive emirate in the UAE.

For years now, it has been an incredibly fast developing place, where tourist arrive in hordes to see the new technological and architectural marvels and enjoy the never before seen shopping malls.

Given that it is located just five hours from Europe and three hours from most of Middle and Near East, as well as the subcontinent of India, Dubai is an excellent short-break destination where you can relax and rest from your travels with a little bih of shopping, sunbathing, dining and enjoying many social events.

Dubai is a very safe city to travel to. Many say that the UAE is among the safest countries in the world. Overall, safety should not be an issue if you plan on traveling to UAE.

There is some risk of an accident happening while you are on the road due to unpredictable driving behaviour. Driving off-road is definitely not recommended since it can lead to dangerous accidents. Be sure that your vehicle is well-equipped and that you have enough water with you.

Even though pick-pocketing is expected to be rare since the residents of UAE are mainly foreigners, it still does happen due to the fact that there are as many as 14 million tourist visits a year. It is recommended that you pay attention to your surroundings at all times, especially when around Jemeirah Beach, a known pickpockets spot.

Among the natural disasters threatening Dubai are very high temperatures, reaching higher than 50C. Sand storms are also a common occurrence in this country, as well as thunderstorms. If you wish to acquire some more information on natural disasters, visit the Global Disaster Alert and Coordination System.

As mentioned above, UAE is a country where the biggest part of the population is made of foreigners, so occurances such as mugging and kidnapping, in Dubai especially, is fairly low. Foreigners avoid crime as such, because it would immediately lead to them being deported.

Since this country is known to be rich and prosperous, there are almost no scams in this territory. Avoid scammers in shopping malls who will try to get you to answer some questions to win a prize. They do this to sell a travel package to you.

Female travelers are faced with the same amount of risk as they do when traveling to European cities, Canada, the USA or Australia. Take normal precaution measures and avoid going too dark areas and walking down the streets late at night.

So... How Safe Is Dubai Really?

Dubai very safe to travel to.

That doesn’t mean there isn’t any crime, there is, especially around main tourist attractions, but tourists are rarely targeted.

More often than not, violence in Dubai is domestic.

The reason it is so safe is that most of the people (employees) in UAE, in general, are from other countries, and most locals are pretty well off so they’re probably not going to pickpocket you.

Apart from that, the fact that the majority of people you’ll interact with are foreigners means that if they try to commit any crime, they will immediately get deported, and that fact alone prevents crime.

The biggest risk you might encounter when it comes to street violence and crime is pickpocketing, around landmarks and tourist destinations such as Jumeirah Beach and poorer areas like Sonapur, Shindagha, and Satwa.

Other risks that you should take into account when you plan on traveling to UAE, are natural disasters such as sandstorms and thunderstorms, and a constant risk of a terrorist attack, mainly in the Gulf region.

How Does Dubai Compare?