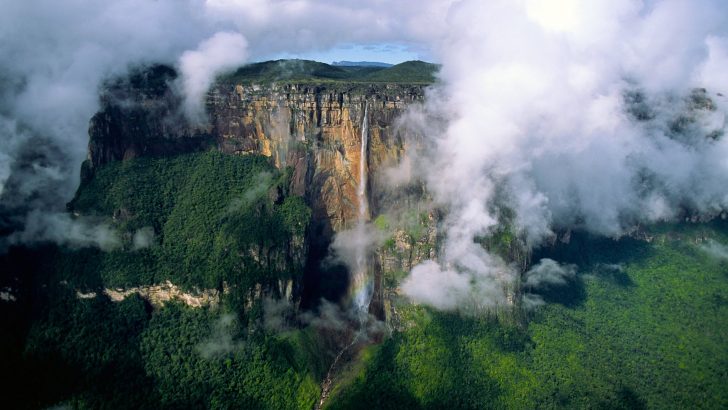 Guyana, officially known as the Co-operative Republic of Guyana is a sovereign state located in the northern mainland of South America.

However, it has such strong cultural, historical and political ties with other Anglo Caribbean countries, that it’s often considered part of the Caribbean region.

Guyana shares its borders with the Atlantic Ocean to the north, Brazil to the south and southwest, Suriname to the east and Venezuela to the west.

Guyana is the only South American nation in which English is the official language which makes things that much easier for an average tourist, though the majority of the population speaks Guyanese Creole, an English-based creole language.

A must-see for all tourists is definitely the Kaieteur Falls, which are monumentally five times the height of Niagara Falls.

This place can be accessed by a short plane flight from the capital.

Lovers of summer activities can enjoy the gorgeous Shell Beach where they can see a range of Leatherback, Green and Olive Ridley turtles laying eggs.

For those in the mood for hiking, there are Merume Mountains, with a legend to follow: the legend has it that no one has been to the top of the Merume Mountains, or found the source of the Mazaruni river rumored to be within them.

Even though this country is known for its welcoming people, you should keep in mind that it is still filled with dangers to bear in mind. Apart from petty theft, there is serious violent crime to consider so apply all possible precaution measures before venturing into this beautiful country.

Transportation is generally not the best in Guyana. Road conditions are generally poor, the bus service, although it is frequent, isn't very reliable or safe and it is best to travel by taxi, especially at night. Be particularly careful on public transport for pickpockets that operate on buses and trains.

As in most countries in the world – where there are tourists, there are pickpockets. Pickpocketing and purse snatching are frequent in Guyana, particularly in the busiest areas of the country, like Georgetown. The general area of Stabroek Market and the area behind Bourda Market are places where petty crimes have been reported so apply caution when around these places.

Petty crime can sometimes turn violent so your best bet is to just hand over everything you own immediately. The problem is that violent crime in general in this country is a serious issue, with murder rate that is three times higher than that of the United States. Armed robberies, muggings, burglaries, assaults and rapes are frequent. Areas where you should be particularly cautious include the village of Buxton, which is located along the road that leads from Georgetown to New Amsterdam, as well as Agricola, which sits near the East Bank highway.

Although there haven't been any terrorist attacks in Guyana's recent history, they shouldn't be ruled out so remain vigilant at all times.

As in almost any countries, there is a great risk of getting scammed in Guyana, too. Always check everything twice and negotiate everything in advance. Taxi drivers might try to trick you into paying more, giving you wrongful information about the price of the ride.

Women should definitely not travel alone in Guyana, but in a group or within a tour, especially at night but this applies to daytime, too. You should exercise precaution at all times and avoid dark and empty streets and locations.

So... How Safe Is Guyana Really?

Guyana is not known as a particularly safe destination, with Georgetown being notorious for petty street crime.

Never carry all your money with you: in fact, do not carry large amounts of it at all.

Never walk alone both during night and day, as daytime is not a guarantee that you’re safe.

Avoid areas such as the Tiger Bay area east of Main Street and the entire southeastern part of the city including Albouystown and Ruimveldt, though if you’re in a group, you might pass by these places and you probably won’t have any problems, particularly if you’re with a native company.

Do not count on police assistance, as they will probably help you only if they see a criminal act occurring in front of them.

The good news is that the inner regions of the country where you can explore the famous, breathtaking waterfalls of this region and the vast rainforests are completely safe and crime-free.

Generally, once you leave the major cities and venture into rural areas, you will enter a friendly and warm atmosphere.

The interior regions with the breath-taking waterfalls and the beautiful rainforests and mountains are perfectly safe.

Before you travel to Guyana, make sure you get immunized for yellow fever, as well as malaria and dengue fever, though it has appeared only in the inner parts of the country.

Yellow fever is endemic to this area and you can catch it even in cities.

How Does Guyana Compare?