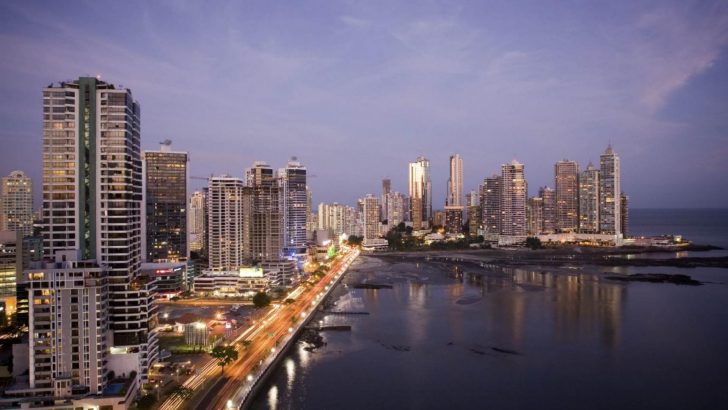 Panama is located in Central America, boasting two coastlines: one on the Caribbean Sea and one on the North Pacific Ocean, with Colombia (and, of course, entire South America) to the southeast and Costa Rica (and the North American continent) to the northwest.

The most interesting part about it, both geographically and from a touristic point of view, is that it’s located on the isthmus that forms the land bridge connecting North and South America and controls the Panama Canal – the world-famous canal that connects the North Atlantic Ocean via the Caribbean Sea with the North Pacific Ocean, probably the most important and best known shipping routes in the world.

Panama slowly grew into one of the most popular tourist destinations in the world: tourists can visit two different oceans and coastlines, go climbing mountains, hiking through rainforests and enjoy the impressive city life which offers to its visitors’ contemporary art, fashion and fine dining.

However, the central marvel and the biggest attraction is still the Panama Canal and it can be seen via an aerial view through the local operator, and you can even enjoy stunt and trick flights with veteran air force pilots and skydives over this engineering miracle.

Panama is generally safe, but you should take precaution on the streets of major cities, and after dark. Be wary of pickpockets and bear in mind that mugging and violent crime are also part of this country's street life.

Public transport is generally safe in Panama, but do be careful on buses and bus stops since that's where pickpockets and petty thieves operate. Bear in mind that bus stations tend to be high crime areas, and whenever possible opt for calling a taxi instead of hailing one on the street.

Pickpockets are a common occurrence on the streets of Panama and tourists are recommended to remain vigilant at all times when on the street. Make sure you don't flash your valuables on the street, be careful when withdrawing money from ATMs and of course, keep all your valuables in a safe place in your accommodation or safely by your side.

Ocean currents, hurricanes, earthquakes, and floods are only some of the natural disasters that sometimes hit Panama.

Violent crime exists in Panama and mugging and kidnapping isn't uncommon on the streets of Panama. In such a situation, hand over all your possessions immediately and do not resist. Avoid poorly lit and deserted areas.

Although there haven't been any terrorist attacks in Panama's recent history, they shouldn't be ruled out so remain vigilant at all times.

Scams are very common in Panama, so double check your change, never pay anything upfront and negotiate everything in advance. Watch out for people sending you free drinks and never leave your drink unattended.

Traveling to Panama is generally safe for solo women, but bear in mind that you should generally hike and explore in a company, never alone. Stay away from poorly lit and deserted streets and areas and from people that are visibly intoxicated or under the influence

So... How Safe Is Panama Really?

Generally, Panama is a safe country to visit.

When you visit Panama, you can count on friendly people offering you help with anything you need, especially in rural areas.

However, crime rates are high, and it’s not just the petty crime that’s the issue: violent crime is a common issue in Panama, though it’s on its way to getting eradicated.

There are parts of this country that you should definitely avoid such as the border region between Panama and Colombia, (considered to be extraordinarily dangerous due to the presence of Colombian rebel groups and drug traffickers), most of the city of Colon, El Chorrillo neighborhood of Panama City, and Curundu and El Marañón neighborhoods which are poor and crime-ridden areas.

Although at night the main streets and plazas and districts with bars and restaurants are safe, visitors should be more cautious after dark, especially if they’re moving north along Avenida Central towards El Chorillo.

Pick-pocketing and mugging is a common issue in Panama City, so tourists are advised to exercise caution, particularly in crowded areas such as train and bus stations, airports and on busy streets, as well as in public transport.

How Does Panama Compare?