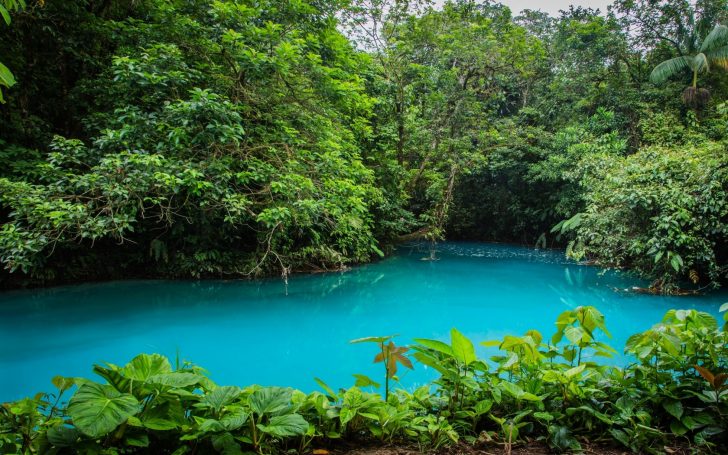 Costa Rica (officially known as the Republic of Costa Rica) is located in Central America.

It’s a small country sharing borders with Nicaragua to the north, Panama to the south, the Pacific Ocean to the west, and the Caribbean Sea to the east.

Costa Rica is known for being “the happiest nation in the world” as well as “the greenest country in the world”, which is no surprise considering its abundance of world-renowned beaches, both in the Pacific Ocean and the Caribbean Sea, its bewilderingly diverse culture, flora, fauna, and landscapes.

It also boasts several active volcanoes that can be visited within a safe distance.

It is, also, no wonder that Costa Rica is considered to be the most expensive country in Central America and perhaps in entire Latin America.

Everything there is to enjoy in this country, like wine, chocolate, coffee, national parks, everything is expensive compared to prices in Western Europe and North America.

But add to this its gorgeous beaches, tropical forests, high mountains, and marshy lowlands and you have got yourself a land worth the price.

Costa Rica is generally safe, but you should take precaution on the streets of major cities, and after dark. Be wary of pickpockets and bag snatching and keep your valuables safely by your side. Never carry all your money in one place or leave your valuables in plain sight in a car or at a beach when swimming.

Public transport is generally safe in Costa Rica, but do be careful on buses and bus stops - especially those destined for San Jose - since that's where pickpockets and petty thieves operate. Be especially careful not to fall asleep, because you may wake up and find your valuables stolen.

Pickpockets are a common occurrence on the streets of Costa Rica and tourists are recommended to remain vigilant at all times when on the street. Make sure you don't flash your valuable possessions on the street, be careful when withdrawing money from ATMs and of course, keep all your valuables in a safe place in your accommodation or safely by your side.

As for natural disasters, the most common ones are earthquakes. Earthquakes are quite common in Costa Rica: there are small ones that occur daily and then there are strong earth tremors occurring a few times a year. The deadliest earthquake occurred in 2009, claiming 34 lives. Other minor natural threats come in the form of volcanic eruptions, tsunamis and occasional hurricanes.

Mugging is not altogether uncommon on the streets of Costa Rica. In such a situation, hand over all your possessions immediately and do not resist. Avoid poorly lit and deserted areas.

Although there haven't been any terrorist attacks in Costa Rica's recent history, they shouldn't be ruled out so remain vigilant at all times.

Scams are very common in Costa Rica, so double check your change, never pay anything upfront and negotiate everything in advance. Watch out for the known robbery scheme where someone slashes your tires and when you stop to fix the flat tire, one or two "friendly" people stop to help you with that all the while picking your pockets or just simply grabbing everything you own and running away.

Traveling to Costa Rica is generally safe for solo women, but bear in mind that you should always hike in company, never alone, and the same applies for exploring any city. Stay away from poorly lit and deserted streets and areas and from people that are visibly intoxicated or under the influence.

So... How Safe Is Costa Rica Really?

However, there are dangers that come with such destinations – mostly in the form of pickpockets and petty theft such as purse snatching, armed robberies, and carjacking, so tourists should exercise caution.

In larger cities, even muggings and robberies at gun or knifepoint happen, so be careful when walking alone along the streets of Costa Rica.

They quickly become deserted in the evening after the public buses stop circulating, so it can be extremely dangerous to walk around San Jose after dark.

It is advised for tourists to take a taxi in such situations instead of walking.

Visitors are advised to use common sense and not leave valuables in plain sight in a car, or at the beach when going into the water.

Another issue to bear in mind in Costa Rica is the traffic: watch out when crossing the street since pedestrians, in general, do not have the right of way.

Roads in big cities may be safe but in rural areas, they tend to have potholes, so be careful when driving.

Driving at night is not recommended.

What you should watch out for are the strong currents and rip-tides in some areas at Costa Rica’s coasts.

Although Costa Rica has some of the best beaches in the world, you should bear in mind that there are no signs marking unsafe beaches due to riptides nor are their lifeguards, so follow local advice on where it is safe to go swimming.

It would be best to learn how to swim out of rip tides, in case of emergency.

How Does Costa Rica Compare?