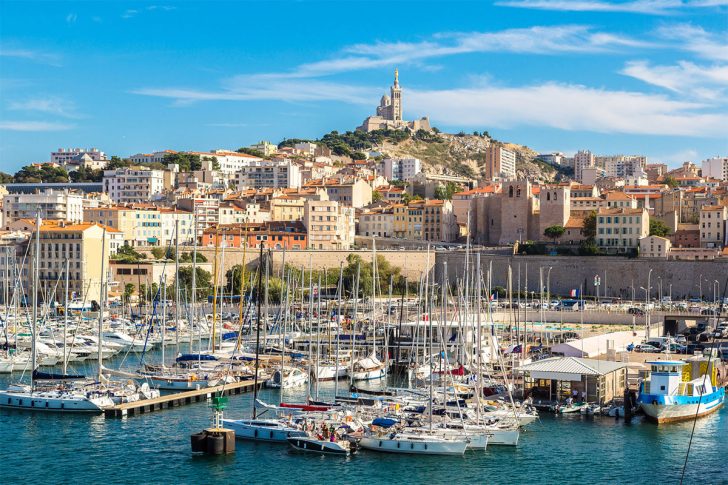 Considering its tradition and complex history that dates back to 600 BC when it was founded by Greek mariners, Marseille is a top destination for tourists from all over the world.

It is the second-largest city in France and the largest one in the Mediterranean.

The city is a mixture of various nationalities since the people living there have different ethnic backgrounds because a lot of Italians and Spanish having immigrated there after the Second World War.

Tourists are attracted by its markets, sea, old harbor and the Panier area, which is the oldest part of the city.

The police are doing its best to protect both the citizens and tourists in Marseille, and it is highly-effective, but tourists still might be a target for pickpockets on the city’s streets. It is a safe city with certain parts to be avoided. Street crime is very frequent, so keep an eye on your passport, credit cards, and other valuables and carry your bag across your body rather than on your shoulder.

Public transport might be risky in Marseille. Motorway journeys are usually trouble-free, but when the parking is in question, always park your car in a public area with lights. Using mobile phones with headsets or earpieces when driving is forbidden. France is often disrupted by strikes which can affect transport. Tourists should be careful of rogue taxi drivers who raise the price during the ride.

Pickpocket-related risk in the center of Marseille is common and pickpockets usually work in a gang. While you are distracted by one of them, the other gets your bag. Restaurants and bars are also common places where thieves operate.

When natural hazards are in question, the risk is low in Marseille, as well as in the whole of France. There might be some avalanche risks in the Alps and some forest fires during the summer months, especially along the Mediterranean coast. Tourists need to follow the advice of French Authorities in case they need to evacuate areas and close roads for safety reasons.

The chances of being mugged or kidnapped in Marseille are medium since some dangerous areas need to be avoided, especially at night. There have been reports about several victims of serious assault on the RER line B and on RER line D, which serves the Stade de France.

The possibility of the terrorist attack in Marseille and the whole of France exists and the risk is very high, due to ongoing threats to France by Islamist terrorist groups. Tourists need to be watchful in public and follow the advice of local French authorities. Bear in mind that there have been several high profile terrorist attacks in France.

Common scams used to obtain money from tourists are fake petitions, 3 card trick, and gold ring tricks. As in any other big city, thieves will do everything to try to fool you to rob you. Scammers usually operate on the Paris underground and RER lines.

Even though it is believed that Marseille is generally very safe for women travelers, women should remain vigilant as in any other large city in the world. France is one of the most visited tourist destinations on the planet and a safe country for travel. Women traveling solo will not have any trouble getting around France by train, bus or rental car. However, there is always a possibility that young men, that are not respectful, harass a woman traveling alone.

So... How Safe Is Marseille Really?

Marseille is the city that is worth visiting no matter how dangerous it might be.

If you are an experienced traveler and a vigilant person, you do not need to worry about your safety when coming here.

The good thing is that muggings and pickpockets have decreased in the city center recently, and police forces are effective in fighting against criminals.

However, you should avoid carrying valuables and watch your surroundings.

Also, avoid the area around Boulevard Michelet due to a large number of prostitutes.

How Does Marseille Compare?