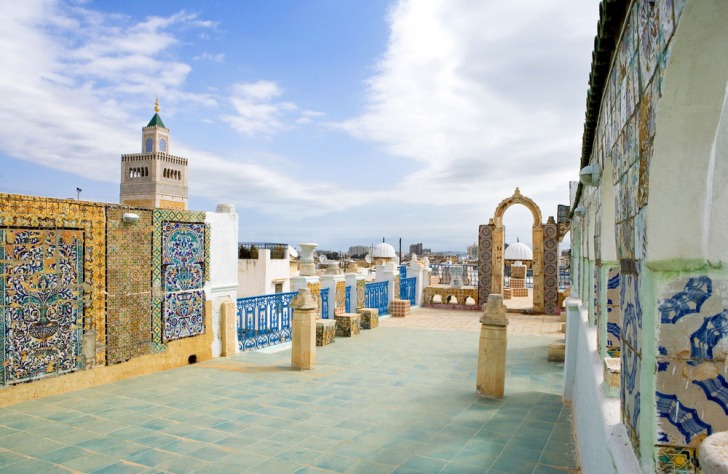 Tunisia - safety as a country

Tunis is not big and compact city on the Mediterranean coast.

There isn’t much in the way of must-see attractions, but the Roman ruins of Carthage are easily accessed from here and attract many tourists here.

The city is bilingual – French and Arabic are common languages here.

Zitouna Mosque is the largest mosque in Tunisia and a famous landmark, this Aghlabite mosque dates back to the 8th century, although the distinctive square minaret is a much later 19th-century addition.

Take a walking tour of the ancient buildings, mosques, and gates of the medina is a fascinating event in Tunis.

You can feel safe here if you follow specific rules: do not walk around the city after sunset, do not get drunk, and do not leave things and pockets unattended.

Traveling in local buses is not recommended for tourists: drivers are rough and rarely follow traffic rules. Women may be harassed, and pockets will have to be especially watched. Taxis are safe but make sure you order a licensed service, and the driver has turned on the taximeter. If there is no taximeter, discuss the price of the trip before you sit inside.

Pickpocketing and bag snatching are very common. Be especial cautioned in big markets, the coastal areas, beaches, and public transports. Do not leave things unattended.

Tunisia is susceptible to natural disasters, particularly floods, earthquakes, and droughts. In the past couple of years, various regions of Tunisia have been suffering from flooding.

The chances of getting mugged or kidnapped are high only around the border with Libya, and there are areas that are best avoided, such as poorly lit and deserted areas in the big cities in Tunisia, the same goes for Tunis.

The country is noted as having a high risk of terrorist attacks; therefore, in Tunisia, the risk of terrorism also remains. One should be especially careful when visiting religious places, as they are often the target for terror.

Petty fraud and deception can wait for tourists at every step. Do not buy excursions and entrance tickets from street vendors. Avoid random purchases and cheap things that may turn out to be fake.

Women can freely travel around the city if they use common sense and do not appear at night in the city alone. It is best to wear modest clothes and not ride on public transport.

So... How Safe Is Tunis Really?

Tunisia is not the safest city.

Behind the scenes, the streets here even empty after 8 pm.

Only beggars and petty thieves remain on the streets.

They will try to deceive tourists here at every step: starting from inflated prices for any purchase to fake tickets for excursions and attractions.

Be careful with those who offer or ask you for help: the Tunisians themselves are polite and prefer to bypass tourists.

If you are persistently pestering on the street with conversations, it would be best to get away from them.

The city speaks French and Arabic, and if you hear that you are being addressed in English, most likely it will turn out to be a scammer.

The city has a relatively high unemployment rate so that beggars can be found quite a lot.

They are usually harmless, but watch out for your pockets – they can easily be cleaned if you are gape.

Be careful when asking for advice from sellers or taxi drivers – always after that, they will expect a monetary reward from you and insist on it.

Tunis is a conservative city, and women traveling alone should remember about it.

The city obtains more and more rights for women, but you still should prefer modest clothes to avoid condemning your looks and sayings.

How Does Tunis Compare?