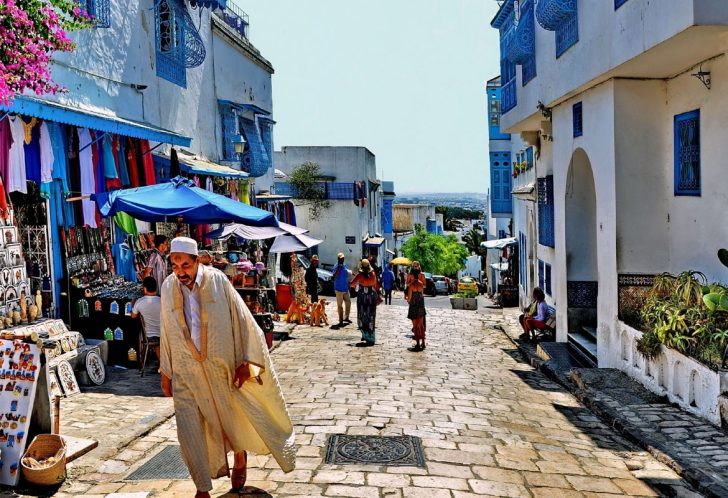 Tunisia officially referred to as the Tunisian Republic is a country located in Northern Africa with a Mediterranean Sea coastline right at the heart of Mediterranean Africa.

Tunisia is located immediately to the south of Italy and Malta and it also shares its borders with Libya to the south-east, and Algeria to the west.

Even though Tunisia has much to offer, this country has lived through a major decline during the recent decades.

Its economy is in major depression, infrastructure decay, and with it, the mass tourism lowering down.

However there are signs of renewal, especially in Tunis, and they’re certainly are many ways to enjoy Tunisia, the first one enjoying your days on the gorgeous Mediterranean beaches.

However, if you’re planning a circuit of Tunisia, it is highly recommended you get a reputable tour guide, since the regions adjacent to the Algerian and Libyan borders are very dangerous to visit, with kidnappings having been reported in this region.

But with that in mind, Tourism is still well developed in Tunisia, although not as much as in other countries like Egypt and Morocco.

Overall, Tunisia is a safe country, but there are extremely high rates of petty crime. You should be vigilant and take all possible precaution measures in order to minimize the risk of something going wrong.

When it comes to transport, it isn't very safe or reliable. You have to be very careful in public transport because there may be thieves lurking around, and sexual harassment toward women is common. Make sure that the taxi drivers aren't ripping you off under the excuse that their meters aren't working.

Tunisia is susceptible to natural disasters, particularly floods, earthquakes, and droughts. In the past couple of years, various regions of Tunisia have been suffering from flooding.

The chances of getting mugged or kidnapped are high around the border with Libya, and there are areas that are best avoided, such as poorly lit and deserted areas in the big cities.

Terrorists are likely to try and attack in Tunisia. Authority in Tunisia is alert at all times in Tunis and other regions of Tunisia. You should remain aware of your surroundings at all times, avoid protests and public gatherings and festivals.

Watch out for street vendors trying to rip you off and overcharge for their service, double-check the authenticity of everything you want to buy as well as the change you receive and negotiate everything in advance.

Tunisia is not the safest choice for female solo travelers. Sexual assaults do occur occasionally, and women, in general, tend to attract unwanted attention.

So... How Safe Is Tunisia Really?

Tunisia is relatively safe to visit.

It is a country where theft and petty crime is common.

Be very careful with your valuables and keep them in a safe place with you, or better yet, just leave them in your accommodation and only carry enough cash to cover your requirements for that day.

Among dangers you can encounter on the streets of Tunisia is the harassment of women and of the LGBT population.

LGBT are not welcome here and homosexuality is punishable by law and illegal.

Members of the LGBT community are advised to stay out of Tunisia, though in the past couple of years more and more young people are gaining some understanding of this community and are becoming more accepting of them.

Men in Tunisia tend to verbally harass western women on the streets, due to their image of western women they get over the media.

They get truly stunned when they ask female tourists to kiss them, and they don’t do it.

If you receive unwanted attention, just say ‘Harem Alek‘, which, in Arabic means ‘shame on you‘.

This usually works quite well.

Another issue you should be very aware of is that traveling to within 10km of the Tunisia-Libya border is strongly advised against, as well as traveling south of El Borma.

Just generally be careful when moving around Tunisia, since there have been attacks carried out on the country by Islamic extremists recently.

How Does Tunisia Compare?