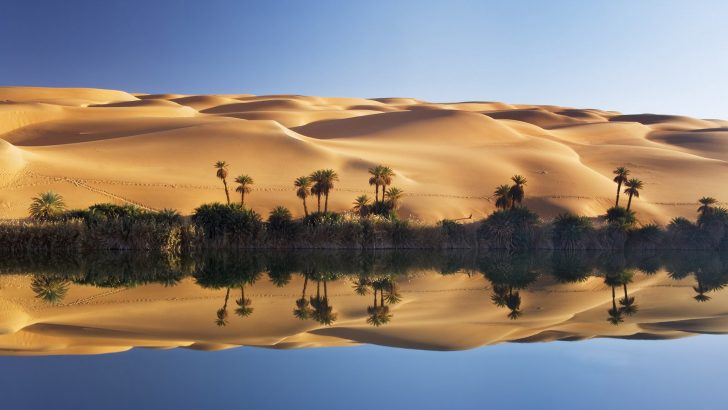 Libya is a country located in North Africa, with a coastline along the Mediterranean Sea and in between Egypt to the east and Tunisia to the west.

It also shares borders with Algeria, Chad, Niger, and Sudan.

Geographically, it isn’t too diverse as more than 90% of the country is covered in desert or semidesert.

Culturally, you can definitely broaden your views by visiting Libya: you can see the Leptis Magna, a prominent city of the Roman Empire whose ruins are located in Al Khums, on the coast where the Wadi Lebda meets the sea.

Leptis Magna is considered to be one of the most spectacular Roman ruins in the Mediterranean.

You can also visit Cyrene, an ancient colony that is now an archeological site near the village of present-day Shahhat.

Located in the northern part of Libya, and surrounded by mountains, it’s the location where the oldest “love Symbol” in the world was found.

Libya isn't safe and many governments are advising their citizens against traveling to Libya because of the current conflict following the bloody war to oust the Gadaffi dictatorship. This country is dangerous and if you're currently in Libya, make plans to leave as soon as the opportunity presents itself.

The ongoing tumultuous situation makes it difficult to travel at night. Even though road conditions aren't too bad in Libya, but driving standards are poor with factors that complicate traffic additionally, like the wind-blown sand that reduces visibility.

Pickpockets are active in Libya, and both petty and violent crime is rife. Avoid carrying too much cash and keep in mind that expensive watches, jewelry, and cameras will make you look like an easy target for pickpockets and opportunists.

There aren't many natural disasters that affect Libya, apart from occasional earthquakes.

Violent confrontations like muggings and robberies are on the rise lately, so it is recommended that you take extra care on the streets of Libya, avoid dark streets and deserted areas. Bear in mind that risks increase after dark.

Terrorists are very likely to try and carry out attacks in Libya. The biggest threat is coming from the extremist groups including Daesh that are responsible for the majority of attacks.

There are many scams in Libya as well as scammers trying to take advantage of travelers. Be wary of people trying to distract you in order to steal from you and of taxi drivers overcharging you for a ride. We advise you to be extremely careful when handling money and around ATMs.

Libya is definitely not safe for solo female travelers. They are advised, if it is absolutely necessary that they leave their accommodation at night, to go out accompanied by someone. Be sure to avoid remote streets, both during day and night, and do not flash your belongings or handle money in public.

So... How Safe Is Libya Really?

In fact, many governments are explicit in advising travelers against all travel to Libya due to serious political and social turmoil and instability there caused by the ongoing civil war following their president’s overthrow.

Armed militia groups persist in their presence in many cities and areas, which can often be lethal.

If you’re in Libya currently, stay away from public gatherings, demonstrations that can turn deadly and areas where militia groups tend to get involved in conflicts and make plans to leave Libya as soon as the opportunity presents itself.

Driving after dark is extremely dangerous in Libya, especially in rural areas, as there’s a Night driving high risk of accidents: rural roads are common without any traffic signs at all and aren’t even marked, making it difficult to stay in lane.

Also, other drivers tend to drive cars with specific headlights which makes it difficult to see the road and oncoming traffic.

Drivers are commonly reckless and speeding for no reason at all, and camels have been known to cross the roads at night.

You should also know that members of the LGBTQ community are in extreme danger in Libya.

Homosexuality is illegal here, and those engaging in homosexual acts can easily be executed or tortured.

Sharia law is in force here, so gay people and lesbian women should definitely stay away from this country.

How Does Libya Compare?