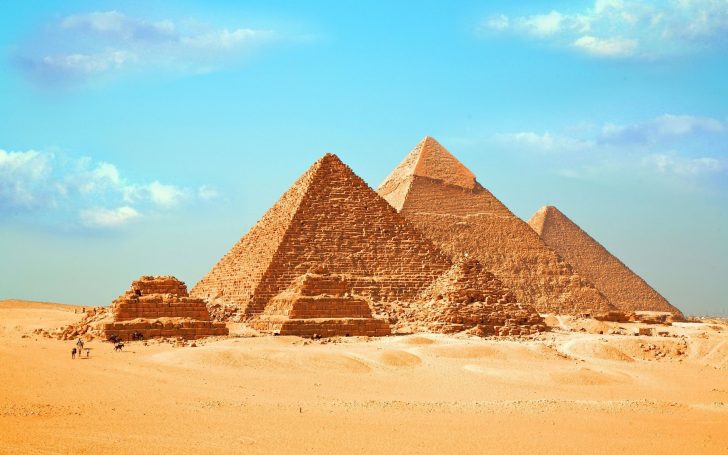 Egypt is a transcontinental country located in North Africa extending into Asia due to it holding the Sinai Peninsula.

Egypt shares its borders with Israel and the Gaza Strip to the north-east, Sudan to the south and Libya to the west.

The country is also surrounded by Mediterranean and Red Seas and the gorgeous Nile river isn’t only a tourist attraction: it is an important economic factor for Egypt as well as its fertile well-watered valley.

If you’re planning on visiting Egypt, you already know that it is the cradle of the ancient Egyptian civilization.

You can enrich your Egyptian experience by visiting its temples, hieroglyphs, mummies, and pyramids.

Its capital Cairo offers a unique view into original Egyptian feel with landmarks like Muhammad Ali Mosque and the Egyptian Museum.

This country keeps surprising tourists and travelers by offering them much more than they expected which why it is still one of the most popular tourist destinations in the world.

Given the recent events, you might say that the situation in Egypt isn’t the safest for a visit, but it a safe country when it comes to violence and serious crimes. Still, you should exercise vigilance at every step.

Transport is not Egypt’s strong point either. You can count of poorly maintained roads, and reckless drivers with little concern about other people’s safety. There have also been reports of assault happening in microbuses. Use trains as they are the safest option.

Pickpockets and purse snatching are the norm in Egypt, especially in crowded places, around tourist landmarks and on the metro, train stations or airport. Be very careful and keep your belongings tightly by your side.

Egypt is located in a seismically active zone, with earthquakes that cause severe damage. The last major one was in 1996. Also common are the sand storms that occur between March and May every year.

Kidnappings do occur in more isolated areas, but given that these areas have now been backed up with extra security due to terrorist attacks, this shouldn’t be too big of a concern. When it comes to mugging, it exists in the form of carjacking, with muggers usually holding some kind of weapon to get you to leave your car. If you find yourself in such a situation – do not resist. These people are usually only after your car and don’t plan on hurting you.

Terrorism is one of the biggest concerns for tourists. Terrorists are likely to try and carry out attacks, and the main threat comes from the extremists linked to Daesh-Sinai. Remain vigilant at all times.

Scams are Egypt’s biggest problem. There is so many of them that they cannot all be listed, but to name a few most prominent ones – never enter a taxi without negotiating the price first as they may and will overcharge you ridiculously; if you want to enter a museum, you might get stopped by someone telling you that you have to wait for the museum to open, and that you can enter their shop and have some tea while you wait – this is a scheme to pressure you into buying something in their store; at amusement parks, don’t trust people that act like your friends as they often befriend people and then offer to hold their belongings while they’re on a ride only to disappear the moment you get on the ride.

Many women have traveled safely to Egypt, without having any problems. However, many women will have a problem with being cat-called on the streets, while they might find whistles and comments directed at them offensive. Avoid parts of cities that are filled with bars and clubs, and visiting them alone, since there is a higher chance of running into intoxicated people, and wear clothes that cover your arms, legs and chest in order to minimize the unwanted attention.

So... How Safe Is Egypt Really?

Egypt is generally safe to visit.

You might have problems with petty crime and scams, but that’s the extent of crime in this country.

Pickpockets definitely are a problem in Egypt’s major cities, especially in Cairo.

When it comes to violent crime, it is rare, and you shouldn’t worry too much about being mugged or robbed.

If you do end up in such a situation, don’t hesitate to yell “Harami” (which means criminal) and chasing the person who robbed you.

People on the streets will probably jump to your aid.

However, the biggest problems in Egypt are scams.

Scams are virtually everywhere around you in Egypt.

You will cross paths with Egyptians who starts a conversation with you in Cairo and Luxor, wanting to befriend you and show you around and then asking money for their services.

Basically, whatever the locals tell you, take it with a grain of salt.

And if it sounds too good to be true, it probably is

The biggest concern for the travelers is terrorism that has recently been occurring in this country.

However, you shouldn’t panic or delay your trip to Egypt as the odds of actually being affected by terrorism or low, and the areas that might be a reason for skepticism are backed up with extra security.

You can also see police officers armed with AK-47s patrolling and riding on camels in the Giza plateau, ensuring safety to tourists that come to see the crown of Egypt.