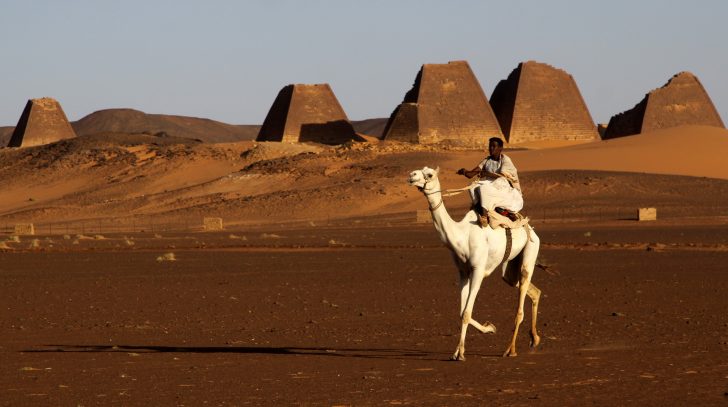 Sudan is African third largest country and sixteenth largest in the world.

Traveling to Sudan has its challenges and isn’t entirely safe, and apart from all this – it isn’t easy to get in, but if you do manage to, and you don’t go to the dangerous areas of the country, there are chances you will actually have a great time.

It may come as a surprise that the Sudanese people are very warm and friendly and if you’re one of those travelers that don’t like feeling too touristy, you will be happy as you can visit some awesome tourist attractions without even seeing another tourist.

Sudan is as a geographically diverse country: if you go to its northern parts, you can see a splendid view of the Nile cutting through the eastern edge of the Sahara: the Nubian Desert, the remains of the ancient kingdoms of Kush and Meroe, and the land of the Seti.

You can also see magnificent plantations and crops of fava beans, dates, tomatoes, and onions.

If you go to East and West, expect mountains, while the rest of the country is covered in savannahs.

Sudan, overall, isn't a safe destination. It is considered to be very risky and many governments advise their citizens not to travel there. If you are already there, plan on returning as soon as the opportunity presents itself. It's a country of great conflicts and dangerous political turmoil.

Transport in Sudan is troubling, to say the least, starting with air traffic. With the lack of planes, you can count on delays and cancellations and, in general, tourists are advised to stay away from Sudan Airways. Entering Sudan altogether is a problem, since crossing its highly militarized borders comes with a lot of problems. Sudan's southern border with South Sudan is extremely dangerous. Going by bus is unreliable and Sudanese buses are sometimes kept in very poor conditions.

Pickpockets do exist and their activity has been on the rise during the past couple of years. Thefts of phones, bags, and pickpocketing are all common in Sudan. Watch your things or leave them in your accommodation. Never let your guard down, especially not in public places, like street cafes, where pickpockets work in pairs: one distracts you while the other one steals.

As for natural disasters, droughts, desertification, and floods are known for hitting Sudan commonly, of course, apart from the war-inflicted troubles that keep troubling this country, like food insecurities, conflicts and displacement.

Muggings and kidnappings do happen, so be extremely careful and avoid suspicious areas. Do not accept drinks from strangers and bear in mind that risks increase after dark.

Terrorists are likely to try and carry out attacks in Sudan. Terrorist attacks, as well as kidnappings, are extremely likely in the Darfur region. Do not venture to this region and be aware of your surroundings at all times.

There is a great risk of being scammed in Sudan. Be wary of people posing as police/army to get bribes from foreigners. If you are pulled over, be courteous - do not make a scene, pay what is asked and then report it at the next police station.

Sudan is relatively safe for a solo woman, as long as you dress and act appropriately for an Islamic country and you respect their laws and religion. Definitely avoid entering public transport alone or finding yourself in crowded areas. Many western women have had problems with being harassed and even sexually assaulted.

So... How Safe Is Sudan Really?

If you’re planning on going to Sudan, you should know that tourists are strongly discouraged from traveling to the Darfur region.

It is dangerous here and the conflict in the Darfur region that is publically well-covered is still taking place.

Apart from this, when South Sudan was still part of Suda, Sudan ended a 40-year civil war between the central government based in Khartoum and non-Muslim separatist groups from the South, and the relationship between the two countries after the independence of South Sudan is strained and tense.

As for crime, muggings and theft are common here but foreigners are generally protected by the locals who will do their best to make you feel safe in their country.

Violent crime does occur, as does petty crime against foreigners, and it has been on the rise during the last couple of years, in the form of purse snatching, pickpocketing, and theft of phones and other devices.

Be on the lookout, as thieves tend to work in an organization and operate in pairs – one distracts you while the other one steals your stuff.

Members of the LGBTQ community should rethink visiting Sudan.

This is a country where LGBT members are discriminated against, arrested, refused service and attacked, and can even be executed by the government.

Vigilantes have attacked them before, while the police stay silent to these crimes and simply turn a blind eye.

How Does Sudan Compare?