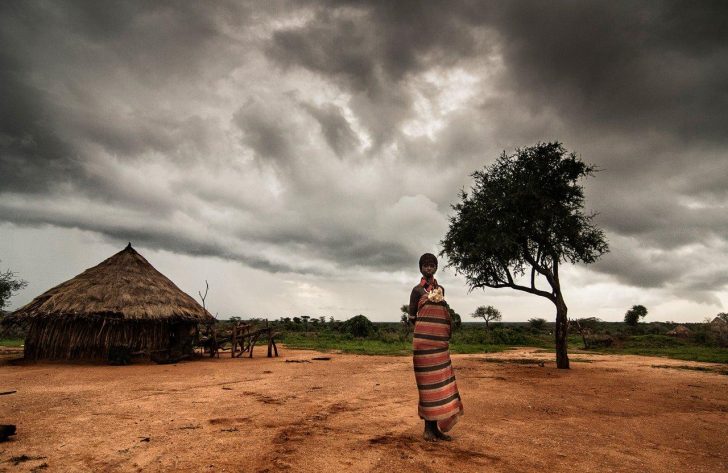 The second most populous nation in the entire African continent, Ethiopia, is located in the Horn of Africa and it’s sharing its borders with bordered by Eritrea to the north, Djibouti to the northeast, Somalia to the east, Kenya to the south, and Sudan and South Sudan to the west.

The most interesting fact about Ethiopia is that it has an enormous religious value, being the second-oldest official Christian nation in the world after Armenia and the place for the first Hijra (615 AD) in Islamic history.

It is also the oldest independent country in Africa.

Apart from this religious heritage, Ethiopia has a long history and has persisted through many difficult times, which left this country with a bunch of historic sites, among which are the towns of Axum, Gondar, Harar, and the rock churches of Lalibela and Gheralta.

Apart from this, you can count on many attractions and a plethora of activities you can enjoy like rafting and exploring the country’s mountains, lakes, waterfalls, deserts, etc.

Generally speaking, although security in Ethiopia is sometimes questionable, crime in Ethiopia isn’t as bad as you would expect. Act as you would anywhere else in Africa: apply all possible precaution measures and remain alert to any crime.

Transport in Ethiopia is risky and tourists should be cautious at all times, especially when traveling on roads in Ethiopia. There have been many incidents of highway robberies and carjacking by armed bandits outside urban areas, often resulting in violence. Be wary of other motorists warning you of a mechanical problem or loose tire, as it may just be a ploy to get you to stop the vehicle.

Like in the rest on Africa, pickpockets are widespread in Ethiopia and made this activity into an art. It is the usual crime that tourists will experience, and if they face any inconvenience in African countries, it will most likely be related to petty crime. Also common are the "snatch and run" thefts, both from tourists on the streets and from occupied vehicles in the capital, Addis Ababa.

The most devastating natural disaster in Ethiopia is drought. By the end of May 2008, millions faced hunger in eastern Ethiopia due to a severe drought that led to crops failing and food prices soaring. Ethiopia was hit by two successive years with extremely small amounts of rain, causing tremendous droughts.

When it comes to violent crime, Ethiopia is more or less okay. All African nations hold some degree of risk for tourists, but after you spend some time in it, you quickly learn how to act and where. Avoid poorly lit and deserted areas and wandering around major cities after dark.

Terrorists are likely to try and carry out attacks in Ethiopia. The main threat comes from the terrorist group Al-Shabaab which, although based in Somalia, poses a threat across the entire East African region. The group continues to link attacks in the region to Ethiopia’s military presence in Somalia as part of an African Union peacekeeping mission. Remain aware of your surroundings at all times.

Bear in mind that taxi drivers may try to overcharge you, so always agree on the price before getting in, and avoid getting into unlicensed cabs. Always check your change twice, and agree on everything beforehand. There is a common scam performed by motorists, warning drivers of a mechanical problem or a flat tire, trying to get them to stop their vehicle.

If you are a female solo traveler, you are advised to reject rides from strangers, or taxi drivers who appear unlicensed. Be sure to avoid remote streets, both during day and night, and do not flash your belongings or handle money in public. Stay out of the streets at night and be vigilant for any possible dangers at all times.

So... How Safe Is Ethiopia Really?

Though like anywhere in Africa, it is still very important to remain vigilant at all times, as far as crime goes, Ethiopia is not that dangerous of a country.

Compared to Kenya, South Africa and some other countries in Africa, Ethiopia actually has relatively low crime rates.

However, it is still highly advised not to venture to the eastern parts of the country beyond the city of Harar, as Somali separatist groups occasionally launch guerilla attacks there.

When it comes to robberies and other forms of violent crimes, they do not represent a major problem in the cities and towns of this country.

However, the places where you should be cautious are roads in Ethiopia, as there have been many reports of highway robberies, carjackings, armed robberies, and similar occurrences.

If you must travel outside major towns, do it during daylight and if at all possible, travel in convoys.

An issue to be aware of is the fact that outside of Addis, you will probably run into children asking for money, usually greeting you with a: “Hello money”.

A common scam is them asking you to buy them a dictionary for school and conveniently, they cost up to $50 each in the overpriced bookshops.

You should know that this is a scam.

As awful as you may feel ignoring them, know that these are all lies to try and make you give them money that they might spend on buying something that isn’t a life necessity.

Ethiopia is a socialized state and all of the life necessities are provided for them, and while these children are poor, they do have free education, housing, clothing, and meals and are probably just trying to make some extra money.

The one thing you can give them and have no negative repercussions is food.

How Does Ethiopia Compare?