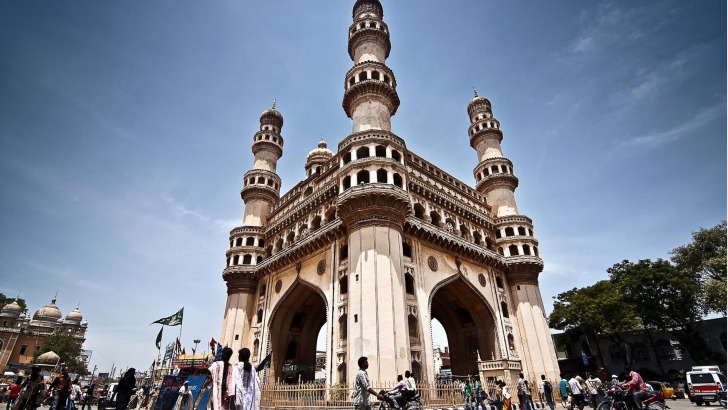 Hyderabad is the capital of Telangana in Southern India.

Many find Hyderabad one of the best places in India to live: it’s very affordable and the living here is truly easy.

It is located on the banks of the Musi River and the Deccan Plateau.

Hyderabad and Secunderabad are the so-called “twin cities” but both cities have now evolved to the point where they have become one big metropolis.

Hyderabad boasts and extremely colorful and diverse culture: one of the few places in South India where people can speak Hindi just as well as the regional dialects.

There are people of all religions in the city and the people are mostly open-minded.

Generally speaking, Hyderabad can be considered a safe city: but while some parts are very safe, the city still has its dangers. You better apply all possible precautious measures, just in case you stumble upon the latter.

Be wary of pickpockets in public transport, and taxi drivers (as well as tuk-tuk drivers) trying to rip you off. Be especially careful in the overnight buses or trains. Keep in mind that driving is somewhat dangerous because India follows the left-hand driving system.

There are some natural disasters in Hyderabad, but the most common one is flooding. It has been recently battered by frequent downpours.

Muggings and kidnappings aren't at all common in Hyderabad, especially not towards foreigners. Still, follow your common sense and avoid deserted and poorly lit areas.

India keeps being targeted by terrorists so there is a risk of them trying to attack Hyderabad. The last ones are known as "The 2013 Hyderabad blasts".

Scams are an issue in most cities in India. In Hyderabad, you'll probably get scammed if you're a tourist, too. There are many taxi scams with taxi drivers convincing you to take other accommodation, as well as those where vendors give you less change than they should. Whatever service anyone offers you - you find out how much it costs first, because they will try to sell everything.

Sexual assaults are on the rise in Hyderabad, and it is not the safest idea for women to travel alone in this country, whether by day or night. Always strive to be accompanied by someone when outside. Move-in groups and avoid poorly lit and deserted streets.

So... How Safe Is Hyderabad Really?

Hyderabad is considered one of the safest cities in India, but it can still get pretty dangerous at times.

The modern Hyderabad is pretty much westernized and women-friendly, but other parts should be avoided.

If you are a new driver in Hyderabad and don’t know the basic nuances of driving in India, you can land yourself in trouble.

Driving in Hyderabad is a pain, people drive in from all directions, pedestrians jump on the road from everywhere, so one needs to have their senses alert all the time.

Unfortunately, the rule of thumb applies here too: the crime rate in India has gone up and a crime against women is increasing every day, which means you can’t be too carefree.

Petty theft does exist but it is more prominent in areas frequented by tourists.

Keep in mind that homosexuality is illegal in India under a colonial-era law, with penalties of imprisonment or a fine.

The law that is still in force has been used for years to harass the LGBT community.

How Does Hyderabad Compare?