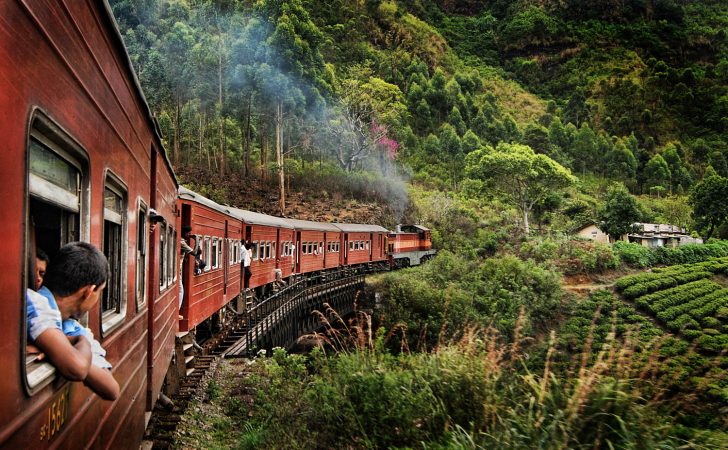 Sri Lanka, formerly known as Ceylon, is an island located in Southern Asia.

It’s actually an island country in the Indian Ocean, south of India.

Sri Lanka is home to numerous cultures and languages.

The majority of the population is from the Sinhalese ethnicity, and much of the territory of Sri Lanka is inhabited by the Sinhalese people, while a large minority of Tamils, who have also played a significant role in the island’s history, are mostly located on the north of the island.

Christians in both groups are recent converts who have kept the traditional culture, though there are all kinds of religions here: Islam, Buddhism, Hinduism, etc.

Sri Lanka offers such a colorful specter of friendly people, cultural heritage, gorgeous beaches, huge cities with loud streets packed with people, markets, children, streetcars, and millions of treats characteristic to this part of the Asian continent, that it makes this country a perfect place to start exploring this region of Asia.

Sri Lanka is generally a safe country to visit. It is a country where you are unlikely to encounter violence, but you should be careful when it comes to petty crime because its rate is high. However, it is still filled with tourists, and if you venture to this country you are likely to have a smooth trip with no incidents.

As mentioned, some taxis do not have meters so make sure you negotiate the price before entering the vehicle. It is relatively safe to take tuk-tuks at night, just be careful that you don't get ripped off.

There is a great risk of pickpockets. In this country, you definitely shouldn't let your guard down. Avoid carrying your belongings with you, and if you do, never carry anything in your pocket or a purse.

The greatest natural threat in Sri Lanka is flooding, tsunamis and sea level rises. These often generate disasters. The biggest tragedy caused by a tsunami in the past decade was in 2004 when the tsunami killed more than 5000 people.

Mugging is relatively rare in Sri Lanka, but it does happen. There have been reports of criminals using knives to cut off tourists' bags. Avoid poorly lit and deserted areas and be wary of people sending you free drinks.

Sri Lankan military conflicts between Tamils and Sinhalese ended in 2009, and since then, there has been peace in this country. Still, you should remain vigilant and avoid military areas and High-Security Zones.

There is a number of scams performed in Sri Lanka, mostly distractions executed in order to separate you from your belongings or take advantage of you in another way. Many taxis do not have meters so be sure to negotiate the price of the ride before entering the vehicle, and do not use your credit card unless it's at established buildings and businesses.There is the common scam when taxi drivers suggest making a short stop to a so-called Spice Garden where they offer you fake Ayurveda medicines and cosmetics.

Sri Lanka is, generally speaking, safe for women travelers. Try avoiding dark alleys, walking alone along with dark, poorly lit or deserted areas, or finding yourself late at night in areas filled with bars or clubs as you might receive some unwanted attention. Apart from that, use your common sense and apply all basic precaution measures.

So... How Safe Is Sri Lanka Really?

Sri Lanka is a safe country to visit! Your biggest problems here are probably going to be scammers and pickpockets, and even pickpockets aren’t that much of a problem.

You should be wary of scammers because everyone will try to trick you into buying something from them.

If you are a first time visitor to Sri Lanka, never say it, though they ask you, and ignore all interactions and unsolicited advice from strangers.

Some of them may offer you help, ask you if you remember them or tell you they work at your guesthouse or hotel.

This is just a way for them to start a conversation with you and trick you into buying something from them.

Then there are transportation scams, like in most countries in this region: tuk-tuk scams are common in Colombo urban area and other larger cities, so be sure to tell the driver where you want to go and always agree on the price beforehand (the price for the whole ride) and check if the driver understood it.

This goes for all other types of transportation, such as taxis.

As for crime, there is some street crime and petty theft, but taking care of your belongings and being vigilant at all times should minimize the risks of something going wrong.

Violent crime is usually not any more serious for tourists in Sri Lanka than anywhere else, though there has been an increase in violent crimes towards tourists in the last couple of years, it is still very rare, though vigilance is recommended.

How Does Sri Lanka Compare?