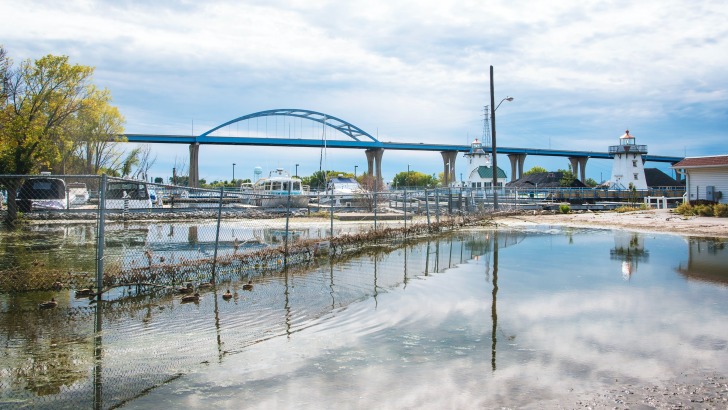 Editor’s Note: This safety review has been written by Julie B. – a local to the area!

I will let her introduce herself, take it away Julie!

Hello, my first name is Julie.

I never felt threatened or robbed by strangers while living in Green Bay most of my life.

That doesn’t mean violent crimes don’t occur, but our local newspaper rated this city as the safest metro area to live in as of 2021.

The U.S. News and World Report rate Green Bay as a metro area where the violent crime risk measures are lower than the rest of the nation. The rating for pickpockets, vandalism, burglary, and other crime ratings varies according to specific neighborhoods. Downtown and metro areas experience more dangers and crimes than rural or suburban areas.

You put yourself at a “medium” risk when by the metro station and downtown. However, the risk lowers in suburban and rural areas (“the outskirts”). Just watch yourself when waiting for your ride and only use transportation that has a reputation of safety.

On the far east or west sides and past Bellevue, Denmark, Ashwaubenon, or other surrounding cities, the risk remains low. It’s in the city center (downtown and metro areas) where the pickpockets might “get you” the most. Other possible medium- to high-risk areas include “restaurant row” (Oneida Street) and near the Packer Stadium.

Tornados often occur in Brown County, but touchdowns don’t usually cause much destruction in downtown Green Bay. Even further out from the city center, you won’t see as much damage as surrounding communities. However, this city does experience frequent severe thunderstorms and blizzards that cause damage and accidents. Still, it seems that the Green Bay climate remains more stable than in rural areas around it. We hardly ever experience earthquakes or volcanoes here.

This falls under the “theft” crime category in most sources. In Green Bay, theft seems to occur higher than for the average U.S. city. A crime map will show you where some of the highest risks for theft would occur. However, I give it a “medium-low” rating based on only visiting the low-crime areas and avoiding the dangerous locations. On the other hand, you might not have a choice but to connect to the downtown Metro station where the long-distance Greyhound buses also park.

A terrorist threat that two students supposedly thought was a “joke” turned into possible criminal charges in 2021. However, Wisconsin, in general, doesn’t have a high religious or political terrorism risk rating. Precautionary guidelines are administered just in case, however. The violent crime including homicide risk grades in Green Bay remains low.

In-person scams probably don’t happen as much as they did before the increase in online identity thefts. Local news does report telephone scams affecting multiple U.S. locations, and Green Bay has received warnings from the Police Department concerning this. If you walk around downtown, you may see a musician playing for money or a panhandler. However, it doesn’t happen often.

Downtown and business districts usually pose a more significant threat to people of any gender, including women. I’d give the rating a “medium” for the metro area, but the risk decreases to “low” further away from the bus station, library, gas stations, stadium, etc.

The annual water report (2021 version) gives you some idea of the risk of waters from streams, lakes, and rivers. However, the Green Bay tap water filters through a local treatment plant, and the risk remains “low” for now. Rumors have it that downtown water may have more pollutants than suburban areas. Many people place filters on their faucets or consume bottled beverages.

Look at the dark green areas of this Crime Grade map to determine which areas have the least amount of crime.

Suppose you arrive on a sunny day when the temperature is at least 70 degrees.

In that case, I recommend either Bay Beach or the Wildlife Sanctuary or the University of Wisconsin Arboretum and Communiversity Park.

Areas by the Packer Stadium might seem less safe, but there’s also quite a bit of security around there as well.

Moreover, you could venture off the land into the Oneida reservation, where the leading Casino is on West Mason Street near Northeastern Wisconsin Technical Institute.

Personally, one place I also feel safe is at Kwik Trip.

There’s one of these convenience stores in just about every neighborhood.

They have a robust camera system and conscientious workers, so I feel secure there.

I visit at least one of these C-stores nearly every day because I’m a delivery driver, so I know.

Placess to Avoid in Green Bay

You might not want to hang out very long near the Green Bay Metro station on University Avenue alone at night.

Day and Harvey Streets nearby aren’t the best neighborhoods either.

These streets are on the East side near downtown.

Other questionable areas include East High School, such as Walnut Street by the Marathon Mart (gas station) and Joannes Park.

However, there is a community cop center on Baird Street that does oversee the area.

However, according to a 2016 Press-Gazette report, Imperial Lane over by Walmart East is the poorest neighborhood.

Here, you may have to watch out for people selling stolen goods.

In these Green Bay locations, you mostly have to watch out for drug dealers, and there is a moderate amount of gang activity.

However, usually, no one bothers you if you’re not socially connected with them and don’t antagonize anyone.

Still, it’s wise to at least take one person with you just in case you plan to travel this area on foot.

Crime seems to happen in the more crowded areas of the city.

However, some places have more security than others too.

Follow these safety tips when traveling to Green Bay and while visiting here:

So... How Safe Is Green Bay Really?

Some reports about how safe Green Bay made seem to contradict one another.

Again, it depends on where you plan to spend your time.

I also remind you a second time that some crowded places in the city have extra security, such as at the Bay Park Square Mall and near the Packer stadium.

However, isolated areas may remain surveyed, such as areas behind trees where people might gather to party, drink and use drugs without anyone seeing them.

That’s often the pattern with homeless people or underage users.

Crime Grade rates the city with a “D+,” which means that this area experiences more crime than the average U.S. city.

However, this doesn’t mean that the city experiences excessive violence, although, the Crime Grade rating is a “C-“.

Other reports indicate that violent crime rates have dropped between 2014-2017.

As of 2020, Green Bay’s total crime rates are about 12 percent lower than the national average.

However, what surprised me is that violent crimes supposedly are as high as 36 percent above the national average according to one source.

According to User Polls

I hear from other people who live here comment about how crime has increased in Green Bay.

Those remarks usually come from individuals at least 40 years old.

It’s because people that age recall when half of the city that now has apartment complexes or homes on it used to be mostly farmland or trees.

Furthermore, I met dozens of people who moved to this location from Milwaukee, Chicago, or Rockford.

Families with children have come here within the past 20-30 years because they have less crime than other metro areas.

However, that may contribute to some crime reports indicating that violence has risen here.

However, according to user polls, about 63 percent of 40 people surveyed feel “pretty safe” here.

That’s how I think.

There’s a crime here, but it “doesn’t impact me much.”

About half of 38 people who responded to this survey also said “police are very visible and responsive.”

Of course, that depends on where you stay.

Cops come fast if you live next to or a few blocks away from the police station.

The same applies to if you don’t live far from one of the hospitals or the fire department.

I also haven’t heard much about neighborhoods that are “so bad” the cops won’t come if called.

The longest I ever remember waiting for the police to arrive is in about 15 minutes.

As far as the danger, again, you should pay attention to crime rating maps to find out which places are “the worst.”

If it’s a concentrated area that receives frequent calls further away from the police station, it might take longer to receive help.

How Does Green Bay Compare?