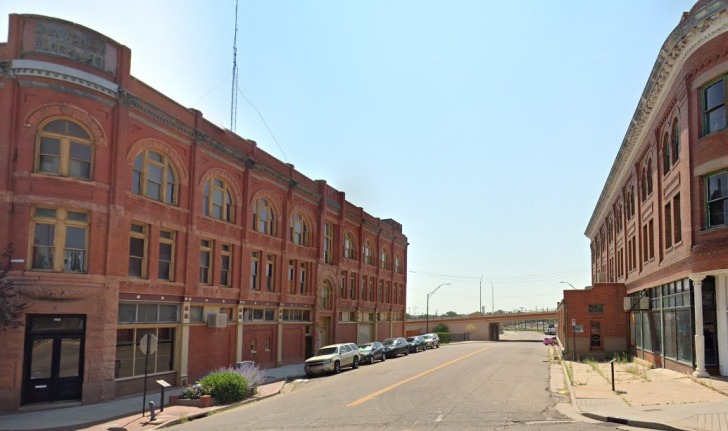 Pueblo, Colorado isn’t a whole lot of what you’d expect in this state.

It’s not nestled into a huge mountain range.

The mountains are way in the distance.

You don’t get large snowfalls here, so there’s no walking in a winter wonderland much of the winter.

You don’t even have the same seasons as other parts of Colorado.

It’s part of what makes Pueblo different or special, depending on how you look at it.

This is a diverse city with the offspring of immigrants brought in to help make steel more than a century ago, making it a milestone location for steel production.

Throughout economic and labor challenges in the 1980s through the early 2000s, the steel industry survived – barely – but is still a critical thread in the fabric of this community.

The city’s culinary claim to fame is the Slopper.

It’s a hamburger/cheeseburger served with a covering of chili sauce, then topped with diced onions.

It doesn’t sound good, it doesn’t even look that good in pictures, but I’m told it’s one of the most amazing dishes you’ll have and you need to at least try one when you visit Pueblo.

Pueblo isn’t a town trying to impress you.

There is a lot to do here, but nothing that will make your jaw drop in amazement, as you might get in Colorado Springs.

It’s one of those cities where you’ll rarely see a crime in one neighborhood, but don’t dare go into “insert neighborhood name here” or you’ll be in danger.

There's a medium risk here. As of 2020, Pueblo ranks as the 21st most dangerous city in America. Normally, I brush off the "lists" because I like to crunch my own data so you can have the best information possible. My jaw dropped at some of the numbers reported in the 2020 Annual Report by the Pueblo Police Department. There are problems here we need to discuss before you visit because it's not so dangerous that you should avoid them altogether.

Pueblo Transit is the bus system around town. There are 12 routes to take. Taxis and rideshares are available too. I'd say there's a medium risk because of the high crime levels and, on top of that, having a car is going to make your experience in Pueblo better.

Here's one thing that shocked me - there were 4047 thefts in Pueblo in 2020. More shocking? Just two were pickpockets. The unfortunate part is that it seems people are more likely to just outright rob you than to pick your pocket. It's a low risk of being pickpocketed, but the potential for it is a higher risk.

Wildfires and flooding are the biggest risks here. This is a dry high desert climate and the comfortable temperatures make for some areas being a tinder box when a fire breaks out. There is also a lot of wind here, so hold on to your hat. Overall, it's low risk compared to other Colorado communities, but during wildfire season be on your toes as the unpredictable fires can quickly lead to an evacuation.

There's a medium risk here. 30% of the 198 robberies were in public places. Again, this is a hit-or-miss community when it comes to crime, but if you do get robbed it's going to be by a very dangerous person.

There's a low risk here. No hard targets are in Pueblo and the next closest city that is a hard target is 45 minutes away in Colorado Springs.

There's a low risk of being scammed and the main scam warnings are the typical ones from almost every community. Again, criminals here would rather just take things from you than go through the hassle of scamming you.

There were 291 cases of sexual assault or another sex offense, so there's a medium risk for women here. It's not a town where you should go out at night (there's not much to do at night anyway) or drive through strange neighborhoods.

No violations in the water were found in the 2021 Annual Water Quality Report. The water has a low risk and actually has won competitions in the past for being some of the best tasting drinking water in the nation.

Safest Places to Visit in Pueblo

The Pueblo Zoo is a family-friendly attraction with plenty of animals, from adorable to spiders.

You can also get behind-the-scenes tours to see the African Painted Dog, African Penguin, American Bison, or Red Panda.

Tickets are $14 for adults and $10 for children; kids 3 and under get free admission.

Pueblo has a lot of great history to see, but it’s spread out in the community.

The Historic Pueblo society lists all the nationally registered historic places on its website.

There are buildings, bridges, and rail cars on the list.

The Rosemont Museum is an elegant look at life in Pueblo in the late 1800s.

The home has been persevered with almost all the original furnishings to make this a truly unique experience.

For those who love the art of flight, you must see the Pueblo Weisbrod Aircraft Museum.

Throughout 85,000 square feet, you can see military, civilian, and space aircraft and artifacts.

Lake Pueblo is an awesome spot to take a dip in the high desert.

If you can make it to Liberty Point Memorial, you’ll get expansive views of the Pueblo region with mountains in the distance.

You can see hawks soaring, wildlife in the grass, and boaters on the lake with overwhelming views of the blue Colorado sky.

Places to Avoid in Pueblo

Crime maps show the south and east sides of town are the most dangerous.

The east side and Bessemer neighborhoods are two you should avoid at all costs.

While the crime is pretty consistent across the area, I did some research and found the majority of hotels in Pueblo are on the far north side of town and in one of the safer areas.

You want to avoid trying too hard to make friends here.

Pueblo is a town of 112,000 people, but it’s also a place where everyone seems to know everyone else and there’s a certain disinterest in anyone who’s not from there.

Nobody will be rude or violent about you being a tourist, they just might look at you oddly wondering why you are in “their” town.

If you get asked what high school you went to, people assume you are a local.

Avoid being out after nightfall if you don’t have a specific reason to be there.

While there are bars and restaurants, it’s not really a town with a lot of nightlife.

You’d have to go to Colorado Springs to do that (and you’d be safer).

Safety Tips for Traveling to Pueblo

So... How Safe Is Pueblo Really?

The dangers in Pueblo are largely connected to gang activity, drug use, and poverty.

Reading through social media posts, some people in their golden years say they’ve never heard or seen a crime in 40 years of living there, other people say they’ve gotten used to the sound of gunfire and it helps them sleep at night (being sarcastic, of course).

Largely, if you don’t go looking for trouble (or drugs) you won’t find it, but there’s always the risk of being caught in the crossfire of a gang fight or being approached by someone desperate for drugs.

This is no different than many large cities, but it’s a bit surprising to have such high crime numbers in this medium-sized city.

Here’s the risk of being a victim of a crime in Pueblo:

The crimes were mostly domestic issues or gang shootings.

This isn’t the safest city in Colorado, and it’s actually one of the more dangerous cities.

People are just trying to survive here and live as good a life as they can, and sometimes get roped into illegal activity.

If you’re looking for a scenic vista with snow-covered mountains nearby to visit, Pueblo isn’t for you.

If you have friends or family here you’re visiting, they’ll be very helpful in telling you the parts to avoid while enjoying the fun parts of this community.

How Does Pueblo Compare?