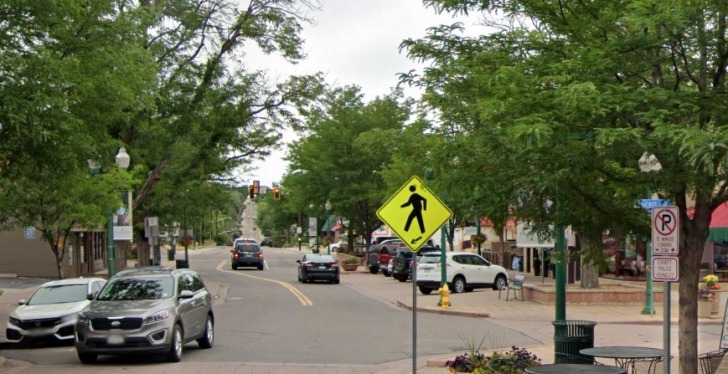 It’s a bedroom community for the greater Denver area and a good base camp for mountain or city adventures.

The Olde Town area is the biggest draw to this community, with unique dining and shopping treasures to be found in a historic atmosphere with the skyline of Denver in the distance.

Arvada (pronounced: “Our-vah-duh” not “Arh-vay-duh”) is now recognized as the first gold strike in the Rocky Mountains, but the founder was too tempted by the promise of riches in California and left his discovery behind.

It is also the former site of a factory that produced the plutonium necessary for nuclear weapons, and some say the ground is radioactive to this day, even though numerous tests have been done saying the levels aren’t dangerous.

Testing is done by regulatory officials every five years to confirm the Rocky Flats National Wildlife Refuge is safe for visitors.

Arvada is just 90 minutes from Breckenridge, one of the most popular ski resort towns for people who live in Denver.

The popularity of this suburb has increased the population, with nearly 125,000 people calling Arvada home.

There's a low overall risk here but a few hot spots of crime to talk through. If there are any complaints about Arvada, it's not the crime, it's the lack of things to do outside the Olde Town area.

The commuter rail line for the Denver metro area now goes to Arvada and there are three stops in town. You can get anywhere in the Denver area, including the airport. Taxis and rideshares are plentiful here. There's low risk with any option.

Thefts are the one crime category above the national average. 16 pickpockets or purse snatching were reported in 2020. While that's still a low risk in a city this large, it's a reminder to keep an eye on your wallet here, especially in the busy Olde Town area. Half of the thefts reported came from car break-ins.

The Denver area gets a little bit of everything. Snowstorms hit in the winter and can be intense. From spring through fall there's a wildfire risk, and Arvada being so close to the mountains, it would be one of the first suburbs impacted. I was actually at the Denver airport one year when a tornado was seen nearby. There's a medium risk because of all of this. Coloradans are very tough and you'll see t-shirts and hats touting "Colorado Strong." Part of the proceeds of these items goes to help people impacted by wildfires.

Denver is a big city and will always be considered a hard target for terrorists as it's also a major transportation hub across the U.S. With that risk comes a greater focus from Homeland Security, so it's not something to worry about. Just be aware and report any suspicious activity you see.

There are a lot of scams reported in Arvada, but they are focused on residents. One thing to be aware of is if a crisis happens, like a shooting death or wildfire impact, sometimes scammers try to make money off your good nature. Make sure any donations you make are going to a reliable source of support, not just some person on the street.

There were 37 rapes in 2020, down 24% from the previous year. That's below the national average. There's no additional risk for women. There's a low risk, but when enjoying a night in Olde Town, be sure to see all of your drinks get poured and keep a napkin on top of it when you aren't drinking so nothing can be slipped into it.

The annual water report shows no violations reported and all categories of contaminants are under the legal levels. There's a low risk.

Safest Places to Visit in Arvada

The most popular place to visit is Olde Town, which has a different vibe during the day than it does at night.

Colorado is a state of microbreweries, so you’ll find plenty of those.

There is also the first craft seltzer business located in Olde Town.

There are 30 restaurants here and plenty of unique boutique shopping.

There’s usually some kind of festival or performance going on here during the weekend, so check the calendar before you go.

There are three golf courses to choose from in Arvada, and the third-largest skate park in the country.

You can also play disc golf at several parks in town.

Arvada has huge outdoor spaces in and around it for those who want to get outdoors.

Coloradans are very active people, so cities are built around this outdoor lifestyle devotion.

Check out the Majestic View Nature Center for the outdoors in an environmentally-safe space.

This is a place so tranquil you don’t even want to speak above a whisper.

You truly get immersed in nature while learning about conservation.

Ralston Creek has a trail that leads you over a suspended cable bridge, marking the spot where gold was first found here in 1850.

Along the way, you’ll see different species of plants, flowers, and trees.

Standley Lake is just outside the Arvada city limits but is where everyone goes to do some boating, fishing, kayaking, or swimming.

Places to Avoid in Arvada

Crime maps show the areas to the east and south are the most dangerous, but those are also the areas getting closer to downtown Denver and where several transportation lines meet.

It’s also where Olde Town is, the busiest part of the city.

There are only a handful of hotels in Arvada.

I believe I counted six, and they are all along the major highways to the east and south.

You won’t find a hotel deep in the city or on the west side (which leads to the foothills).

I’m not telling you to not go there, I want to be clear about that.

This is the site of the former Rocky Flats Plant that made the plutonium for nuclear weapons.

There were three accidents in the history of the plant, none more recently than in the 1970s.

The plant is no longer there and the exact outline of the plant is off-limits.

However, the land around it was turned into a refuge.

Some locals refuse to go there, convinced there’s radioactive material in the land.

Some tests have been inconclusive, while others show no risk for people visiting the land and it is checked every 5 years.

It’s up to you to decide if you want to visit this land, but I wanted to make sure you had the most recent factual information.

I can’t imagine the government would allow a giant open space to visitors if there was any danger due to liability, but you might meet locals who tell you to avoid the area at all costs.

Safety Tips for Traveling to Arvada

So... How Safe Is Arvada Really?

Violent crime is lower than the Colorado average, but property crimes are higher.

With half of the thefts happening to vehicles, be sure to lock all the doors and keep all personal belongings out of the car.

Even a GPS stand could suggest to a thief that a GPS is in the car.

Arvada has had a recent rash of crimes that made headlines, including in the summer of 2021 when a police officer was killed by a man with a semi-automatic shotgun.

A man who tried to help catch the shooter was mistaken as the shooter and was killed by police.

In 2007, there was a shooting at a youth mission center that left two people dead.

Big headline stories like these make Arvada seem like a dangerous community, but those were really random crimes and aren’t indicative of real safety in the community.

However, it’s always good to be prepared by locating the nearest exit when you are visiting a business.

How Does Arvada Compare?