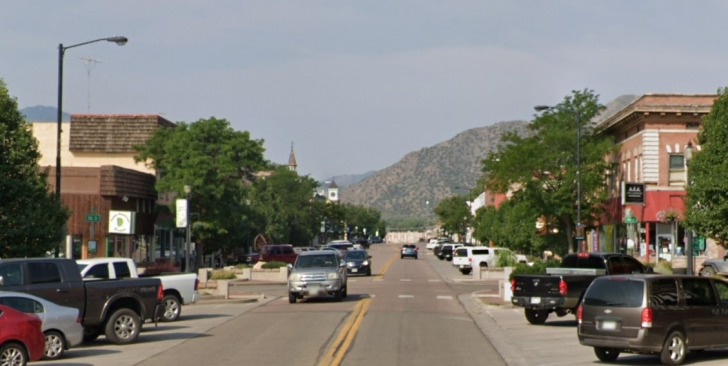 Researching Cañon City, Colorado gave me vertigo many times over.

That’s because it’s right next to the Royal Gorge of Colorado, just 45 miles southeast of Colorado Springs.

The suspension bridge has been in place for almost a century now, with more than 26 million feet walking across it.

This city of 17,000 people is home to natural wonders at every single turn, some really weird prison cells, and a winery built into an Abbey.

There are dinosaurs (Ok, replicas) in a museum and wildlife galore in the surrounding areas.

What makes a trip to Cañon City (pronounced: canyon) a little more special is that in 2013 a wildfire tore through this area, leading to evacuations and one momentous survivor of the fire.

No matter if you are brave enough to walk across the bridge with a near 1000 foot drop, want to stay at the canyon bottom on a train ride, or decide to brave the white water rapids of the Arkansas River, this region could fill two weeks of vacation time if you wanted.

History buffs will get their own thrill without dangling about a gorge too, with the Royal Gorge Mansion available for tours and afternoon tea.

Walking through downtown Cañon City will make you insist you’re still in the Gold Rush era if not for the iPhone in your hand taking dozens of photos.

When I was 10, my best friend came back from summer vacation and told me about her adventure to the Royal Gorge.

I didn’t believe her.

I thought she was making it because it sounded like something you’d only see in the movies.

This truly is a place you have to see to believe.

There's a low overall risk here. Despite the random jail cells you might find here and there, those are more for show than suspects. The crime rates are low and the adrenaline is high here. The only real challenge you have is trying to fit it all into your trip.

To get around the region you have Bustang, a service between 9 cities in the mountain corridors. You can get around Fremont County using Fremont Transit. Taxis are available in town and there are shuttle services to the Royal Gorge. You can also pay for jeep tours of the area. However, it's a really good idea to have a car here. There's low risk with any option you choose unless you're scared of heights and then I'd suggest you avoid going along Skyline Drive.

I'm always encouraged by tourist towns that have no pickpockets or purse snatching, and Cañon City is one of those places. There's a low risk.

The biggest concerns to worry about here are wildfires and flash flooding. Summer storms can also create a lot of lightning, making outdoorsy activities dangerous. Winters aren't as rough as you might think as Cañon City is in a portion of Colorado known as the "banana belt", meaning areas that have less intense conditions than the surrounding region. Because of how dangerous wildfires have become in Colorado, we'll call this a medium risk.

There was just one public robbery in 2020, so there' s a low risk. This is a place where it's easy to get distracted and leave a purse open or a wallet hanging out, so be sure to keep your belongings close to your body and never let your guard down.

There's a low risk here as this small tourist town isn't a hard target for terrorists. The closest city that would be considered a hard target is Colorado Springs.

The scams reported are the typical ones you'd get in any community, but they are focused on residents and not tourists. My only word of caution is to avoid trying to find deals outside of the actual vendors. That's an easy way to get roped into a scam or give away precious credit card information.

Women have no reason to worry about a trip here, and there's a low risk of anything happening to them just because of their gender.

I reviewed the 2021 Water Quality Report from Cañon City, and there are no violations. There's a low risk as all tap water meets or exceeds standards.

Downtown Cañon City is an entire district registered as a National Historic Place.

It’s an authentic turn-of-the-century feel that is preserved right down to the clock tower.

The downtown area has a variety of food choices, some of the cutest boutiques you’ll ever see, and art galleries showcasing the work of locals.

A former prison for women has been turned into the Colorado Prison Museum, with tales of jails from the early days of the 1800s to the technology used now to keep prisoners from escaping.

You can go on a self-guided tour or get a guide to walk you through.

There are even public ghost tours if you want to try to speak to a prison from the great beyond.

You can book any of these tours online.

The Winery at Holy Cross Abbey is popular with wine lovers and this location has beautiful architecture to go with your merlot.

Sip beneath stained glass as you tour this expansive abbey.

I’ve been writing for years and I can’t find words to adequately explain how beautiful this is.

You’ll definitely feel like royalty as you stroll through the arched brick pathways.

The Royal Gorge Mansion isn’t actually at the Gorge, it’s right in the city.

This is where you can explore 6500 feet of early 1900s architecture and enjoy some afternoon tea.

Now let’s get out of town.

You can take Highway 50 to the Royal Gorge Dinosaur Experience.

You’ll see replicas and fossils of dinosaurs, and to kick up the excitement a bit, there are even animatronic dinos waiting to dazzle you.

The Royal Gorge Route Railroad is another way to travel out of town in what is described as “Colorado’s most breathtaking rolling restaurant.”

There are several options to choose from, including a sightseeing train ride or a murder mystery event.

You’ll travel along the bottom of the gorge along the Arkansas River.

On the river, you can do a rafting tour and brave the whitewater rapids.

It gives me an air of nostalgia, as my dad took me on a white water rafting trip when I was 12 and I was so scared to get into the water so he just threw me in.

At Royal Gorge, you can choose from rafting tours that are calm to adrenaline-inducing.

Now let’s get to the Gorge itself.

I popped Dramamine so I can get through this.

Here’s what’s incredible about the bridge in modern times.

The 2013 wildfire caused a gondola to crash and destroyed dozens of buildings in this area.

The bridge stood the disaster and only needed minor repairs.

There’s much more to do than walk across a bridge almost three football fields tall.

There is a rock climbing area, a zipline over the gorge, take a gondola ride high above the gorge, ride the Royal Rush Skycoaster which floats you out over the edge of the gorge, or hang out with me at the Tommy Knocker Playland with two feet on solid ground riding the carousel.

If you love adrenaline rushes, this is definitely the place for you.

There’s one more thing to tell you about, but it’s certainly not all there is in Cañon City.

Skyline Drive is a one-way winding road with drops of hundreds of feet on either side.

If you don’t pass out in the passenger seat, you’ll arrive at some of the most jaw-dropping views of the Gorge region.

Places to Avoid in Cañon City

There aren’t bad parts of town or neighborhoods to avoid.

There’s so much stuff to do as a tourist, you won’t need to be driving around aimless in random neighborhoods looking for something to do.

I know I joke about my fear of heights, but it’s a real thing.

Just looking at some of the videos researching this story gives me vertigo.

Avoid pressuring anyone who is afraid of heights to do anything they don’t want to do.

There’s a difference between being hesitant and being outright scared.

You should also factor in your health conditions before you do anything adrenaline rushing.

A 61-year-old man died from a heart attack after riding the Royal Gorge Zipline.

That said, there is so much to do for people who are scared of heights.

Don’t let that take Cañon City off the trip.

If you and I were traveling together, you could go to the Royal Gorge while I took a train ride and then did some rafting.

I’d love to shop around the boutiques in the city which might bore you, so it’s a good way to split up activities without coercing someone onto the bridge.

Here’s a portion for people who are scared of heights only.

I once was in Cedaredge, Colorado visiting family.

The fastest way to get to the interstate was a road like the aforementioned Skyline Drive.

I was terrified, but taking the “easy” way meant going an hour out of my way.

I decided to try the road and while I was white-knuckled, I made it.

I think it’s because I was in control of the vehicle, so I determined my own fate, not a bridge I had no control over.

You can get medicine for vertigo.

I find Dramamine works just fine for me.

Always make sure you are making your own decision and not letting someone bully you into it.

I know my heart couldn’t handle the skycoaster, so I would draw a boundary there.

So... How Safe Is Cañon City Really?

When you look at the crime numbers just based on the population, Cañon City looks more dangerous than it is.

Without figuring in the tourists that come each year, there’s a one in 151 chance of being a victim of a violent crime.

There were four robberies in 2020 and two of those were in a house.

Only one was in public.

There were two homicides in 2020 and both were domestic issues.

Of the 603 thefts reported, half of them were shoplifting.

You should practice the best personal safety measures.

Always lock your car when arriving at a location.

Make sure the windows are rolled up and nothing is in plain sight in the car.

Carry a crossbody bag or backpack, so your items are attached to your body, making them harder to take.

There is no real risk in Cañon City if you are prepared and don’t let your guard down.

There are a lot of tourists and amazing views that can be distracting.

Enjoy yourself, but protect yourself too.

How Does Cañon City Compare?